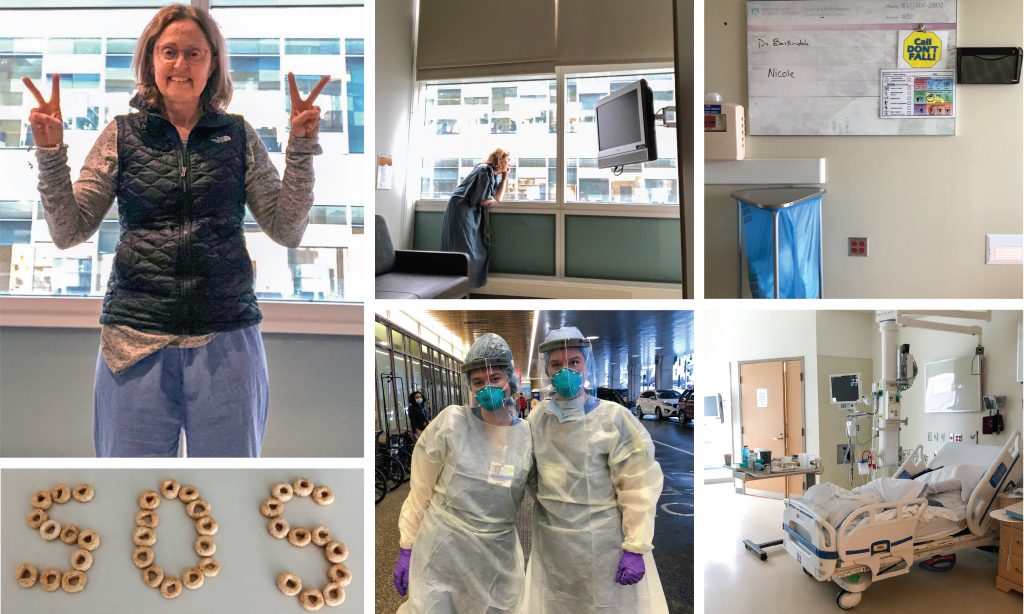 Renee Eger (upper left) chronicles her recovery from COVID-19 at the Brigham in this collection of photos.

During her six days of hospitalization at the Brigham for COVID-19, Renee Eger searched for any moment of hope or peace and clung to it like a life raft. As a fever raged in her body, she counted the minutes until her next dose of Tylenol. Every time she made it to the bathroom and back, it was a triumph.

But perhaps the moment that soothed her soul the most occurred the day she went home. While Eger prepared for discharge, her physician, Ebrahim Barkoudah, MD, MPH, associate director of the Hospital Medicine Unit, stopped by to wish her a tender goodbye — a memory that now brings tears to her eyes.

“He put his hand on my shoulder, and he squeezed it just a little bit. I can’t tell you how healing that touch was,” she said. “I don’t even know if he knew how much that meant to me.”

Eger, an obstetrician gynecologist at Women & Infants Hospital in Providence, R.I., came to the Brigham after her symptoms had become too severe to manage at home. At her husband’s urging, after her breathing had become especially labored, they called an ambulance — a ride she had to take alone due to new safety precautions and visitor policies.

Although she avoided the need for intensive care, her body had been weakened by a persistent fever, shortness of breath and gastrointestinal distress. She was admitted to one of the Brigham’s Special Pathogens Units, where COVID-19 patients receive care.

Although she was frightened, Eger says she never felt alone due to the warmth, kindness and support she encountered from the moment she arrived at the Brigham. Her experience was reflected in one of the first things that Barkoudah said to her: “You’re a member of our family now.”

Despite working behind layers of personal protective equipment (PPE) and needing to limit their time in her room, her nurses radiated unwavering compassion, she added. As a health care provider herself, Eger understood how heart-wrenching it likely was to deliver care under such constraints.

“Nurses want to be at the bedside, hold your hand, rub your back and sit with you. They want to give you their time. They want to because nurses are healers,” she said. “I had so many nurses, and I knew that every single one of them that walked through my door had a different story to tell. Maybe they were feeling all in, that this was their calling, but maybe they were terrified for their lives. I was just so grateful, and I tried to say it every single time that they were taking care of me.”

Eger said she was impressed with how thorough the care team was in observing infection control protocols, including the use of a colleague dedicated to monitoring safe PPE donning and doffing.

“They really followed protocol. I watched it. I witnessed it,” she said. “I thought that they were role models for how hospitals should be doing this.”

Eger also found inspiration in her interactions with some staff members she never met in person.

Food Services staff who took her meal orders by phone each day became some of her biggest cheerleaders after the disease wreaked havoc on her sense of taste, first wiping it out entirely and then replacing it with a persistent, foul taste in her mouth. Between that and debilitating gastrointestinal symptoms, Eger had hardly any appetite. Still, she needed to keep up her strength.

“They were the kindest people,” she said. “They were like therapists for me. That was one of the few times of the day I would laugh because they were so great. They’d encourage me and say, ‘Why don’t we get you a little extra Jell-O today?’ or, ‘Oh, honey, you’ve got to try the black-and-white frappe. It’s our best seller!’”

Today, more than a month after she first became sick, Eger said she continues to experience some lingering symptoms but has mostly recovered. As she awaits clearance to return to work, she has been reflecting on her gratitude for her Brigham care team and the resilience of the human spirit.

“Sometimes, you just have to call on your inner strength,” she said. “For some people, that’s a religious thing. I’m not a religious person myself, so I see it as needing to put on my big-girl boots with the pointy toes and get through it.”