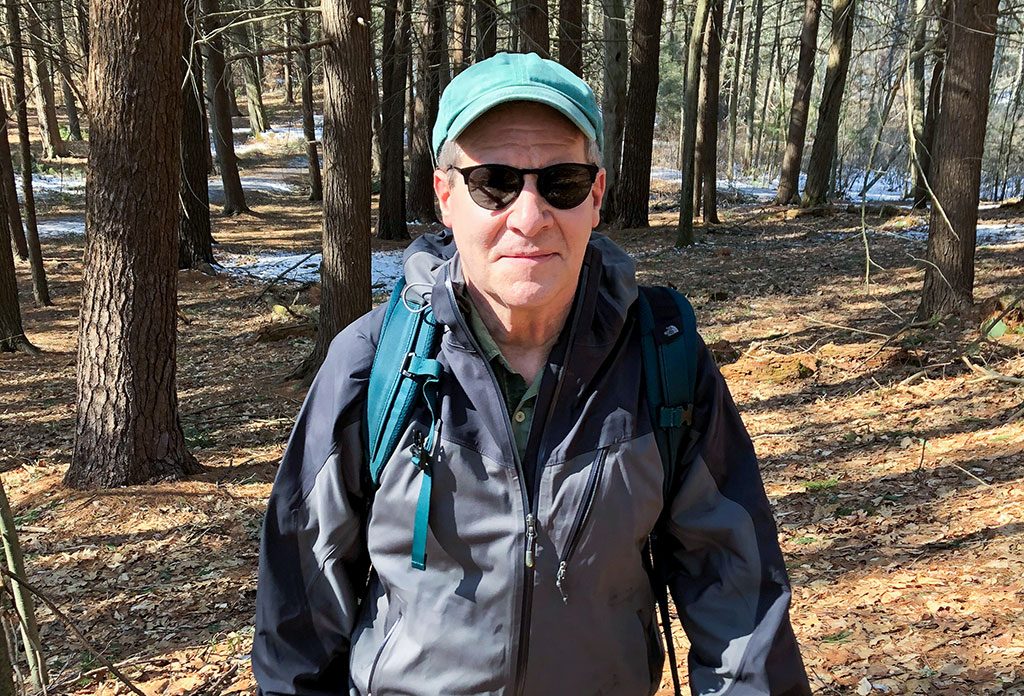 George Araneo enjoys a hike in Maudslay State Park in Newburyport about a month after his procedure.

George Araneo’s life changed forever last October. Walking home from dinner on Halloween night, Araneo, 66, suddenly became unconscious and fell to the ground. Having no idea what just happened or why, his next memory is waking up on the sidewalk. Today, the avid cyclist, runner and hiker is on the road to recovery, thanks to the lifesaving care he received at the Brigham. He’s back to exploring his favorite walking trails and working out at the gym. He’s even entertaining a future cross-country bike trip — an activity he worried might not be possible when he got sick.

Two years ago, Araneo, who lives in Newburyport, was at a general check-up when his physician heard a strong heart murmur — an unusual sound heard between heartbeats. He was sent for an echocardiogram and was diagnosed with aortic stenosis, a common but serious disorder in which blood is unable to flow freely from one of the heart’s valves to the body’s main artery, the aorta.

Experiencing no symptoms prior to this diagnosis, Araneo was shocked when he received this news. He continued to live as much of a normal life as possible following that appointment, but in 2019 he noticed cardio exercise was becoming more difficult and subsequently scaled back his workout routine.

It was not until that evening last fall when Araneo knew his heart problems were more serious than he realized.

An Alternative to Surgery

After seeing his cardiologist in Brookline, Araneo was referred to the Brigham, where his care team began preparing to replace his heart valve. Upon being evaluated at the Brigham’s Structural Heart Clinic, Araneo learned that he was a candidate for transcatheter aortic valve replacement (TAVR), a minimally invasive alternative to open-heart surgery performed in the Cardiac Catheterization Lab.

Traditionally reserved for sicker, older patients in their late 70s and 80s who have other health complications — and for whom surgery carries higher risks — TAVR uses advanced imaging to help specialists guide a catheter into the heart through a small incision in the groin and insert a replacement aortic valve. Last year, the U.S. Food and Drug Administration approved the clinical use of TAVR for low-risk patients like Araneo.

Interventional cardiologist Pinak Shah, MD, medical director of the Brigham’s TAVR program, said Araneo was a good candidate for TAVR because he was in great physical shape and had the ideal valve anatomy for obtaining a positive result from the procedure.

“He is definitely one of the more active and fit patients whom we have treated with TAVR,” Shah said. “He is in excellent physical condition, and our team wanted to avoid surgery in order to help him get back to his activities sooner.”

When Araneo heard the news that he would not need open-heart surgery, he relaxed instantly.

“As soon as I walked into the Brigham, I felt safe and secure,” he said. “I always knew I was in good hands and that my comfort was top priority for my care team.”

Araneo underwent a TAVR in January, and the procedure was a resounding success. Immediately afterward, he was transported to the Cardiovascular Recovery Room and was speaking with friends 30 minutes later, said cardiac surgeon Tsuyoshi Kaneko, MD.

“TAVR is a game-changer in the management of aortic stenosis,” Kaneko said. “Traditional open-heart surgery would have required George to stay in the hospital for four to five days, and he would have had at least six weeks of recovery time. Instead, he was discharged the next day and almost fully recovered within a week.”

Araneo is grateful for the care he received at the Brigham and was elated to return to his normal routine just days after the procedure.

“I had the surgery on Thursday, and I was walking out of the hospital at 2 p.m. that Friday,” Araneo said. “The procedure was just unbelievable. I got in a cab from the Brigham to North Station and was on the train heading home before I knew it.”

Now, he’s back at the gym, getting outside as much as possible and researching upcoming cycling events.

“My entire experience at the Brigham was incredible,” Araneo said. “I met great people who took such great care of me.”

Kaneko said the Brigham Heart Team hopes more people will be able to benefit from this minimally invasive procedure now that it’s been approved for a larger patient population.

“It is a great joy for us to see our patients recovering so quickly following the TAVR procedure,” Kaneko said. “Our dream is to treat more patients like George.”

To learn more about TAVR at the Brigham, contact the Structural Heart Program at 617-732-7678.

One Response to “‘A Game-Changer’: Cardiac Procedure Heals Patient’s Heart”