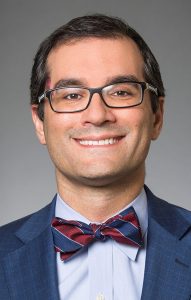 In the largest study to date of skin cancer rates among gay, lesbian or bisexual individuals, a team of Brigham investigators found important differences in skin cancer prevalence among sexual minorities in the United States. Rates of self-reported skin cancer were higher among gay and bisexual men compared to heterosexual men, but lower among bisexual women than heterosexual women. The team’s results were published in JAMA Dermatology.

Arash Mostaghimi, MD, MPA, MPH, director of the Brigham’s Dermatology Inpatient Service, and colleagues analyzed data from the U.S. Centers for Disease Control and Prevention’s annual Behavioral Risk Factor Surveillance System (BRFSS) surveys from 2014 to 2018. The BRFSS interviews approximately 450,000 adults for the survey each year, and only began asking about sexual orientation and gender identity in 2014.

“This is the first time we’ve been able to look nationally at data about skin cancer rates among sexual minorities,” said Mostaghimi.

After analyzing data from 37 states, Mostaghimi and colleagues found that 8.1 percent of gay men and 8.4 percent of bisexual men had a history of skin cancer, compared to 6.7 percent of heterosexual men — a statistically significant difference. Women fared somewhat differently. Lesbian and heterosexual women had a similar rate of skin cancer (5.9 percent and 6.6 percent, respectively), while bisexual women had a considerably lower risk at 4.7 percent.

The survey did not collect information about risk factors for skin cancer. However, smaller studies have reported higher use of indoor tanning beds, a known risk factor for skin cancer, among gay and bisexual men.

The study has important implications for patient education and community-outreach initiatives for reducing skin cancer risk.

“This helps inform the nation about how to allocate health resources and how to train future physicians,” Mostaghimi said. “As a next step, we want to connect with sexual-minority communities to help identify the cause of these differences in skin cancer rates.”

The findings also reinforce the value of asking questions about sexual orientation and gender identity in national health surveys, he added.

“We have uncovered a clinically meaningful health variation,” Mostaghimi said. “If the BRFSS survey had never asked questions about sexual orientation and gender identity, we would never have known that these differences exist.”