In honor of Valentine’s Day, Brigham Bulletin is spotlighting two couples whose affection for their work at the Brigham is outmatched only by their love for each other.

Chance Encounter in the MICU Leads to Love 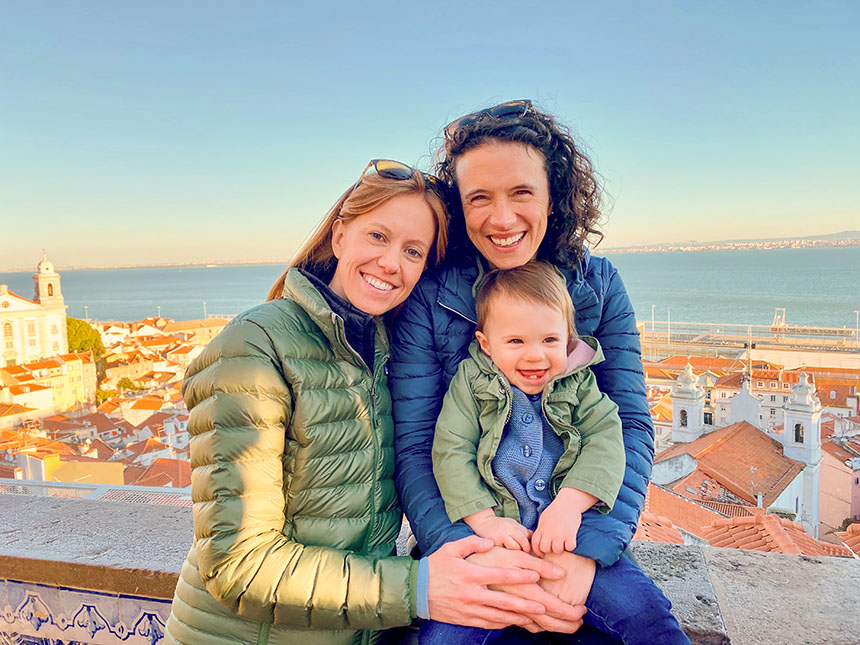 From left: Jessie Brain and Mary Montgomery enjoy a recent vacation in Lisbon, Portugal, with their daughter, Cora.

Mary Montgomery, MD, was a first-year fellow in the Division of Infectious Diseases when she received a page for what would become one of the most significant patient consults in her career, although not quite for the reason you might expect.

In 2013, she was called to the Medical Intensive Care Unit (MICU) to provide her perspective on a patient with persistent fevers. The unit was familiar to Montgomery in several respects. In her third year of internal medicine residency, she worked the overnight shift in the MICU. During that time, she grew close to one of her colleagues, Jessie Brain, MSN, FNP-C, RN, CCRN, a critical care nurse in the unit since 2008.

When Montgomery returned to the unit for the consult, Brain was among those caring for the patient. More than a year had gone by since the two last saw each other, but their initial spark was quickly rekindled and they began dating soon after.

“Luckily, the patient was on droplet precautions, so the masks somewhat hid our mutual blushing,” Brain joked.

Today, Montgomery is an attending physician in Infectious Diseases who specializes in caring for patients with HIV. Brain continues to practice in the MICU and recently earned her family nurse practitioner degree, with hopes of becoming a palliative care nurse practitioner.

As a couple, their shared clinical experiences have enriched their marriage and strengthened their bond.
“Mary truly understands the intricacies and complexities of caring for critically ill patients. At the end of an emotionally challenging day, it is such a relief to come home to someone who understands what it is like to lose a patient,” Brain said. “The other interesting piece that emerged is I feel like I have a unique insight into the immense challenges of being an intern or resident in the ICU. This has sparked an interest in improving the physician-nurse relationship and learning how we can work more cohesively while respecting one another’s autonomy.”

In all respects, they hold each other in high regard.

“I admire Jessie’s unwavering and immense compassion for her patients and their families. She truly devotes all that she has to lessening their suffering both from the disease and also from the anxiety and worry that so often accompanies illness,” Montgomery said. “She is also an incredible wife and mother, and I feel so lucky that our paths just happened to cross.”

Brain described her admiration for Montgomery’s ability to form trusting relationships with patients and her exceptional skill as an educator and mentor to the next generation of health care professionals.

“I love meeting medical students Mary has taught because their faces immediately light up, and they often say, ‘She is one of our absolute favorite professors,’” Brain said. “It melts my heart every time.”

In 2018, the couple celebrated the birth of their daughter, Cora, at the only place they could imagine doing so — the Brigham.

“There was no question where we were going to deliver our daughter, and our experience with the Antepartum, Labor & Delivery and Postpartum staff at BWH could not have been better,” Brain said. “We were grateful the staff treated us like every other patient, as we knew next to nothing about what it was like to have a baby, despite our professions. We also felt safe and respected as an LGBTQ couple, for which we will be forever grateful.” 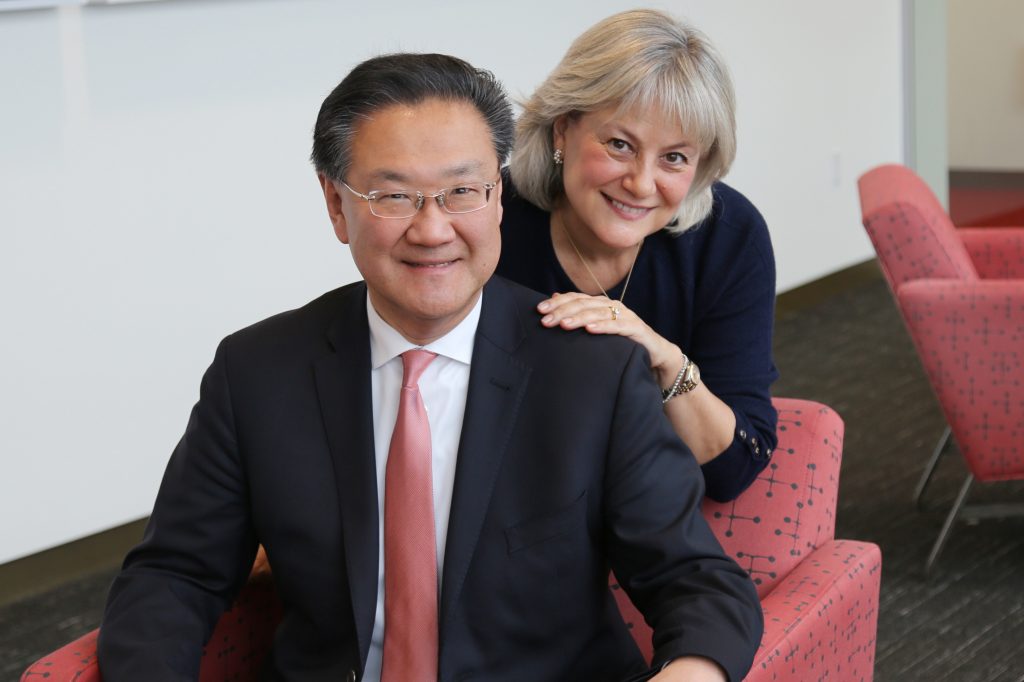 When Elena Aikawa, MD, PhD, arrives each morning at the Center for Interdisciplinary Cardiovascular Sciences (CICS), there is one non-negotiable part of her daily routine: Before she even goes to her office, removes her coat or puts her belongings down, she pokes her head into the office across the hall to say good morning to her colleague, research collaborator and husband, Masanori Aikawa, MD, PhD.

It’s one of the countless expressions, big and small, of love and appreciation that the couple shares in their lives and work together. Whether they’re collaborating side by side in two labs, celebrating a scientific breakthrough or comforting one another after a grant-funding setback, the Aikawas describe their personal chemistry as their greatest professional asset.

Masanori added: “We have different personalities, but a shared value — innovation. We have always wanted to do something new rather than follow in others’ footsteps.”

The two first met in 1995 as early-career investigators when their mentors — Peter Libby, MD, and Frederick Schoen, MD, PhD — suggested they collaborate on a project. Masanori, then a fellow, was studying how lowering dietary cholesterol can reduce plaque buildup and inflammation in the arteries. He needed someone who could conduct histological analysis, which involves examining sections of tissue under specialized microscopes. Elena, a pathologist by training, was just the person for the job.

One day while looking at a cross-section of an artery, Elena excitedly called over Masanori to show him something she identified. He was immediately wowed by her skill, expertise and passion for discovery.

“She’s really good at realizing something others miss,” Masanori said.

The two remained colleagues for several years, both saying they weren’t even thinking of romance as they continued to develop and conduct studies together — supporting and rooting for one another in their research endeavors and academic careers.

They married in 2003, with many Brigham colleagues, including their matchmakers, in attendance. “It’s truly a Brigham romance,” Masanori said.

Today, Masanori is the founding director and Yoshihiro Miwa Associate Chair of CICS, a collaborative effort between the Brigham and Kowa Company Ltd., a Japanese company whose focus includes pharmaceuticals. He is also the principal investigator of the Brigham’s Center for Excellence in Vascular Biology.

While some couples might be reluctant to entwine their personal and professional lives so closely, the Aikawas can’t imagine it any other way.

“Sometimes we’ll go to New York to see a performance at the Metropolitan Opera House, and we purposefully drive so that we can have more time together and talk in the car,” Elena said. “At work, we even miss each other if one of us is giving a talk and not in the office that morning.”

Valentine’s Day at the Brigham: Fun Facts from The Shop on the Pike

♥  The gift shop’s average daily sales double in the days before the holiday.

♥  Most popular sweets for sweethearts at the Brigham that week? Godiva boxed chocolates.

♥  Another Valentine’s Day best-seller at the shop are mugs with hearts — anatomically correct designs, of course.

2 Responses to “A Match Made at the Brigham: Celebrating Tales of Love”