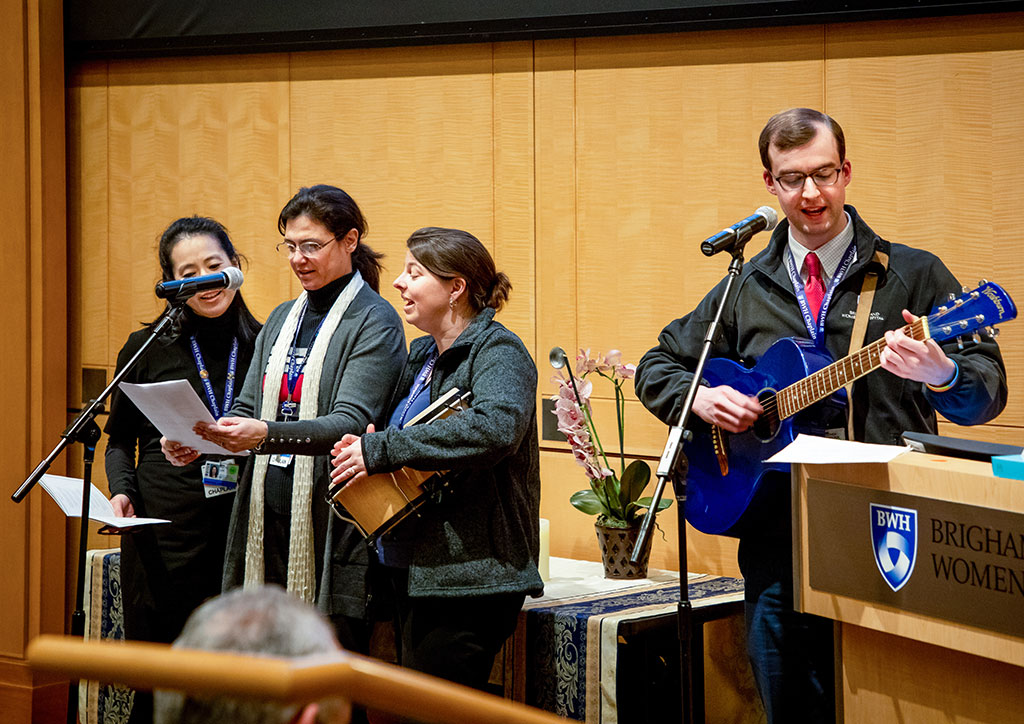 Uplifted by solidarity and song, the Brigham community came together to show its support for the people of Puerto Rico during a service on Jan. 29. Since December, the island has been devastated by hundreds of earthquakes and aftershocks, leaving many regions and cities there in disarray.

Organizers of the event, hosted by Spiritual Care Services and held in Bornstein Amphitheater, said they sought to not only acknowledge the recent natural disasters but also celebrate and honor Puerto Rico and its culture. The bilingual service featured scripture readings, a candle-lighting ceremony, a photo slideshow depicting scenes from the island, live and recorded performances of Puerto Rican music and remarks from staff who shared stories about what Puerto Rico means to them.

“The ceremony was very beautiful. I feel very grateful for the thoughtfulness towards our people. It was a beautiful gesture,” said Nelly Pardo, an Environmental Services employee and native of Puerto Rico, who contributed to the event planning and music selection.

Patty Lee, a chaplain in Spiritual Care Services, expressed her gratitude for all who came to collectively celebrate Puerto Rico and mourn its many losses.

“It was an honor to be part of such a moving prayer service and to feel the warmth and love that is present at the Brigham in our community of strength and solidarity,” she said. “We join together in prayer and hope as Puerto Rico continues to rebuild its beautiful island together.”

George Player, CPE, FMA, vice president of Facilities and Operations, was among those who saw a need to bring the Brigham community together and helped organize the service to support colleagues affected by the earthquakes.

“I want our employees to know that we are family at the Brigham, and we are here to support each other — always,” Player said. “There are events that happen every day all over the world, and it can be difficult to have family living in an area affected by a natural disaster, deal with the unknown and wonder if everyone is safe.”

For Monique Cerundolo, MA, BCC, a staff chaplain in Spiritual Care Services, it was vital that the event centered on the themes of family and hope. As a member of the Hispanic community herself, Cerundolo, who is Uruguayan, also felt a personal and special connection to the service.

“We want people to know that they aren’t alone,” Cerundolo said. “In Puerto Rican culture, there is a tremendous sense of community. The concept of familia is very vivid. We hope those who attended found the event to be comforting and unifying.”

Small prayer cards were handed out during the event that included various prayers and blessings in Spanish. By the event’s conclusion, all 150 cards had been distributed. Many attendees told organizers they were going to hold on to the cards and share them with loved ones. For Kevin Long, MEd, operations project coordinator in Spiritual Care Services, it was a touching symbol of community.

A Message of Hope

During one especially moving part of the program, organizers played a recording of “Almost Like Praying,” a song written by Hamilton creator Lin-Manuel Miranda, who is of Puerto Rican descent, and performed by him and more than 20 Latino musicians. Written in 2017 to support the victims of Hurricane Maria, the lyrics individually reference all 78 of Puerto Rico’s cities and towns.

“We wanted to make sure the music we played during the ceremony was something that our Puerto Rican employees could identify with,” Cerundolo said. “That song is very comforting, unifying and supportive for the Puerto Rican people.”

One Response to “‘We Are Family’: Brigham Community Stands with Puerto Rico”