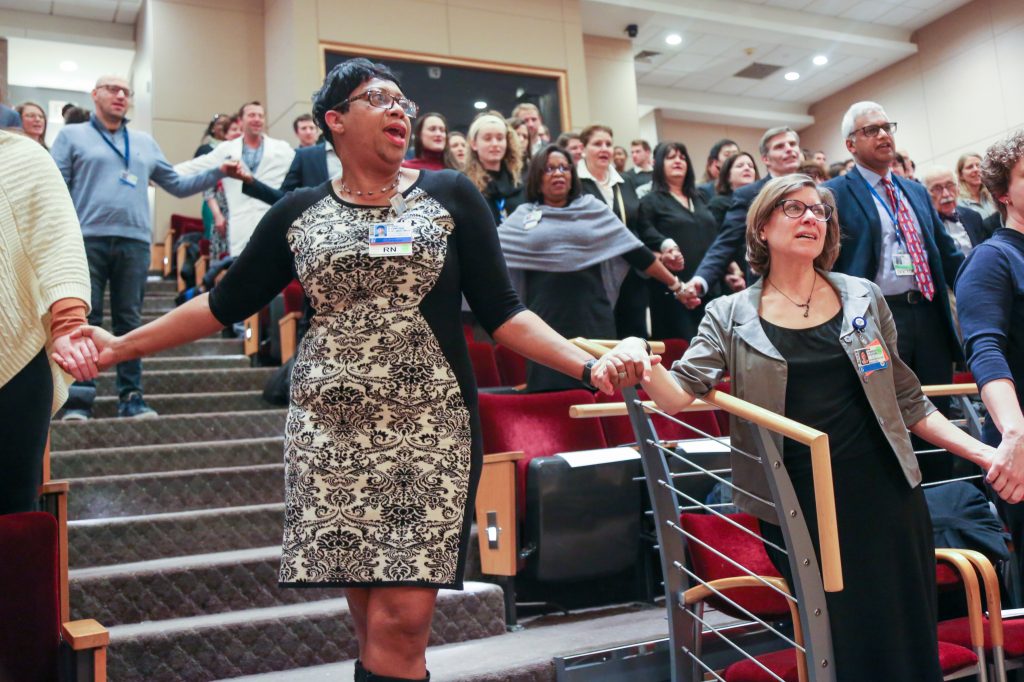 For Nadia Raymond, MSN, MHA, RN, the memory of returning to her home country of Haiti days after the island’s 2010 catastrophic earthquake is still painfully vivid. One of the worst natural disasters in the nation’s history, the 7.0-magnitude quake left a devastating wake of death, trauma and destruction.

Raymond, a professional development manager in the Brigham’s Center for Nursing Excellence and co-leader of EqualHealth’s Women’s Leadership Roundtable, recalled what it was like gazing out the window during her ride from the airport to where she had been deployed to support the relief effort.

Parks, architecture, the presidential palace, her old high school, a new nursing school — all destroyed in the disaster, which killed an estimated 230,000 people and injured countless more. At that time, Raymond was among the many Brigham faculty, staff and trainees who responded to the humanitarian crisis to support their Haitian health care colleagues on the ground.

Reflecting on the experience during a recent event in Bornstein Amphitheater to commemorate the disaster’s 10th anniversary, Raymond said her colleagues’ swift, compassionate response and the courage of those affected by the quake gave her hope — a feeling that continues to shine brightly a decade later.

“I witnessed, as most of you have, that when our BWH community and Haiti came together as one, we remained strong, we remained resilient and we never quit,” she said. “Our hope never dies.”

The Jan. 10 event, “Many Hands Make the Burden Light — Remembering the 2010 Haiti Earthquake and Recovery,” provided an opportunity for the Brigham community to come together again to honor the lives and memory of those who were lost and recognize the teams and individuals who helped in the recovery.

Stephanie Kayden, MD, MPH, vice chair of Strategic Partnerships and chief of the Division of Global Emergency Care and Humanitarian Studies, who also assisted with relief efforts, recalled the tremendous contributions of everyday Haitians in the aftermath of the disaster.

After Kayden and her colleagues set up a field hospital outside Port-au-Prince to supplement overwhelmed trauma centers in the area, local schoolchildren were invaluable volunteer translators for the international response team. Grandmothers in the community served as “tent mothers,” offering comfort for unaccompanied children. Pastors organized spiritual services at the facility to help patients heal. Haitian medical students who had been studying in Cuba raced home to provide additional clinical support at the field hospital.

“All of these people had the resilience, smarts, organizational skills and natural talent for bringing their community together. The field hospital was a success because of them — not because of us,” Kayden said.

Paul Farmer, MD, PhD, chief of the Division of Global Health Equity and co-founder of Partners In Health (PIH), recognized the remarkable progress Haiti has made in rebuilding, both in terms of physical infrastructure and systems of support, in the face of tremendous challenges since the quake.

In one example, Farmer and other speakers highlighted the Hôpital Universitaire de Mirebalais (University Hospital), a teaching hospital established in partnership with the Haitian government, the Brigham, PIH and other Harvard-affiliated institutions.

Located in the city of Mirebalais, the University Hospital was recently awarded institutional accreditation by the Accreditation Council for Graduate Medical Education, the entity responsible for the accreditation of medical residency and fellowship programs. The news, announced on the eve of the earthquake’s 10-year mark, made Haiti the world’s first resource-poor country to achieve this prestigious status.

Jennifer Goldsmith, director of Administration and Programs in the Division of Global Health Equity, said she and her colleagues felt it was important to commemorate this date to reaffirm how the tragedy touched so many at the Brigham and affected them as family members, friends and caregivers of the victims.

“To see so many people from our Brigham community together — acknowledging both the loss and what good has come of this tragic event — was very meaningful to me, personally, and reflective of the heart of the Brigham,” Goldsmith said.

To close the event in Bornstein, Farmer and Joia Mukherjee, MD, MPH, of the Division of Global Health Equity, invited attendees to stand, hold hands and join them in an impromptu song in Haitian Creole, inspired by a scene from the documentary Bending the Arc. The song’s opening lyric: Tout moun se moun. Every person is a person.

View a webcast recording of the event.