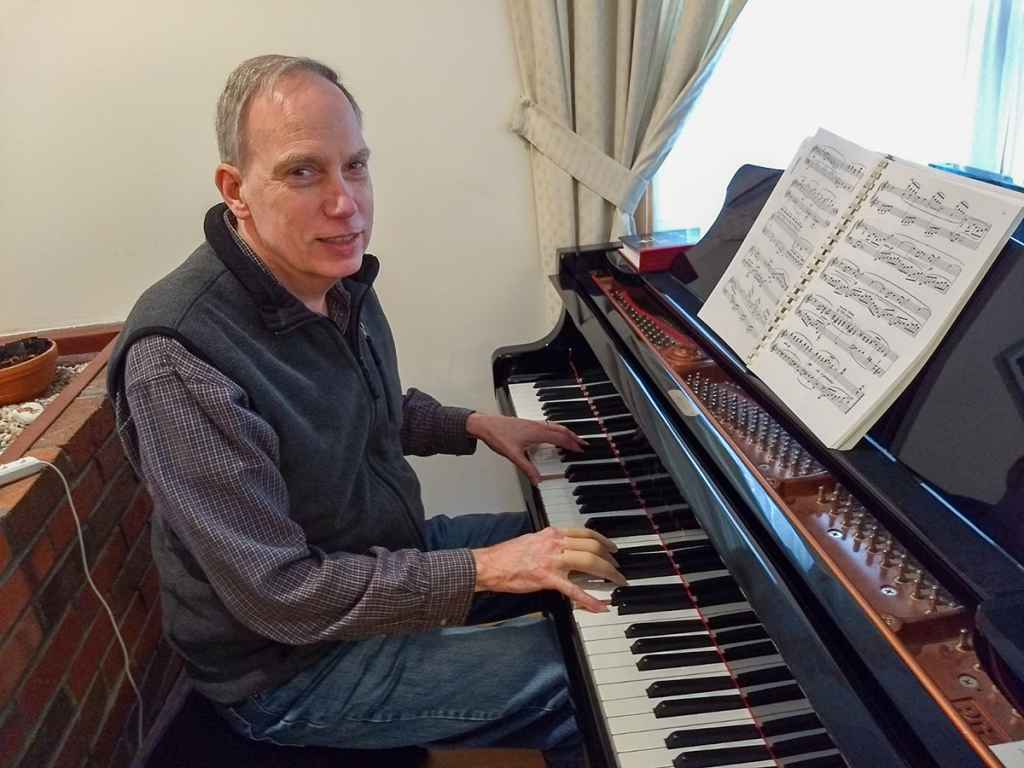 Murray Daniels practices on the piano using prostheses on his three injured fingers.

For as long as Murray Daniels can remember, he has felt most at home on a piano bench.

Around age 5, he began experimenting on the piano, trying to recreate songs he had heard elsewhere. That early start led to a lifetime of musicianship, mostly self-taught. For the past decade, Daniels, now 65, has played the keyboard in a cover band, performing songs from the Beatles, Billy Joel and Elton John, among other artists, at local charity events. Over the years, he has also served as a substitute organist at his local church.

“Music is a significant part of my life,” said Daniels, a former Air Force pilot and recently retired information systems engineer. “It engenders an emotional response both in the person creating the music and the person listening to it. It’s a form of emotional communication when done well, and I don’t mean when it’s performed without mistakes — rather, when you put your heart and soul into it.”

This deep connection to song made it especially devastating when he experienced a traumatic hand injury 15 months ago due to a snowblower accident, resulting in the partial loss of the three middle fingers on his right hand.

But thanks to the advanced, expert care he received at the Brigham, Daniels is back to doing what he loves most — making music.

On the morning of Nov. 16, 2018, Daniels looked out the window of his Bedford home to survey the unpleasant job ahead of him: removing several inches of wet, heavy snow that had piled up overnight.

“I try to be conscientious about clearing it quickly,” he explained.

He brought his snowblower out and got started, but it wasn’t long before the discharge chute clogged due to the snow’s slushy composition. Daniels released the controls and examined the obstruction.

“I was impatient. Being an engineer, I thought I understood how the snowblower worked and where the moving mechanisms were. I was wrong on both accounts,” he said. “There was some residual tension in the mechanism. Even though I had taken my hands off the controls and it appeared motionless, I put my hand where I shouldn’t.”

Once the clog began to dislodge, the blades abruptly rotated once more before Daniels could pull his hand away. He and his wife rushed to a nearby hospital for emergency care.

Knowing the Brigham had a renowned hand and upper-extremity trauma service, Daniels and his family advocated for his transfer to the Brigham for his surgery.

Lydia Helliwell, MD, of the Division of Plastic and Reconstructive Surgery, was part of the multidisciplinary team who performed the surgery. In the operating room, the team focused on closing the wounds in a controlled manner and repairing the nerves to minimize the chance of hypersensitivity, she explained.

“We’re accustomed to managing complex injuries. The surgical team, colleagues in the Emergency Department and occupational therapists are all able to work together and deliver great outcomes for our patients,” Helliwell said. “That said, surgery is only half of the patient’s recovery. The other half is the therapy to get their motion back, and motivated patients such as Murray are the ones who do the best. I can’t take credit for all of his hard work.”

Daniels described his experience at the Brigham as nothing short of exceptional.

“I can’t say enough good things about Dr. Helliwell and all of the staff, especially the nurses, who were considerate, thoughtful and attentive to all of the things you take for granted,” he said. “I would not hesitate to recommend the Brigham to anybody.”

Back on the Bench

As Daniels embarked on recovery, he was eager to return to the piano.

“Music is terribly important to me,” he said. “I had to get back to it right away.”

Within two weeks of discharge from the Brigham, he was performing again with his band, although only with his uninjured left hand. Daniels quickly became aware of his new constraints as a musician. His three injured fingers were not long enough to reach between the black keys on a piano, which significantly limited what he could play. The reconstructive surgery had also thickened his fingers, affecting his dexterity at the keys.

During a follow-up appointment at the Brigham last year, he mentioned the concern to Helliwell, who suggested he consider prostheses and provided a referral to the Hanger Clinic.

By April, Daniels found a set of prostheses that enabled him to play the piano comfortably. About six weeks later, he was back to practicing on his home keyboard. Soon after, he returned to doing live performances with his bandmates and playing again at his church.

Reflecting on his experience, Daniels hopes others can take two lessons from his story. First: Never, ever put your hand in a snowblower. Second: It is possible to find fulfillment after a traumatic injury.

“I feel very lucky that I only lost what I lost and that I was able to get back a lot of my life,” Daniels said. “I understand that people who have the same kind of injury may lose more or less than what I did. Either way, I would encourage them to continue to try to get what they can out of life and don’t give up.”

One Response to “On a High Note: After Traumatic Hand Injury, Patient Returns to the Piano”