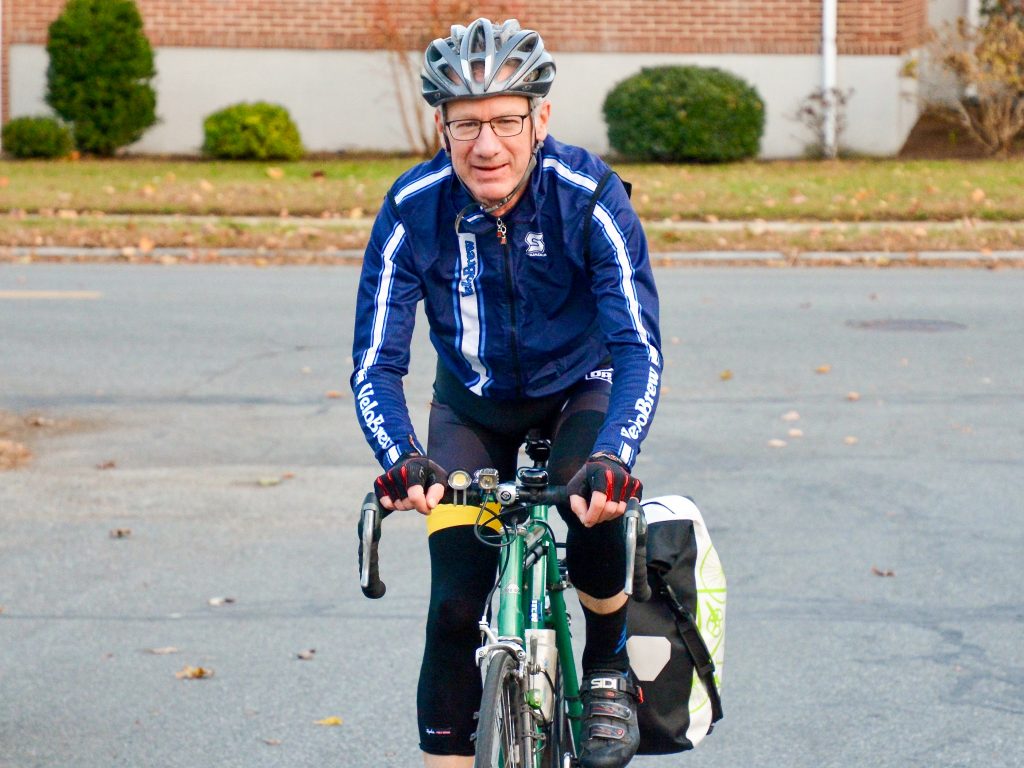 Arlington resident David Kenney, 54, commutes on his bike eight miles to his office in Back Bay year-round. His first morning ride in July was like any other except for one important detail: That day, he was biking with a new heart.

Kenney is undeniably athletic — and tenacious. He ran cross-country in high school and college. In his 20s, weary of running, he took up cycling. In his 40s, he became a competitive rower, despite a sudden, serious heart condition.

“In my late 20s, I started having arrhythmias, and my arrhythmia actually turned into ventricular tachycardia,” which causes a rapid heartbeat, Kenney said. “I’d basically go into a high heart rate and have to be hospitalized.”

For nearly two decades, Kenney’s heart condition was kept in check. There were setbacks and comebacks, including a shocking diagnosis in 2008.

“I was getting my annual physical,” he recalled. “The echocardiogram showed my ejection fraction (percentage of blood pumped out of the ventricles) was greatly diminished, and that really alarmed the doctor. He said, ‘You have heart failure.’ I couldn’t believe it.”

Although Kenney was slowing down, he kept moving. His doctor called him “an outlier.” And he was — for a while.

“I was very fortunate through cycling and rowing to maintain my wellness,” he said. “I even competed in the Head of the Charles in 2012 and again in 2015, but then I actually started feeling the effects of the heart failure.”

A Bridge to Transplant

Kenney’s job as an international forester and director of acquisitions for the Hancock Timber Resource Group brought him and his family to Boston from Jacksonville, Fla., in 2016. He settled into a rhythm, a routine that included frequent travel all over the world. His heart, however, continued to worsen.

This March, Kenney was referred to the Brigham’s Heart & Vascular Center for its expertise with advanced heart failure and complex cardiac conditions. He was immediately admitted with cardiac failure. His heart was so enlarged it could no longer pump effectively. His only option was a heart transplant.

“He was supposed to see me in the office as a new consult,” recalled Michael Givertz, MD, medical director of the Heart Transplant and Mechanical Circulatory Support Program. “He became so sick that we had to urgently admit him to our service for heart failure management and transplant evaluation.”

The evaluation process to become a heart-transplant candidate shifted into overdrive. Kenney was approved and placed on the transplant waiting list before the end of the month.

To stabilize Kenney until his donor heart arrived, he had two surgeries to install an intra-aortic balloon pump (IABP) — first in his leg and then a few days later it was moved to his upper chest. “I started immediately feeling better,” he said.

The pump bolstered his circulation and allowed him to get up out of his bed and walk the hospital floor.

“The IABP provided enough circulatory support for Mr. Kenney to walk around the coronary care unit multiple times a day while waiting for a donor heart,” Givertz said. “His strength improved as did his nutrition and overall organ function.”

In April, in typical tenacious fashion, Kenney was not wheeled but walked into the transplant operation room to receive his new heart. Eighteen days later, he returned home. Now, more than six months post-transplant, he feels great and has resumed his active lifestyle.

One Response to “Heart Transplant Helps Patient Get Back in Motion”