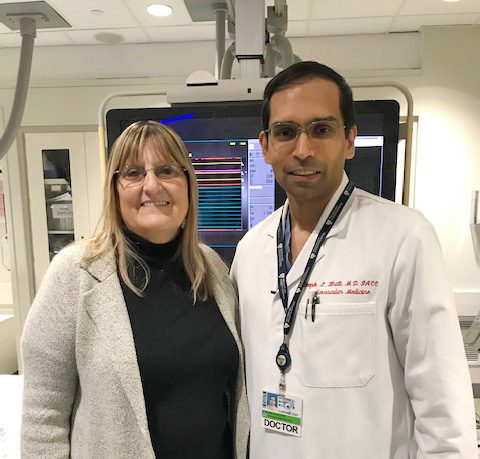 Two years ago, on the eve of Thanksgiving, Ann Taylor and her family feared the worst.

After going to a community hospital near her home in Merrimac, Mass., to seek care for shortness of breath, Taylor learned she had experienced a heart attack, brought on by advanced cardiovascular disease. She was rushed to the Brigham, where her care team made a distressing discovery: Three of the four major arteries serving Taylor’s heart were 99 percent blocked. The fourth had a 90 percent blockage.

Her fragile condition and complex medical history meant Taylor was far too sick to survive coronary bypass surgery — one of the most common ways to restore blood flow to the heart when multiple arteries are blocked. Deepak L. Bhatt, MD, MPH, executive director of Interventional Cardiovascular Programs, presented another option to her and her family: a less-invasive procedure performed in the Cardiac Catheterization Lab to reopen her arteries using five thin tubes called stents.

While the procedure wouldn’t require open-heart surgery, Taylor and her family learned it was still extremely risky — offering only a 20 percent chance of survival — due to her frail state. A nurse gently suggested to David, her husband, that he contact their loved ones so that they could say their goodbyes. A priest was called to deliver Taylor’s last rites.

But seemingly against all odds, Taylor survived the procedure and rapidly recovered. On the recommendation of her care team, she returned to the Cath Lab the following week to have three more stents inserted in her coronary arteries. After about three months, she was home and regaining independence — learning how to walk, talk and feed herself again.

Today, as another Thanksgiving approaches, Taylor says her heart is not only strong but also overflowing with gratitude for the multidisciplinary care team at the Brigham who saved her life and restored her health. Over the past two years, her cardiac function has returned to near-normal levels, allowing the 57-year-old grandmother of four to get back to doing what she loves most — spending time with her family.

“I don’t know how to express it except that ‘thank you’ isn’t enough,” Taylor said. “I have so much to be thankful for. Brigham and Women’s gave me the chance to continue enjoying life with my husband, kids and grandchildren. You have no idea how much that means to me.”

David echoed his wife’s appreciation for their care team’s determination, dedication and expertise.

“Anywhere else would have turned her away and sent her home, and we probably would just be waiting for a massive heart attack to occur,” he said. “Dr. Bhatt stepped up to the plate for Ann. If it wasn’t for Brigham and Women’s, she wouldn’t be with us today.”

‘Something Else Is Going On’

Part of what made Taylor’s care plan and prognosis so uncertain was her complex medical history. She lived with diabetes from age 11 to 36, eventually requiring her to undergo a kidney and pancreas transplant in 1999. She received a second kidney transplant in 2010 after the first donor organ failed.

While the transplants cured her diabetes, she continued to experience long-term complications from the disease. So, upon feeling fatigue and shortness of breath one day, Taylor said a heart attack was the furthest possibility from her mind. Having also been previously been diagnosed with cold-induced asthma, she thought the chilly November weather might be to blame for her breathing problems.

“I wasn’t sure what was happening. I was trying my inhalers, and nothing was working. I called my doctor’s office, thinking maybe it had something to do with my kidneys,” she recalled. “The nurse called me back and said, ‘This is not asthma. Get to a hospital. Something else is going on.’”

Among the potential complications that Taylor, her family and Brigham providers had to consider was how the Cath Lab procedure might affect her transplanted organs. Coronary stents are guided into the arteries with the help of contrast dye, which can be taxing on the kidneys. Fortunately, Taylor experienced no complications as a result — another unexpected outcome.

Bhatt said he’s been thrilled to see Taylor beat the odds and continue to thrive.

“Here was a woman who came to us in cardiogenic shock, which means the heart was not able to pump blood and therefore all of her vital organs weren’t getting the blood and oxygen they need to function. On top of that, she’d had at least one heart attack and multiple organ transplants,” Bhatt said. “If you put this into a predictive model, the statistics would not be in her favor. This is a wonderful example of our willingness to look beyond the numbers.”

One Response to “Giving Thanks: Patient Celebrates a Heart Full of Gratitude and Joy”