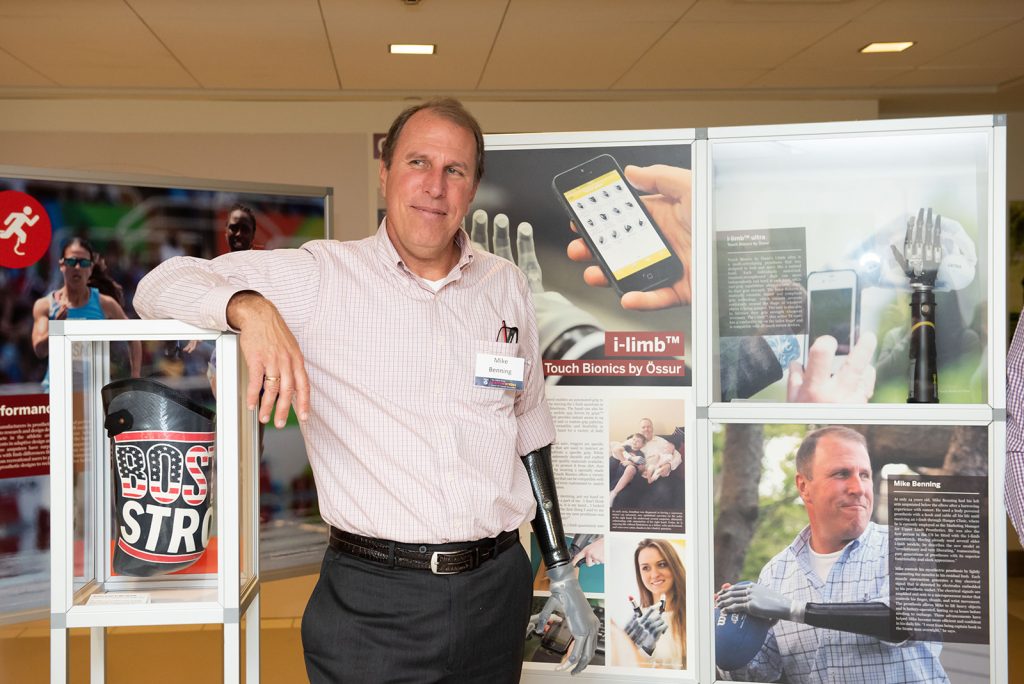 Mike Benning, who lost his left forearm at age 14 due to cancer, is one of several amputees featured in the exhibit.

A new exhibit at the Brigham showcases the past, present and future of prosthetics and how design plays a critical role in humanizing technology for amputees.

On display on the Braunwald Tower 2 mezzanine now through January, “Bespoke Bodies: The Design and Craft of Prosthetics,” is a traveling multimedia exhibition created by Design Museum Boston that highlights people at the intersection of health care, style and technology in prosthetic design. The curated collection specifically features Boston-area athletes, advocates and innovators in prosthetic design, including people from the Brigham.

Audrey Epstein Reny, co-founder of The Gillian Reny Stepping Strong Center for Trauma Innovation at Brigham Health, said the exhibit aligns with Stepping Strong’s mission to catalyze multidisciplinary collaborations to transform care — through groundbreaking innovation, effective prevention and compassionate intervention — for civilians and military personnel who experience traumatic injuries and events. The Stepping Strong Center is serving as the presenting sponsor of the exhibit.

“This is a great opportunity to expand awareness for the need to fund innovation in the trauma space, and this very dynamic, interactive exhibit showcases the type of work that the Stepping Strong Center is focused on,” Reny said.

Exhibit visitors can learn about the evolution and design process behind a range of prostheses through visual stories, historical surveys, videos and interactive models. The exhibit features over 40 stories of amputees and explores the collaborative design process of prostheses between amputees, clinicians and innovators.

One of the people featured as part of the exhibit is Brigham patient Jim Ewing. In 2014, Ewing fell nearly 50 feet from a cliff while rock climbing. The injuries he sustained left him with severe damage to the bones and nerves in his left leg. Two years later, he became the first patient to undergo a novel surgical amputation at BWFH, with support from the Stepping Strong Center.

Named in his honor, the Ewing amputation is an experimental procedure that redefines the way a traditional amputation is done. A traditional amputation disrupts the sophisticated, highly coordinated relationship between the muscles and nervous system. The Ewing amputation is designed to preserve some of these connections and allow patients’ brains to interact with a robotic prosthetic. Developed in collaboration with the Massachusetts Institute of Technology (MIT), the device enables patients to perform complex actions and feel sensation.

The revolutionary approach was developed by a clinical team led by Matthew Carty, MD, of the Division of Plastic and Reconstructive Surgery, in collaboration with Hugh Herr, PhD, and his Biomechatronics research group at the MIT Media Lab Center for Extreme Bionics. Carty, who also serves as the Stepping Strong Center’s director of Strategy and Innovation, and his team have performed the Ewing amputation on more than 20 patients to date. The team is also in the process of developing versions of the procedure for patients who require upper-extremity amputation, as well as those who have already undergone traditional amputation in the past.

Ewing, who is featured in the exhibit, hopes that projects such as “Bespoke Bodies” will begin to change the way in which amputation is viewed — from a last resort to a chance to be whole again.

“Following my accident, all I wanted was to heal and return to my life of activity and adventure,” Ewing said. “When I reached out to Prof. Herr and Dr. Carty regarding their new approach to amputation, I honestly had no idea how profoundly groundbreaking it would become. To know that I have, in a very small way, helped pave the way for this revolution in amputation and prosthetics care has been oddly satisfying but also quite humbling.”

Amanda Hawkins, exhibitions manager at the Design Museum Foundation, said working with Ewing and Carty to highlight recent surgical innovation at the Brigham exemplifies the core message of “Bespoke Bodies.”

“Advancements in surgical intervention and prosthetic design are happening every day but require collaboration between many industries and people,” Hawkins said. “We hope that anyone who sees this show can better understand the importance of collaborative, empathetic and human-centered design in any field.”

Given the Brigham’s leadership in limb and extremity reconstruction in trauma care, Carty said the hospital is a natural place to host the exhibit.

“The Design Museum’s exhibit celebrates the beauty of the adapted body,” Carty said. “It does so by highlighting the stories of individuals who have experienced limb loss and subsequent limb restoration through the marriage of biology and technology.”

On Nov. 13, the Stepping Strong Center honored five researchers with this year’s Stepping Strong Innovator Awards. Each honoree receives $100,000 to support a groundbreaking project that aims to transform trauma outcomes. Two Brigham investigators were among the awardees: