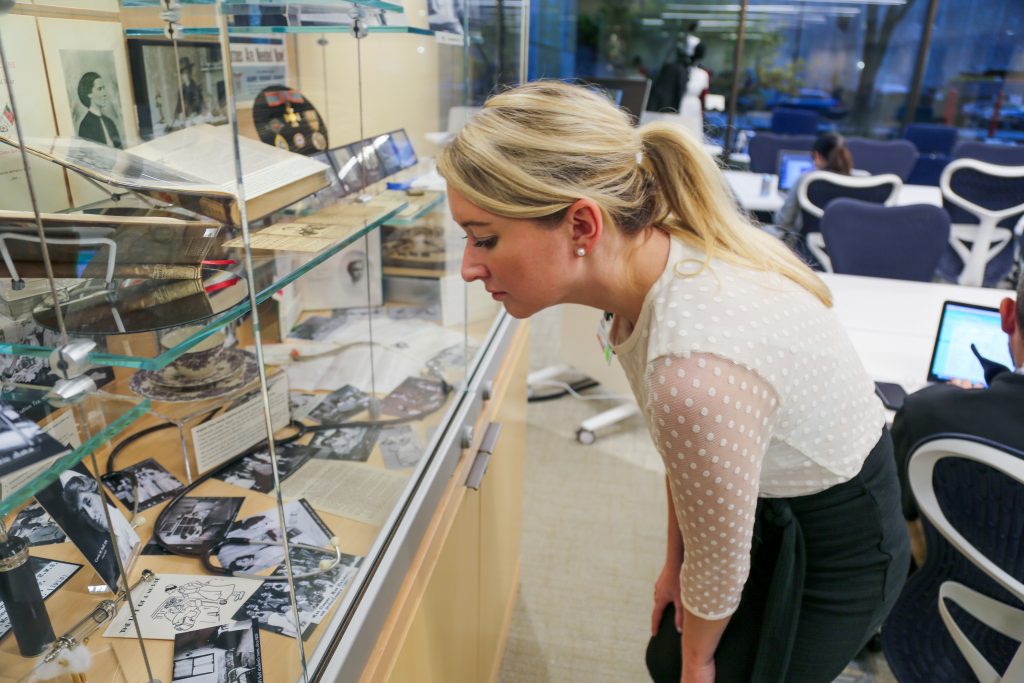 Anna De Cristofaro of the Brigham Education Institute peers into a case containing historical artifacts from the nursing exhibit.

The rich, varied history of Brigham nurses throughout the 20th century is now on display at an exhibit at the Brigham Education Institute’s Knowledge Center. Through artifacts, photos, letters and other historical treasures, the collection highlights nurses’ evolving role and contributions everywhere from the front lines of patient care to the European front during two world wars.

“It’s always good to know the roots of your profession and the legacy of service you’ve inherited as a Brigham nurse,” said Catherine Pate, hospital archivist and the exhibit’s curator. “But more broadly, everyone should understand that Carrie Hall is more than just the name of a conference room here. She revolutionized nursing and was a legendary war hero.”

Hall, who founded the Peter Bent Brigham Hospital School of Nursing in 1912, is one of several historical nursing figures featured in the collection for her military service, which included serving in World War I as the chief nurse of the American Red Cross and with Base Hospital No. 5, the “Harvard Unit,” on the front lines in France. The exhibit also highlights Brigham nurse Bernice Sinclair, who served as chief nurse for the Third U.S. Army in World War II and was the only woman on General George Patton’s staff. Other military memorabilia include a series of photographs taken by famed Brigham neurosurgeon Harvey Cushing, MD, depicting nurses and physicians from the “Harvard Unit” field hospital during World War I.

The collection includes nursing student Marie Antoinette Kendall’s handwritten course notebook from 1917-1918, in which she recorded notes from medical lectures and clinics at the Peter Bent Brigham Hospital School of Nursing that cover many subjects, including dietetics, patient care, medicine, disease, birth and delivery, and mental illness.

An intricately patterned teacup and saucer is an example of what Brigham nurses would use in the 1950s and 1960s at regular tea ceremonies. Those were conducted, according to the remembrances of an alumna nurse, “to teach us to be ladies.”

Perhaps the most eye-catching part of the collection is a mannequin dressed in the standard nursing uniform of the 1940s to 1960s — a crisp, starched white cap and dress, with a gray wool cape draped around the shoulders.

Over the past century, the nursing profession has evolved dramatically — moving from an apprenticeship model to a highly specialized field that increasingly calls for advanced degrees and certification. But throughout the decades, Pate noted, one thing has remained the same: nurses being at the forefront of patient-centered care. A portion of the exhibit, “The Timeless Heart of Nursing,” depicts this through photos from different eras showing Brigham nurses’ dedication to their patients.

“The core identity of Brigham nurses has invariably been compassionate care,” Pate said, “and that part has never changed.”

The nursing archives exhibit will remain on display through mid-2020. To view the collection, stop by the Knowledge Center, located on the Lower Pike in Thorn 127D, Monday through Friday, 8 a.m.–5:30 p.m.