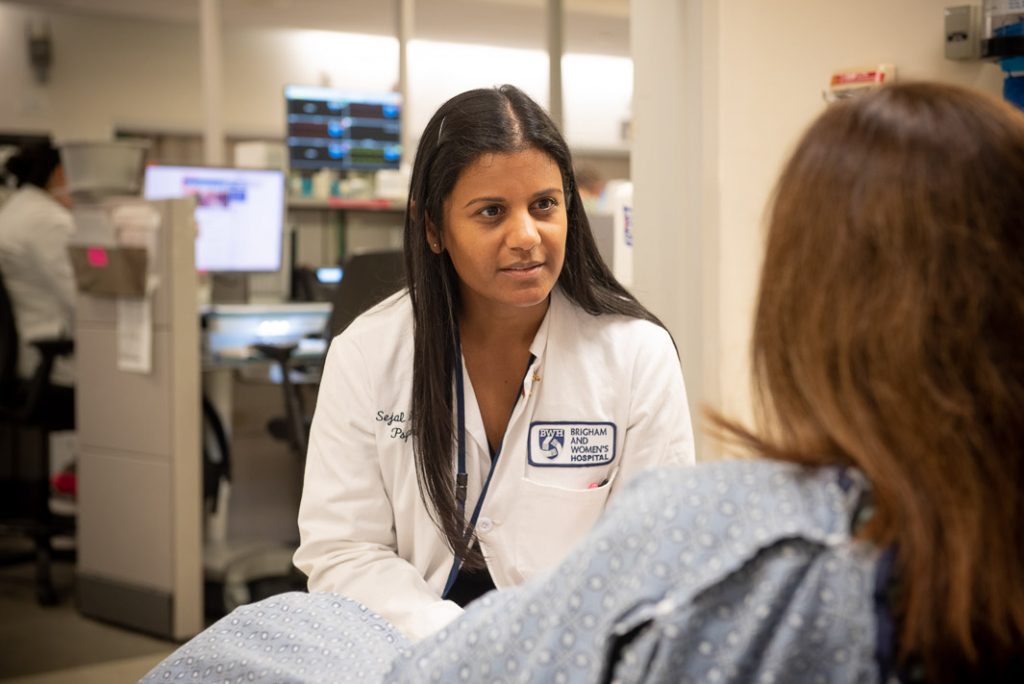 Sejal Shah meets with a patient in the ED.

The following is an excerpt from “Entitled to Hope: Odysseys in Mental Health” in the fall issue of Brigham Health magazine. Read the full story here. *All patient names have been changed to protect privacy.

At 8 a.m. on a Tuesday, Sejal Shah, MD, chief of the Division of Medical Psychiatry, headed to the Emergency Department (ED) for her morning rounds. She leads the hospital’s psychiatric consultation liaison service, the most consulted specialty throughout Brigham Health. In addition to the ED, units such as general medicine, oncology, cardiology, and obstetrics and gynecology call on consulting psychiatrists to assess patients and provide recommendations for care.

Shah checked in on her two psychiatric patients, including Ellen*, who was lying on a gurney in a treatment bay — one of two in the ED with a retractable metal door installed in the back. Any medical equipment Ellen could use to harm herself was secured behind the door. The overhead lights were dimmed. A patient care assistant sat nearby to monitor her safety and address any immediate needs.

This was Ellen’s second time in the Brigham’s ED in a week. She hoped an inpatient facility could help her recover from addiction and depression so she could get back home to her young son, who was being cared for by her mother. Asked what it’s like for her in this environment, Ellen shook her head: “It’s too much.”

Shah told Ellen they were looking for a bed for her. After 34 hours in the tiny room, Ellen transferred to an inpatient facility.

“The system is so broken,” Shah later said. “We’re grossly under-bedded. Patients can board for days in the ED waiting for an inpatient bed, and Massachusetts is one of the better states. In other states, patients can wait for weeks or months. More often, nothing is available, so they get discharged without their needs being met.”

On any given day in the U.S., thousands of people come to EDs in search of relief from symptoms of mental illness, only to find themselves at the mercy of an overburdened mental health care system.

During the past six years, the number of patients seeking emergency mental health care in the EDs at the Brigham and BWFH increased from 3,500 to 4,600 per year. However, these numbers do not reflect the total number of people who come to the EDs for other issues but ultimately also need mental health care.

“A lot of people arrive with substance use disorder, alcoholism, drug overdose and pain issues as their main concern, who also have overlying psychiatric complaints,” said Michael VanRooyen, MD, MPH, chair of the Department of Emergency Medicine. “The Brigham ED is adept at managing patients’ acute psychiatric complaints, particularly if they’re agitated or potentially violent. When patients require extended care, we try to move them to our inpatient psychiatric facility at the Faulkner campus, which has 24 beds, or to other facilities, but there is a severe shortage of inpatient capacity.”

To better accommodate patients experiencing mental health crises, the Brigham ED is adding a Behavioral Health Care Unit as part of its expansion, expected to be completed by late 2021. The unit will provide a safe, quiet place for vulnerable patients to receive the treatment they urgently need. The staff’s goal is to resolve patients’ symptoms and discharge them or to manage their conditions before transferring them to an inpatient psychiatric facility.

David Silbersweig, MD, chair of the Department of Psychiatry, is one of many people determined to improve care and the ways people access it — and to destigmatize mental illnesses.

“Psychiatric disorders are real medical disorders, and they are ubiquitous,” Silbersweig said. “Every year, one in four people is affected. When you add addictions, it goes way beyond that. And when you add co-morbid medical illness, which most people have by the time they’re older, the rate goes way up again. Every family is affected.”

Silbersweig acknowledged the difficulties of changing the way mental illnesses are understood, diagnosed and treated.

“It’s taken longer than cardiology or other fields because we’re dealing with the most complex functions of the most complex organ that make us who we are as human beings,” he said. “That’s also why these are among the most poignant of disorders: because they affect our individuality, relationships, identity, control of our own mind and behavior, and our subjective experience and emotions.”