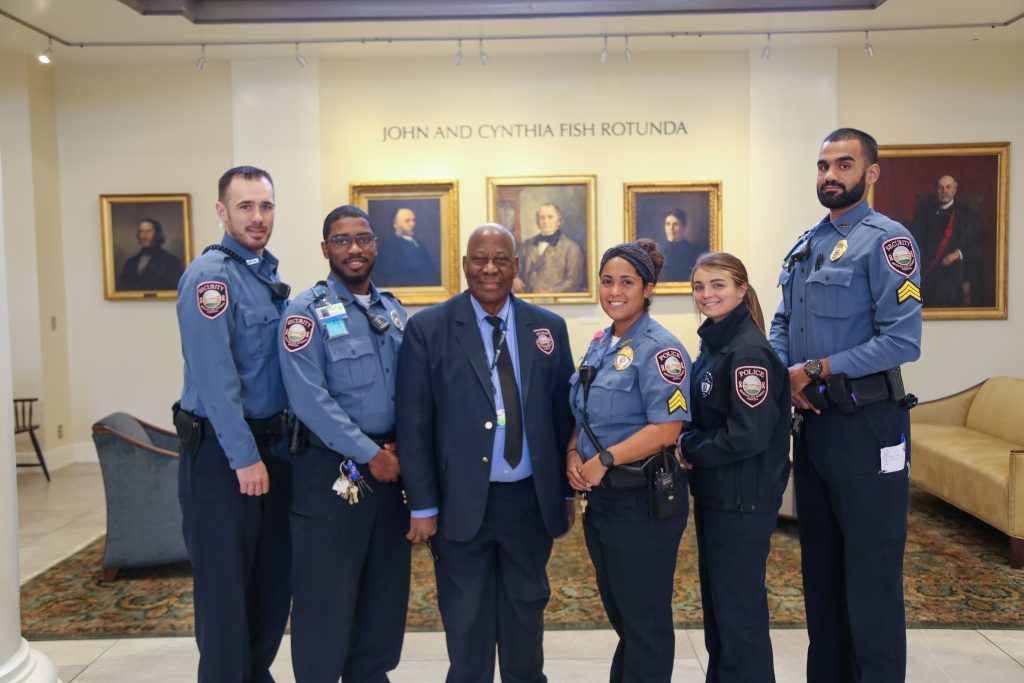 By the time Capt. Kevin Slattery joined the Police and Security team two years ago, he was already well-acquainted with Brigham, although in an entirely different context compared to his role today. More than a decade prior, both his mother, Alice, and his sister, Katherine, were diagnosed with breast cancer and treated at Dana-Farber/Brigham and Women’s Cancer Center.

The experience gave Slattery — who regularly accompanied his loved ones to appointments and exams — a deep appreciation for the Brigham’s world-class care and the exceptional warmth and kindness of those who work here. So, when his Police and Security colleagues recently organized a campaign to raise awareness about and funds for the Brigham’s breast cancer programs and research, Slattery didn’t hesitate to participate.

In doing so, he is among many uniformed personnel in the department who are showing their solidarity for breast cancer patients, families, clinicians and researchers by swapping their standard blue shoulder patches for a pink patch in October, which is recognized as National Breast Cancer Awareness month.

The Brigham effort — spearheaded by Sgt. Samantha Campione, Sabrina Mason and Zachary Pierre — is inspired by the Pink Patch Project, a national campaign that invites public safety agencies across the U.S. to wear a pink uniform patch this month and support breast cancer research. As part of their homegrown initiative, the hospital’s Police and Security organizers worked closely with the Development Office to have their fundraising benefit the Brigham’s Comprehensive Breast Health Center.

By wearing the pink patches, Police and Security staff hope to spark conversations about the Comprehensive Breast Health Center’s services while also inspiring people to contribute to the team’s $4,000 fundraising goal, which will directly support the center’s work. Donors receive a collectible pink patch as a thank-you gift, but donations are not required to obtain a patch; they are freely available to anyone who’s interested, Campione said.

“I thought this would be a great way to show our colleagues that we stand with you,” Campione said. “We’re all working toward the goal of helping people get better. This project shines a bright light on an important issue while demonstrating that we care in more ways than one.”

Dave Corbin, director of Police, Security and Parking, said he is proud to see his team rally around such an inspiring cause.

“Breast cancer has touched almost everyone here, directly or indirectly,” Corbin said. “Our staff have been so passionate about this project since it launched, and their tenaciousness in engaging the community has been amazing to witness.”

Slattery said his family’s experience with breast cancer underscored for him the enormous importance of regular screening. His sister is now in remission — something he credits to her care team’s early detection of the disease and expert treatment. Their mother, who had been diagnosed with an aggressive form of breast cancer, survived for 10 years before passing away last year at age 88; he also attributes her extended prognosis to early detection.

“As someone with a wife, two daughters and four sisters, this issue is so important to me,” said Slattery. “Had it not been for the excellent care my sister received here at the Brigham and Dana-Farber, I don’t think she would be alive today.”

Department staff also highlighted how the initiative has been a rewarding opportunity to connect with colleagues and patients in a different way. “We’re here to serve the Brigham — this is our community,” Campione said. “This is just another way of serving.”

To learn more about obtaining a pink patch, speak with any uniformed Brigham Police and Security officer or concierge on the main or distributed campus, or call 617-732-6565.