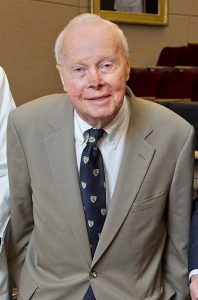 Dr. Mannick, an international pioneer in vascular surgery, a visionary surgical researcher and a dedicated educator, served as surgeon-in-chief at the Brigham and Moseley Professor of Surgery at Harvard Medical School (HMS) from 1976 to 1994. Since then, he remained actively involved in education and research efforts at both institutions.

Throughout his career, Dr. Mannick contributed many successful techniques to the practice of vascular surgery. He provided seminal contributions in transplantation immunology and in understanding the role of the immune system in burns and other forms of acute injury.

For many years, the Department of Surgery has hosted an annual John A. Mannick Research Awards ceremony in his honor. These awards recognize Surgery residents and research fellows for their work in basic science, clinical or outcomes research.

Francis “Chip” Moore Jr., MD, vice chair of Surgery, described Dr. Mannick as a consummate surgeon and chief. Moore began at the Peter Bent Brigham Hospital as a surgical intern in 1976, close to the same day at Dr. Mannick joined the institution. Dr. Mannick was Moore’s teacher for the next 43 years.

“His knowledge of all of surgery was comprehensive and current, even though he was a long-time specialist,” Moore said. “He led by example and with a knowing smile. His sense of humor was hugely appreciated in a group engaged in very serious matters. He also took tremendous pride in his colleagues’ accomplishments, most memorably with the initial heart transplant in Boston and with the development of a robust thoracic surgery service. He was highly organized and cleared his desk every day, never going home with anything more than a seemingly empty briefcase.”

Gerard Doherty, MD, chair of the Department of Surgery and surgeon-in-chief at Brigham Health and Dana-Farber Cancer Institute, described Dr. Mannick as an internationally renowned surgeon and scientist who was widely admired for his leadership and expertise at the Brigham and, prior to his appointment here, Boston University.

“He mentored scores of surgeons from around the country as they built their laboratories and departments. I personally benefited from his insightful comments through the Surgical Biology Club for many years, until our paths finally converged here on Francis Street,” Doherty said. “We will sorely miss both his wit and his grace.”

James Lederer, PhD, associate professor and research immunologist in the Department of Surgery, described Dr. Mannick as a great friend and mentor. “I am sad and will miss him every day I walk into the research lab that I shared with him for many years,” he said.

Dr. Mannick graduated from Harvard College and HMS. After medical school, he served in the Korean War as a U.S. Air Force flight surgeon. He completed his general surgery residency at Massachusetts General Hospital. Among his many accolades was the field’s highest honor: election as president of the American Surgical Association.

Dr. Mannick is survived by his daughters, Catherine, Elizabeth and Joan; and seven grandchildren. He was predeceased by his wife, Virginia.