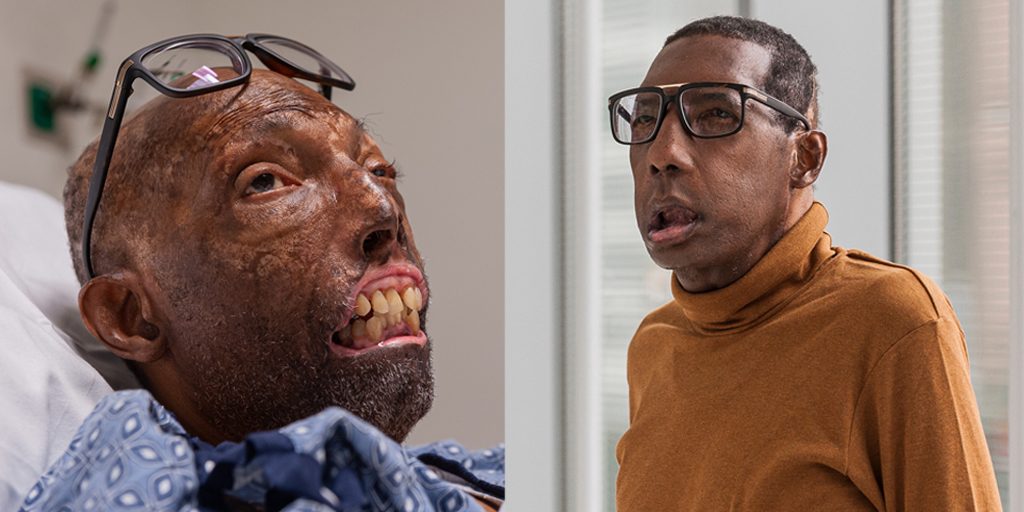 Robert Chelsea, shown before and after undergoing a face transplant at the Brigham.

When Robert Chelsea noticed his car was overheating while driving on a California freeway six years ago, he never could have imagined the life-altering trauma that would occur just moments after he stopped his vehicle on the side of the road.

Chelsea, who had been on his way home from church, was sitting in his car when a drunk driver struck his disabled vehicle. It burst into flames — resulting in a fiery explosion that burned over 60 percent of Chelsea’s body and face. After being rescued by a bystander and rushed to a nearby hospital, Chelsea remained in a coma for six months and hospitalized for a year and a half. During that time, he underwent more than 30 surgeries. His injuries drastically altered his physical function and appearance. His lips, part of his nose and left ear were unable to be reconstructed, and his face was severely scarred.

After learning about face transplantation, Chelsea and his family pursued the option, in the hope that he could qualify for and receive a face transplant. In July, Chelsea, at age 68, became the first black patient, and the oldest, in the U.S. to receive a full face transplant in a procedure performed at the Brigham.

The 16-hour surgery, involving a team of over 45 physicians, nurses, anesthesiologists, residents and research fellows led by Bohdan Pomahac, MD, was the ninth face transplant procedure at the Brigham and the 15th nationwide.

“Despite being the oldest face transplant patient at 68, Robert is progressing and recovering remarkably fast,” said Pomahac, the Roberta and Stephen R. Weiner Distinguished Chair in Surgery and director of Plastic Surgery Transplantation at Brigham Health. “We are looking forward to seeing a significant improvement in Robert’s quality of life.” 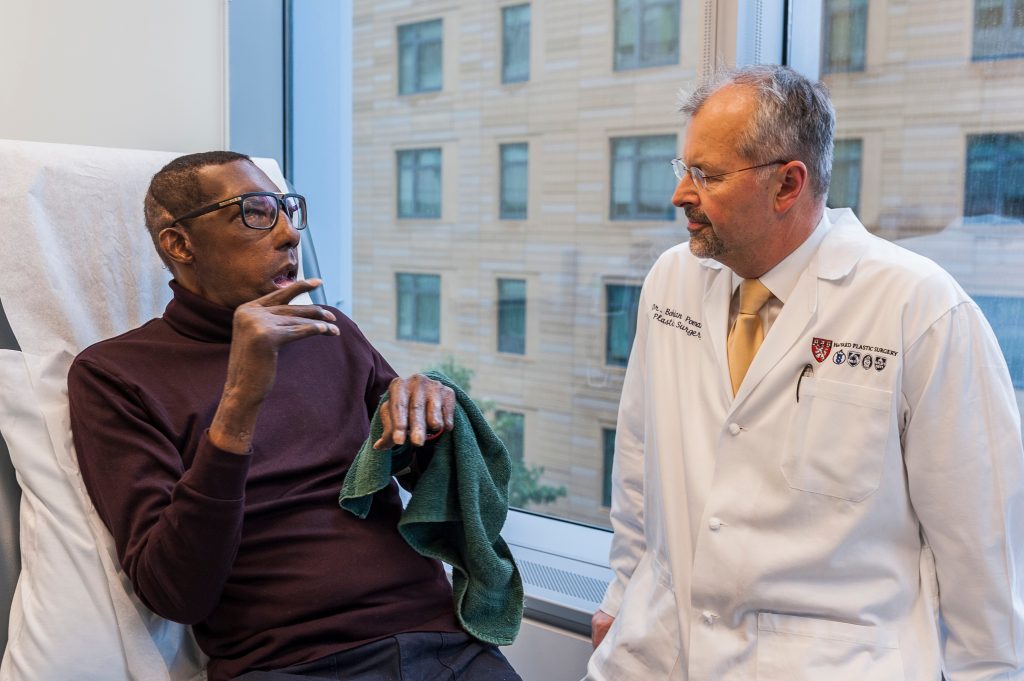 From left: Robert Chelsea speaks with Bohdan Pomahac during a recent follow-up appointment.

After evaluation by Pomahac, and an extensive screening process, Chelsea became eligible for a face transplant in March 2018. His wait for a donor was longer than that of previous Brigham face transplant recipients due to the effort to find a match that would work for Chelsea’s skin tone. This was complicated by the fact that the number of black organ and tissue donors is disproportionately smaller — and range of skin tones much larger — compared to white donors. The gap is caused by several issues, but numerous studies have shown that chief among them is a broad mistrust of the U.S. medical system by many black Americans due to the racism that African-American patients experienced throughout the nation’s history.

“It is vitally important for individuals of all races and ethnicities to consider organ donation, including the donation of external grafts, such as face and hands,” said Alexandra Glazier, president and CEO of New England Donor Services. “Unlike internal organs, the skin tone of the donor may be important to finding a match.”

A follow-up study of face transplant recipient outcomes, recently published in The New England Journal of Medicine, found the Brigham’s first face transplant patients had a robust return of motor and sensory function of their face, as well as functionality, allowing them to socially reintegrate in a way that would not have been possible pre-transplant. These data indicate Chelsea is likely to achieve near normal sensation and about 60 percent restoration of facial motor function within a year, including the ability to eat, smile and speak normally.

“Our previous experience has demonstrated that face transplantation is a viable option for patients with severe disfigurement and limited function who have no alternatives,” said Pomahac. “As we continue to expand this treatment to more patients, we are exploring the ways in which we can quantify how much benefit our patients receive as well as identifying opportunities to limit the risks of this transplant through new immunosuppression protocols.”