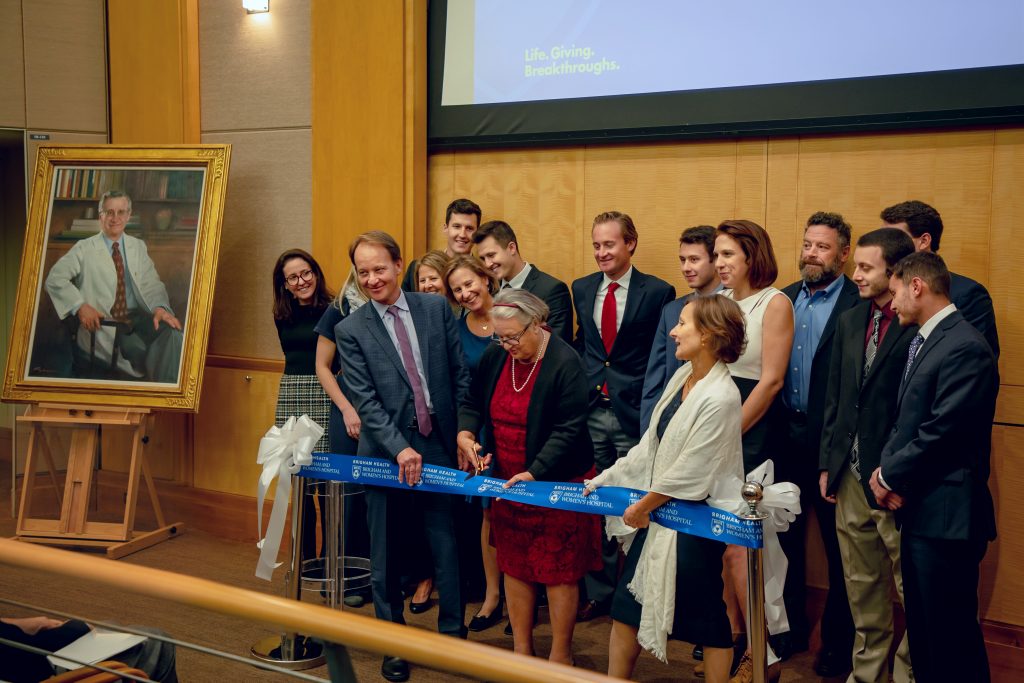 To acknowledge and celebrate the legendary contributions that the late Ramzi S. Cotran, MD, former chair of the Department of Pathology, made to the Brigham and medicine more broadly, the Brigham community came together earlier this week to dedicate the building at 75 Francis St. (formerly the Amory Building) in his honor.

During a symposium and dedication ceremony, held in Bornstein Amphitheater on Oct. 10, family, friends and guests gathered to pay tribute to Dr. Cotran’s legacy.

Brigham Health President Betsy Nabel, MD, described Dr. Cotran as a visionary pathologist, exemplary leader and cherished member of the Brigham community who served as chair of Pathology for 26 years. Dr. Cotran died in 2000 at the age of 67.

“He was a dynamic force in the growth of the hospital, building a world-class research laboratory and transforming the department from a small clinical service to a distinguished academic department known as one of the best pathology training programs in the country,” said Nabel, who had first met Dr. Cotran when she was a trainee at the Brigham. “Dr. Cotran was a world-renowned leader who shaped an era of contemporary pathology. Widely acknowledged as the foremost academic pathologist in the United States, Dr. Cotran could have taken his career anywhere — and we are so very fortunate that he chose the Brigham.”

Born in Haifa, Palestine, Dr. Cotran completed his medical training at the American University of Beirut. He pursued his postgraduate training in pathology at Memorial Sloan-Kettering Cancer Center in New York City and Boston City Hospital’s Mallory Institute as a Harvard Medical School (HMS) faculty member. In 1974, Dr. Cotran was appointed chair of the Department of  Pathology at the Brigham, known then as the Peter Bent Brigham Hospital.

One of Dr. Cotran’s most important contributions to medicine was his teaching. He mentored and served as a role model to many pathologists who are now serving in leadership roles around the world. In recognition of his teaching legacy and impact on the next generation of pathologists, Dr. Cotran received the HMS Lifetime Achievement Award in Mentoring.

He was also the primary author of Robbins Pathologic Basis of Disease, one of the most widely read textbooks in medicine. Dr. Cotran authored more than 180 research papers and served as the president or chair of many national and international professional organizations in pathology and nephrology. A distinguished leader, he was elected as a member of the Institute of Medicine of the National Academy of Sciences and the American Academy of Arts and Sciences.

Attendees also heard remarks from Jeffrey Golden, MD, chair of Brigham Pathology and the Ramzi S. Cotran Professor of Pathology at HMS, who said Dr. Cotran inspired him as a clinician and educator.

“He shaped an era of contemporary pathology with his energetic and unfailing devotion to advancing the field as a premier discipline that ties basic science knowledge to clinical practice,” Golden said. “Respected and admired by clinicians and researchers alike, Cotran provided leadership and mentorship to legions of trainees and colleagues, including me.”

Nabel said the Ramzi Cotran Building — which houses a mix of clinical and administrative space, including many Pathology laboratories and offices and the Endoscopy Center — will stand in Dr. Cotran’s honor as a tribute to his work and extraordinary gifts.

“From this day forward, the Ramzi Cotran Building will be a visible and lasting reminder of Dr. Cotran’s outstanding leadership, legendary mentoring and unsurpassed legacy of caring,” Nabel said.