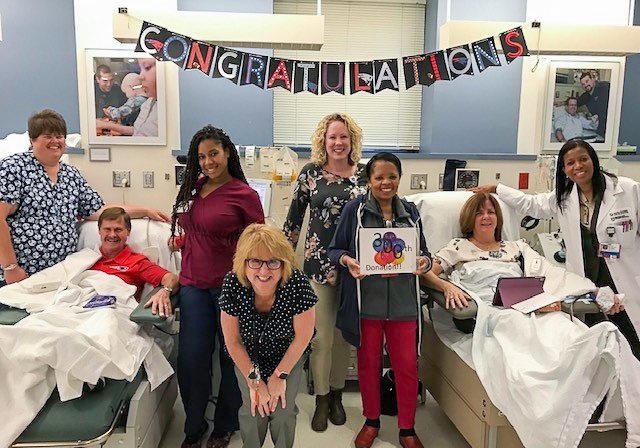 John Ryan (second from left) and his wife, Geri (second from right), celebrate their milestone with Kraft Center staff.

Geri Ryan and her husband, John, knew they wanted to make a difference in the lives of cancer patients after listening to a Jimmy Fund radio telethon and reflecting on how lucky they felt to have two healthy children. So, in August 2005, Geri booked an appointment at the Kraft Family Blood Donor Center, which supplies lifesaving blood and platelets to patients at the Brigham and Dana-Farber Cancer Institute, to donate her platelets to those in need.

Almost 15 years later, the Ryans have jointly fulfilled that commitment hundreds of times over. Earlier this month, Geri and John each celebrated their 300th platelet donation together at the Kraft Center — their efforts collectively amounting to 600 donations.

Platelets act as the body’s bandages, allowing blood to clot and wounds to heal. Cancer patients and other critically ill patients often require transfusions of healthy platelets because their blood does not clot properly. Platelets have a shelf life of just five days, which is why the need for donors is so great. Volunteer donors help ensure there is a sufficient supply for patients in need.

John, who acknowledged he’s somewhat squeamish at the sight of blood, was initially nervous about participating but soon joined his wife in donating platelets. It soon became part of a regular routine for the couple, Geri said. The Ryans return to the Kraft Center every two weeks to donate. Adults can safely donate platelets 24 times over a 365-day period, with at least seven days between each donation.

“This experience has taught us to never sweat the small stuff, and interacting with patients at the Kraft Center reminds us every day why we come back,” Geri said. “We are just blessed and thankful we can help in any way possible.”

To schedule an appointment at the Kraft Family Blood Donor Center (open seven days a week), email BloodDonor@partners.org or call 617-632-3206.