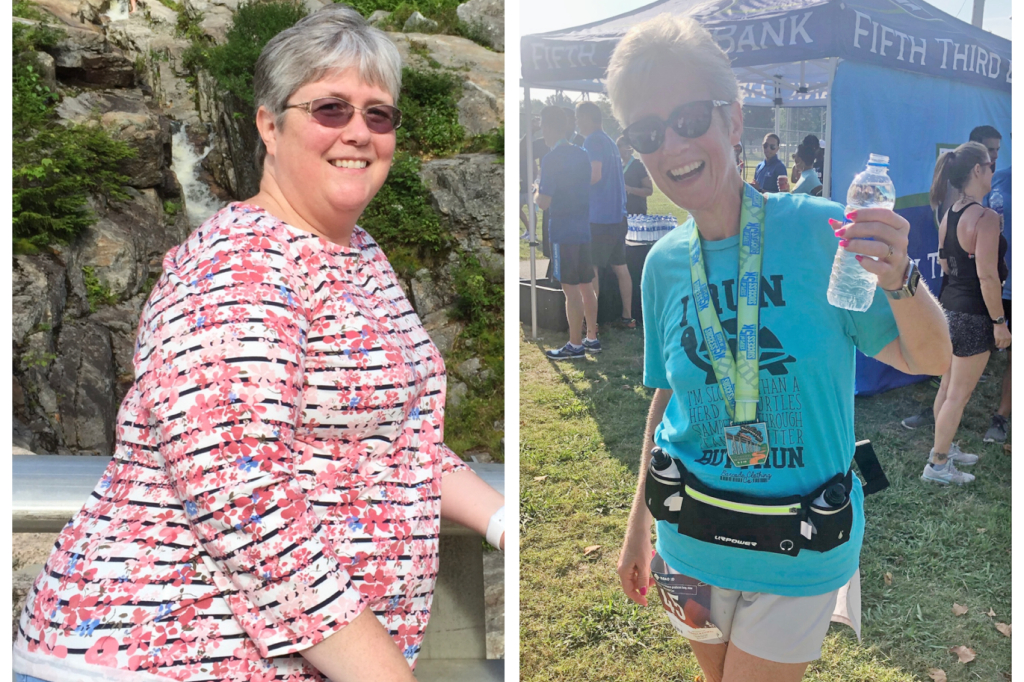 When Karen Bruynell, administrative director of Brigham Education Institute (BEI), sets a goal, she doesn’t stop until it’s achieved. So, when she decided to compete in 5K races in all 50 states, she hit the ground running — literally.

The idea came to her as part of a two-year weight-loss journey. In March 2017, at age 53, Bruynell realized several health issues were hindering her day-to-day activities. She began to change her lifestyle and improve her health, including undergoing bariatric surgery that fall. In January 2018, Bruynell embarked on her personal challenge to run throughout the country.

Since starting her journey and losing a total of 140 pounds, Bruynell, now 55, has competed in Florida, New York, Tennessee, Texas, Virginia and every state in New England. She set a goal to run in at least 10 states each year to complete the map by age 60.

But maintaining a healthy weight is not the only thing that motivates Bruynell to keep going. With every step, she is reminded that each charity race she runs benefits people all over the country.

“It’s great to be indirectly connected to people through a cause. I like the idea of being able to help everyone through donations and raising awareness, even if I only play a small part,” said Bruynell.

Many of the causes have personal connections. Bruynell participated in a charity run for multiple sclerosis research in honor of a colleague living with the disease. She selected a 5K in Arlington, Va., that benefited the maintenance of Mount Vernon — a place Bruynell cherishes because of her love for history. She also completed a race benefiting people with brain injuries in honor of her stepmother, who recently experienced a stroke.

One of the most poignant and touching events was a race she didn’t select for herself.

This past May, Bruynell’s youngest son suggested she take part in “Tracy’s Run,” a race dedicated to supporting individuals with mental health issues, in Gilford, Conn. What he didn’t know then was that Bruynell had lost her best friend, who lived in Gilford, to suicide 14 years ago. She said completing that race was an experience she will always hold close to her heart.

In addition to competing in about four 5Ks a month around the U.S., Bruynell maintains her athletic prowess by remaining active in local running programs, including the Brigham’s, and has participated in the Boston Athletic Association (B.A.A.) 5K and 10K races while fundraising on behalf of the hospital.
“The Brigham Running Program is excellent. The leaders’ enthusiasm is so great and helpful. It makes me consider running a marathon,” said Bruynell.

Cheering her on from not only the sidelines but also, in some cases, alongside her are Bruynell’s BEI colleagues. Anna De Cristofaro, senior administrative coordinator at BEI, said Bruynell inspired her to get back into running after taking a hiatus due to a prior injury. De Cristofaro has completed three races with Bruynell by her side, including one in Florida.

“Karen has been a great encouragement for me to get out there and get active with running again, and she is the sole reason why I pushed myself to start competing in more 5Ks,” said De Cristofaro. “She’s excelled immensely and exudes confidence in every workout she does.”

Looking to the future, Bruynell strives to make additional progress each day. Since embarking on her unexpected running career, Bruynell has improved her per-mile pace by five minutes, and in a recent race placed first in her age category. She plans to push herself to compete in longer races, such as 10Ks and half-marathons, more frequently.

“I am constantly striving to become better, and running presents me with that challenge,” she said. “Since deciding to follow through with my running goal, I feel like my life has just started.”