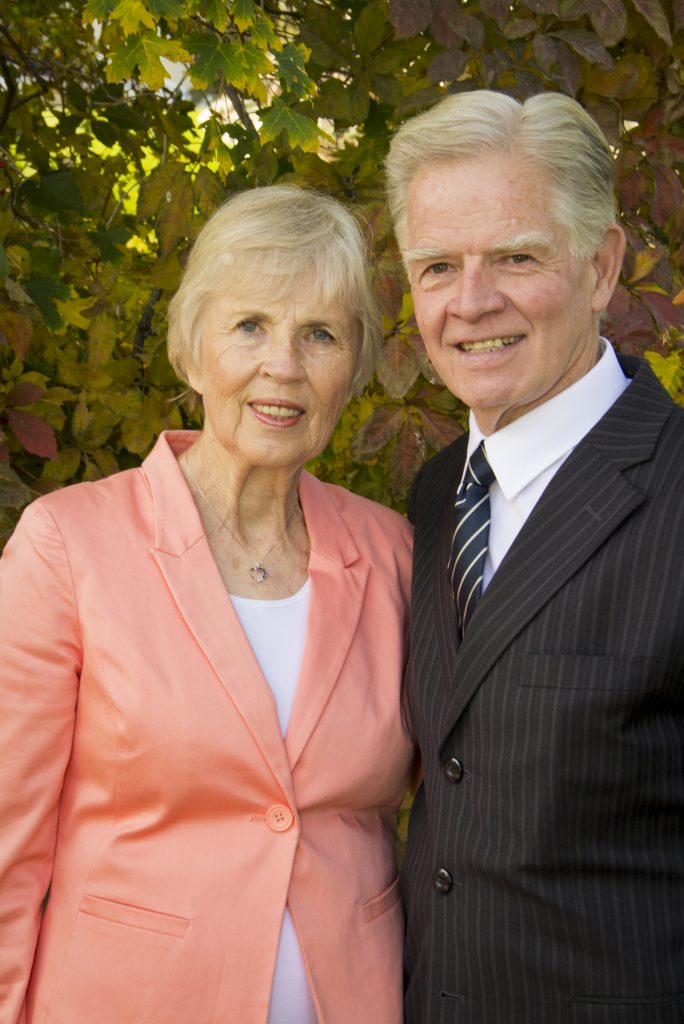 Lois Ence and her husband, Bill

Lois Ence, mother of eight, grandmother of 37 and great-grandmother of nine, faced a difficult decision after her left eye began to tear uncontrollably and the lid began to droop.

An MRI test at the Brigham confirmed what Ence, 76, suspected: For a third time, a tumor was growing in the front of her skull, just behind the forehead, and pressing on the top of her eye.

In 2001 and 2016, doctors removed a noncancerous brain tumor known as a meningioma. Even with successful surgery, some meningiomas may recur. The tumor itself is not deadly, but when it grows in crowded, crucial regions of the skull, it can cause serious health problems.

This time, tests showed a new, grape-sized tumor that likely was pushing on the muscle that holds up the eyelid and on the gland that produces tears, causing her symptoms.

Omar Arnaout, MD, of the Department of Neurosurgery, explained that if the condition was left unchecked, she could lose use of her left eye as the muscle eventually failed to hold up the lid. Alternatively, she could consider surgery to remove the tumor.

After two previous and lengthy brain surgeries, followed by challenging recoveries, Ence was willing to risk her left eye to avoid a third invasive surgery.

Upon carefully studying her case, Arnaout proposed using a new, minimally invasive “keyhole” technique. Working through a small incision in her eyelid, known as a transpalpebral approach, he would be able to remove the tumor — forgoing the need for surgeons to go through the bone in her skull to reach the mass.

Although initially still skeptical about any additional brain surgery, Ence changed her mind after meeting with members of her multidisciplinary care team, which included providers from the Division of Plastic and Reconstructive Surgery, who would partner on the procedure.

She liked how her providers spoke directly and clearly with her about her condition and the benefits of the keyhole approach. Their teamwork and trust in each other were apparent.

“They had my complete confidence after that,” she said.

Each keyhole surgery is unique and custom-designed for the individual patient. Neurosurgery and plastic surgery teams prepare extensively to plan the safest route to the tumor, with minimal scarring and tissue disruption.

Ence’s surgery was performed in early June. The team approached the tumor from below instead of from above, making a small incision in her upper eyelid. Inserted through this “keyhole” opening were instruments used to remove the tumor and affected bone. “We were able to sneak in behind the eyeball to the roof of the skull where our target was,” Arnaout said.

Once Ence’s eyelid healed, the incision was no longer visible within the folds of her eyelid.

“The surgery took half the time than the doctors expected,” Ence said. Afterward, she was alert and well enough to safely avoid a stay in the Neuroscience Intensive Care Unit. After just one night in the hospital post-surgery, Ence returned to her Worcester home.

“The recovery was so easy. I was on my feet the next day,” she said. “I immediately started to do word puzzles to stretch my brain and to go for walks.”

As her eye cleared of excess fluid, she returned to reading. Within weeks, she was back to driving, volunteering and preparing for a late summer trip to California to attend her granddaughter’s wedding, visit Yosemite and spend additional time with her family.

“I’m kind of a miracle,” Ence said. “The stitches blend into my eyelid. I’ve earned my wrinkles. To me, this looks perfect.”