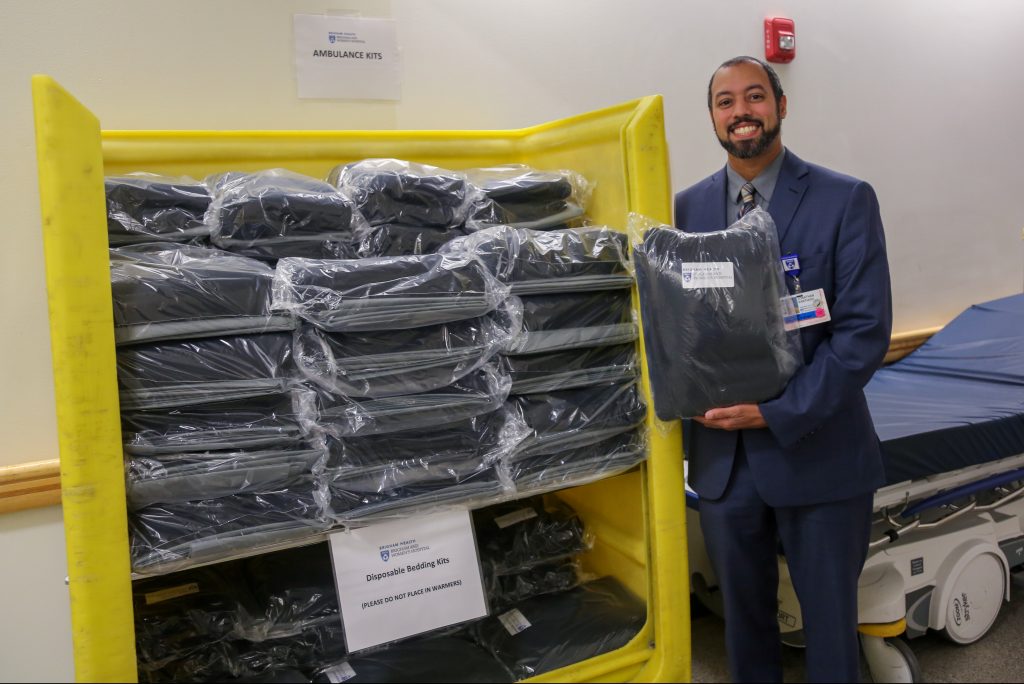 Jonathan Santiago displays one of the disposable bedding kits available to EMS personnel outside the Emergency Department.

As director of Materials Management at the Brigham, Jonathan Santiago spends many days thinking about two kinds of sheets: bedsheets and spreadsheets. They have more in common than you might expect.

That’s because, like many hospitals across the country, the Brigham rents linens — which encompass bedsheets, hospital gowns, pillow cases, scrubs, towels and wash cloths — from an outside vendor, which delivers thousands of clean linens each day and sanitizes used linens off-site. Each item contains a microchip the vendor uses to identify unreturned items. When linens are not returned to the vendor within 60 days, the Brigham is charged for each missing item at a considerably higher rate.

In looking for opportunities to identify cost savings for the institution, Santiago and his team investigated the greatest sources of linen loss. They saw a disproportionately high volume occurred through the Emergency Department (ED), specifically via the ambulance bay. Through a collaboration between Materials Management, the ED, Boston Emergency Medical Services (EMS) and Fallon Ambulance, a multidisciplinary team developed a single-use, disposable bedding kit for EMS personnel that is on track to dramatically reduce lost linens and yield significant savings.

Cutting Costs, but Not Corners

When most patients come to the ED via ambulance, they arrive with the ambulance’s linens, which are ultimately cycled through the hospital’s standard housekeeping procedures. Many hospitals, including the Brigham, provide replacement linens to EMS personnel for their next patient. This informal system traditionally has operated on an expectation of “one-to-one” use.

Several Boston-area hospitals use the same medical linens service, Angelica Corp., so most of the replacement linens EMS personnel retrieve eventually find their way back to the rental company. The Brigham team learned these replacement linens had an elevated loss rate and identified a number of contributing factors, such as an ambulance transferring a patient to a nursing home or another facility that wasn’t contracted with Angelica.

After crunching the numbers, the team determined that it would be more cost-effective to supply EMS personnel with prepackaged, disposable bedding kits — also known as ambulance kits — each containing a heavy-duty sheet and fleece blanket the hospital has purchased with no expectation of return. As of this summer, EMS personnel dropping off a patient at the Brigham’s ED now take a single kit on their way out.

“While some linen loss is always expected, we realized it made sense to move forward with a disposable kit so that we pay this one price and avoid a larger charge in loss fees,” Santiago said.

The kits rolled out sooner than anticipated due to an unexpected, hospital-wide linen shortage. Because their contents come from a separate supply, the kits allow Materials Management to keep more of the standard sheets and blankets within the hospital.

As part of the project, the team also learned EMS personnel usually did not require towels for clinical use and worked with ambulance providers to exclude towels from the kits, while leaving a smaller amount on a nearby cart. In addition to reducing the volume of towels, Materials Management educated ED staff on how to replenish the carts so that older clean towels would be rotated to the top of the pile, minimizing the chance of them missing the 60-day rental deadline. These changes alone netted an additional $9,500 in savings, Santiago said.

Andrew Sants, materials coordinator for the ED, applauded Santiago for his creative approach and for ensuring all stakeholders had an opportunity to contribute to the kits’ design.

“We’re trying to save money, but not cut corners. Everything revolves around providing the best care to our patients,” Sants said. “I really believe this can do a lot of good, and I think it’s a model that other hospitals should follow.”

Brian Luongo, EMT, an emergency medical technician and assistant manager of Partners Hospital Operations for Fallon Ambulance, said that while the kits are a notable change in process for him and his colleagues, they were an innovative, mutually beneficial means of meeting everyone’s needs.
“We were able to come up with a creative solution for both the hospital and EMS to address our linen needs within an easily accessible, self-contained packet,” Luongo said. “It has everything we need right there.”

Scott Goldberg, MD, the Brigham’s EMS director and an emergency physician, reiterated that quality and safety were priorities for everyone involved.

“We wanted to find a solution that EMS providers were comfortable using and that didn’t detract from the patient experience,” Goldberg said. “We’re trying to reduce waste and inefficiency, but it’s important that we provide a high-quality alternative that everyone is happy with.”