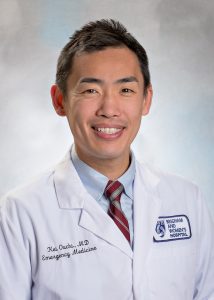 Three-quarters of older adults with a serious illness visit an emergency department during the last six months of their lives. Many will be admitted to the hospital. Some will never leave. But only a minority of patients have a conversation with their physician about preferences for end-of-life care before it is too late in their disease course for their wishes to be expressed.

Identifying patients at greatest risk of near-term death early enough to engage in these conversations could both improve patients’ experiences and drive down health care costs. Brigham investigators have analyzed whether the following question can help emergency clinicians identify older patients at greatest risk of death: “Would you be surprised if this patient died in the next month?”

Researchers found a strong correlation among the emergency clinicians participating in the study at Maine Medical Center — if a physician or physician assistant answered that they would not be surprised, the patient was twice as likely to die in the next month. But they also found low sensitivity, meaning that clinicians underestimated how many patients would actually die in the next month by only capturing a small proportion using the “would you be surprised” question. Despite its low sensitivity, the question may be a valuable tool for helping identify at-risk patients and prompting end-of-life conversations. The findings are published in JAMA Network Open.

“In order to best help our patients nearing the end of life, we need ways to identify patients who should be offered a palliative care consultation or have serious illness conversations as soon as they are admitted,” said corresponding author Kei Ouchi, MD, MPH, a physician in Emergency Medicine at the Brigham. “One of the advantages to the ‘surprise’ question is that it can provoke a conversation about palliative care. If a physician answers, ‘No, it would not surprise me if my patient died,’ the next thought naturally is, ‘What am I going to do about that?’”

Ouchi and colleagues analyzed data from a prospective cohort of nearly 11,000 older adults. Their data included answers from more than 16,000 visits (some patients were seen more than once). Patients were 65 years or older, received care in the Emergency Department and were subsequently admitted to Maine Medical Center from Jan. 1, 2014 to Dec. 31, 2015. Of these patients, 8 percent died in the next month.

Emergency clinicians stated that they “would not be surprised” if the patient died in the next month for 20 percent of the patients. Controlling for age, sex, race, diagnosis and other variables, these patients were 2.4 times as likely to die as those for whom clinicians had said that they would be surprised.

Overall, clinicians were 78 percent accurate in their predictions.

The authors note that their data are from a single, urban academic medical center with a largely white patient population, which may limit the generalizability of the findings. They also note that the study included physicians and physician assistants, and that looking more broadly to include other members of the clinical team, such as nurses, may help to improve the reliability and scalability of the surprise question.

“We need to shift our thinking about end-of-life care,” said Ouchi. “Having earlier conversations with our patients has the potential to change downstream care. Patients who have serious illness conversations experience a 36 percent reduction in the cost of end-of-life care, with an average cost savings of $1,041 in the last week of life. Having tools at our disposal to identify patients at greater risk could allow us to have these conversations sooner and change what end-of-life care looks like in this country.”