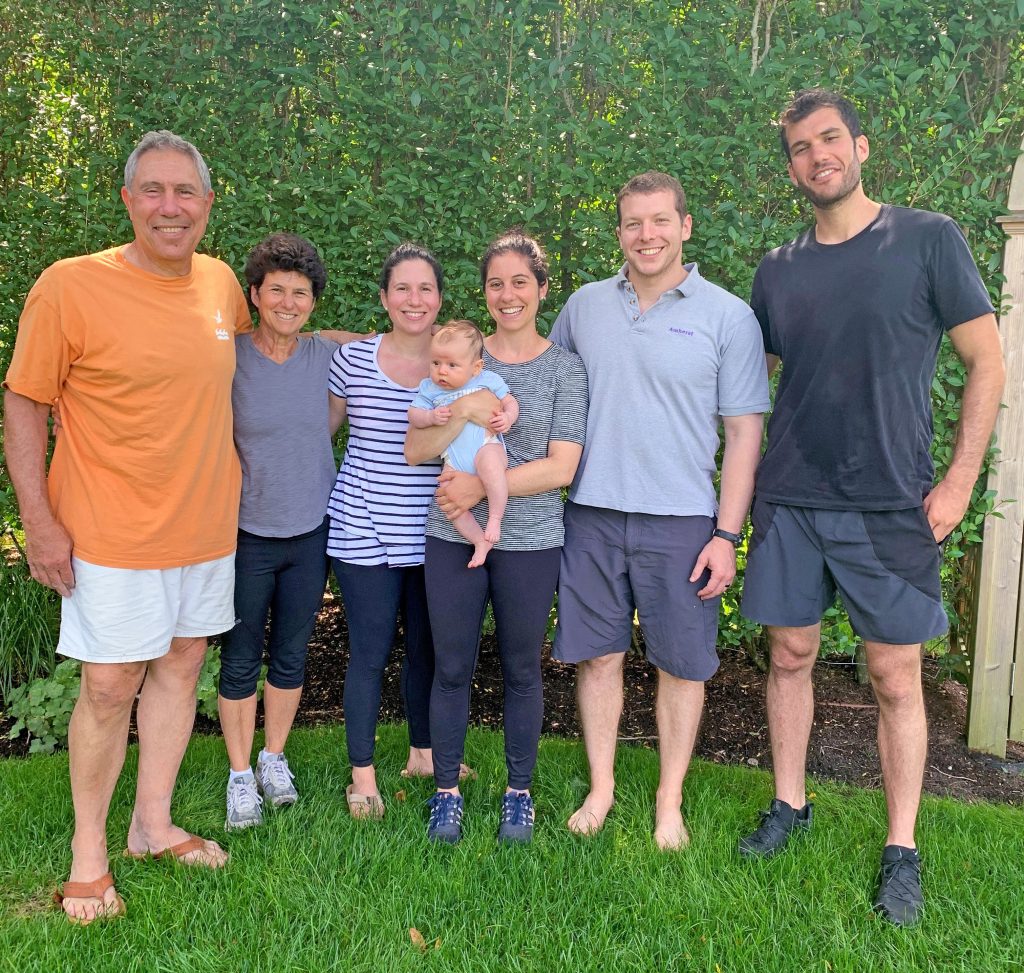 Sharon Conway, LICSW, was 26 weeks pregnant in 1987 when she and her husband, Stephen Conway, MD, saw the meticulously laid-out plans for the next chapter of their lives take an unexpected turn. It also marked the beginning of a heartwarming, multigenerational story in which the Brigham would play a central and recurring role.

At the time, Stephen was completing a neuromuscular fellowship at Lahey Clinic. He had accepted a job in Connecticut, and the young couple began preparing to move to Hartford.

Sharon, then a social worker at Beth Israel Deaconess Medical Center, was approached by a concerned nurse colleague who observed that she looked a bit swollen and offered to take Sharon’s blood pressure. It was dangerously high, and Sharon was quickly admitted at Beth Israel with preeclampsia before being transferred to the Brigham for the advanced care available in its Neonatal Intensive Care Unit (NICU). 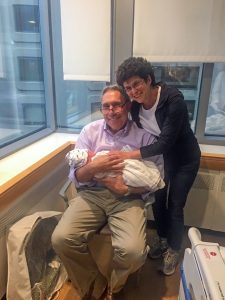 Stephen and Sharon Conway celebrate their granddaughter’s birth at the Brigham.

Despite her uncertain start, Sarah grew and thrived without complications, thanks to the lifesaving care she received in the NICU. Nearly three decades later, she would return to the Brigham — not as a patient but following in her father’s footsteps as a neurologist-in-training in the Harvard BWH-MGH Neurology Residency Program, in which she now serves as a chief resident.

“Who would have ever imagined as we sat anxiously around her isolette in the NICU that she would be back so many years later?” Sharon said. “We had so many worries and fears back then. We couldn’t even dare to dream an outcome like this, but the care that we received at the Brigham was phenomenal. I can’t say enough about how grateful and privileged we feel.”

And just this May, the Conway family added another cherished chapter to their Brigham story when Sarah (now Sarah Conway, MD) and her husband, Adam Kaye, MD, celebrated the birth of their daughter, Sophia, at the hospital.

“How could I not have her here?” said Sarah, who is currently on rotation at Massachusetts General Hospital. “Over the years, my parents imparted on me how thankful they were for the care that I received at the Brigham when I was little, and we’re all so appreciative for the care Sophia and I received more recently. I’m happy to work in medicine and have an opportunity to give back in some way.”

‘Held Our Hands and Our Hearts’

As an infant, Sarah stayed in the Brigham’s NICU for seven weeks, at which point she was healthy enough to be safely transferred to a Connecticut hospital closer to the family’s new home. During their first experience at the Brigham, Sharon and Stephen said the care team’s extraordinary kindness was an immense comfort. 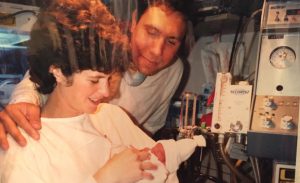 Sharon and Stephen Conway hold their daughter, Sarah, in the NICU for the first time.

“We were particularly attached to Sarah’s primary nurses, who held our hands and our hearts through the whole thing,” Sharon said. “They really gave us the confidence that Sarah was getting what she needed, and they were honest about things that were complicated and potentially scary. I felt like I always had somebody with me.”

Stephen — an alumnus of the Brigham, Beth Israel and Boston Children’s Hospital’s neurology residency program — said his familiarity with the Brigham as a trainee assured him that Sarah would receive world-class medical care. Even so, as an anxious new father, he gained a deeper appreciation for the exceptional compassion and seamless communication their Brigham care team practiced daily.

“Even though I had been to the NICU as a resident, it’s just another world as a patient,” Stephen said. “Everyone made us feel very comfortable, and knowing the hospital as I did, I felt we were in very competent hands.”

Years later, when it came time for Sarah and her husband to apply to residency programs, Sarah said the Brigham-Mass General program was a natural choice for her — not only for its academic excellence but also its connection to the hospital that was so meaningful for her and her family.

“Match Day was one of the most exciting days of my life,” said Sarah, who will continue her training at the Brigham next July as a neurology fellow. “When I opened the envelope and saw the Brigham-MGH program inside, I burst into tears.”

For her loved ones, it’s heartening to know that Sarah is still being cared for at the Brigham, albeit in a different way.

“She’s had the opportunity to get the most incredible and sophisticated medical training from the best of the best, and we felt that she and Sophia got the highest-quality care possible when our granddaughter was born,” Sharon said. “We are indebted to those who provided her with a miraculous start.”

Home | About the NICU