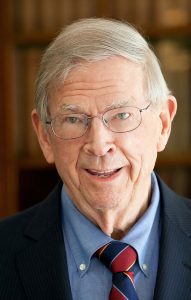 Brigham and Women’s Hospital mourns the loss of John H. McArthur, MBA, DBA, former chair of the Brigham’s Board of Trustees and founding co-chair of Partners HealthCare, who passed away Aug. 20. He was 85.

Mr. McArthur served as a Brigham board member for 35 years, from 1981 to 2016, and as chair of the board for seven years, from 1987 to 1994. Remembered as a visionary, he worked with the Brigham’s first president, the late H. Richard (Dick) Nesson, MD, and Eugene Braunwald, MD, then-chair of the Department of Medicine, to orchestrate the creation of Partners in 1994. His leadership in bringing together the Brigham and Massachusetts General Hospital to anchor a new, integrated system signaled a landmark change in the landscape of health care in Massachusetts.

“John was, and has remained, one of a very small group of individuals whose personal commitment and courageous, visionary leadership truly shaped the Brigham we all cherish today,” wrote Brigham Health President Betsy Nabel, MD, and Executive Vice President and Chief Operating Officer Ron M. Walls, MD, in a message to hospital faculty and staff. “His belief that the two organizations would be stronger together allowed for the creation of a system that instantly was positioned at the forefront of expert clinical care, pioneering research and superior education — distinctions that continue to characterize us to this day.”

Mr. McArthur, who also served as dean at Harvard Business School (HBS) from 1980 to 1995, was steadfast in his commitment to ensuring that future leaders were ethically motivated and exemplary corporate citizens. He collaborated with hospital leaders to establish a first-of-its kind model with the John McArthur Program for Medicine Leadership, which enables Brigham internal medicine residents to earn their master’s in business administration at HBS during residency training. Fourteen residents have completed the program.

Mr. McArthur is survived by his wife, Natty; his daughters, Susan and Jocelyn; and many other family members, friends and loved ones.