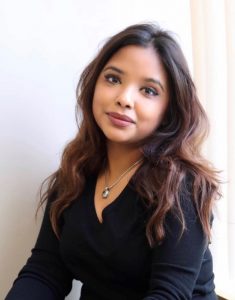 Five years ago, Sumaira Ahmed noticed a small black circle partially obstructing vision in her right eye. It expanded over the next two days, and soon she was unable to see out of that eye at all.

The development caught her off guard; Ahmed was in her mid-20s and otherwise healthy. But her loss of vision quickly escalated. One day at work at a previous job, she walked into a wall she hadn’t seen and collapsed.

“I got rushed to the hospital. I couldn’t really feel my hands, and I was experiencing burning and tingling sensations in my feet,” recalled Ahmed, who now serves as director of Strategic Marketing and Business Development at the Neil and Elise Wallace STRATUS Center for Medical Simulation.

After a battery of tests, Ahmed was diagnosed with neuromyelitis optica (NMO), a rare autoimmune disease that creates inflammation throughout the central nervous system — causing the immune system to misidentify healthy cells in the optic nerve and spinal cord as foreign invaders. NMO patients can experience vision loss, eye pain, paralysis of the arms and legs, and bladder or bowel incontinence, among other symptoms. Its cause is unknown, and it has no cure. For patients with severe forms of the disease, it can be fatal.

Despite the challenges of living with a chronic illness — which include receiving over 200 chemotherapy infusions since her diagnosis and undergoing surgery every six months to assist with the disease’s peripheral symptoms and side effects of treatment — Ahmed has kept a positive outlook. Since the beginning, she has believed there was a greater purpose behind her diagnosis.

It didn’t take long for her to find that direction. Two months after being diagnosed, she established The Sumaira Foundation for NMO.

Growing from a two-person operation to a 28-person, volunteer-based nonprofit, The Sumaira Foundation for NMO aspires to raise awareness of NMO and build a global community for patients and caregivers. The organization also fundraises to advance NMO-related research through two grant programs: the Spark Grant and Joannie’s Unicorn Grant, a pediatric-specific award named in memory of Joannie Rios, a 6-year-old NMO patient who died earlier this year. In June, Tanuja Chitnis, MD, of the Department of Neurology, was named the inaugural recipient of the Joannie’s Unicorn Grant, which will support her study evaluating the effects of NMO treatments in pediatric patients.

On a personal level, Ahmed hopes to inspire positivity among patients and their loved ones. The foundation’s social media presence and website are purposefully adorned with bright colors and cheery graphics, which frame its mission statement of “illuminating the darkness” around NMO.

“I want everything we put out there and everything we do to pick these people up and make their lights brighter and their smiles bigger,” Ahmed said. “There is a lot of heart in our organization. We genuinely just want to help.”

To keep the conversation going, Ahmed developed a multimedia platform called “Voices of NMO,” which enables people affected by the disease — including patients, caregivers and clinicians — to chronicle their experiences. In addition to raising visibility and providing an outlet for those who feel isolated, Ahmed hopes the project will help scientists and clinicians recognize new patterns related to the disease and possible therapeutic targets.

To date, the platform has shared more than 60 stories. Some include patients who were misdiagnosed with multiple sclerosis (MS), which manifests in similar ways to NMO but is a much different condition. Common treatments for MS can be detrimental to NMO patients, something Ahmed believes is crucial to increase awareness of within the medical community.

“I want the foundation to be a pillar of hope and support for patients, showing that there is a light at the end of this tunnel,” Ahmed said. “I hope that our work eventually leads to a cure so that people don’t have to live in darkness.”

‘A Place Where You Belong’

In her work at the STRATUS Center, Ahmed says she is inspired every day by people who share her personal vision: to save lives.

“I have been able to apply a lot of what I learned at the Brigham to the foundation, and things are just flourishing because I’m fortunate to have both of them in my life,” she said.

Meanwhile, Ahmed’s colleagues at STRATUS are equally moved by her commitment.

“Sumaira is creative, bright, savvy and warm. She is one of the major reasons for STRATUS’ success,” said Charles Pozner, MD, executive director of the STRATUS Center.

Looking to the future, Ahmed hopes to one day open a physical center in Boston targeted to the medical and community needs of NMO patients.

“As a patient, you have no idea why this happened to you, and it’s hard to connect with other people,” she said. “I think building a brick and mortar that signifies a safe place of belonging, togetherness, understanding and hope would be a dream come true, especially at a place like the Brigham.”