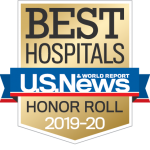 Brigham and Women’s Hospital rose to No. 13 on the 2019 U.S. News & World Report’s ranking of Best Hospitals, up from No. 20 in last year’s annual Honor Roll. The Honor Roll is a distinction awarded to 20 hospitals that deliver exceptional treatment across multiple areas of care.

In addition, many specialties improved significantly over last year and earned top spots, with five specialties at the Brigham landing in the top 10. The Brigham ranks fifth for cancer; fifth for gynecology; fifth for rheumatology; eighth for nephrology and ninth for cardiology and heart surgery.

“Beyond this outstanding recognition, for which we are so grateful, what matters most is the hope and compassionate service we bring to others each day,” wrote Nabel and Walls. “Thank you for all that you do to help us advance our vision of creating a healthier world.”

The annual rankings are based on a point system derived from a comprehensive, nationwide evaluation of nearly 5,000 hospitals in 16 adult specialties. Points are awarded based on institutions meeting certain criteria, and then are ranked according to the number of points earned. The Brigham was bolstered this year by achieving Magnet designation in 2018 — an honor representing the gold standard of nursing excellence and recognizing the highest quality of care hospital-wide.

Across Partners HealthCare, the Brigham’s sister institutions were also recognized with top honors, including Massachusetts General Hospital, which ranked second on the Honor Roll.

Massachusetts Eye and Ear, McLean Hospital and Spaulding Rehabilitation Hospital were also recognized for national excellence. Mass. Eye and Ear ranked second for ear, nose and throat care and fourth for ophthalmology. McLean Hospital was ranked second in the nation for psychiatry, and Spaulding Rehabilitation was ranked third for rehabilitation. U.S. News also makes regional hospital rankings to complement its national rankings. Newton-Wellesley Hospital ranked No. 5 in the region and was recognized as high-performing in geriatrics and pulmonary, while North Shore Medical Center was recognized as high performing in heart failure chronic obstructive pulmonary disease.

The complete listing of America’s Best Hospitals can be found online and will be published in the magazine’s August issue as part of its 2019–2020 Best Hospitals Guide. 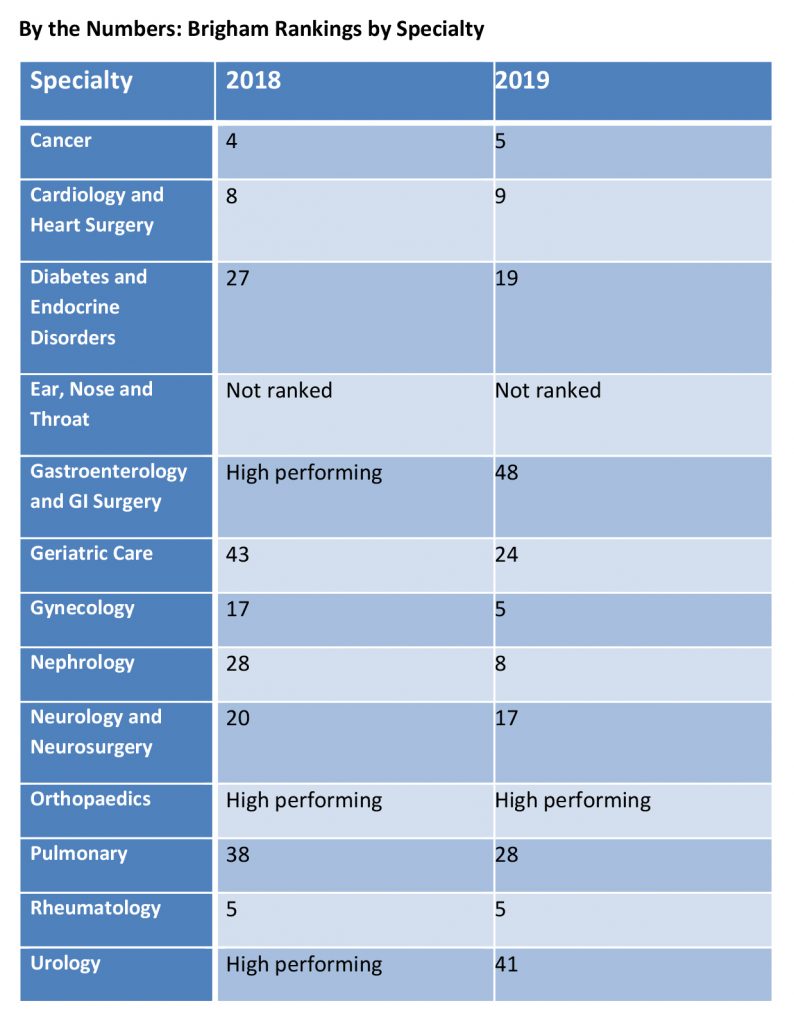