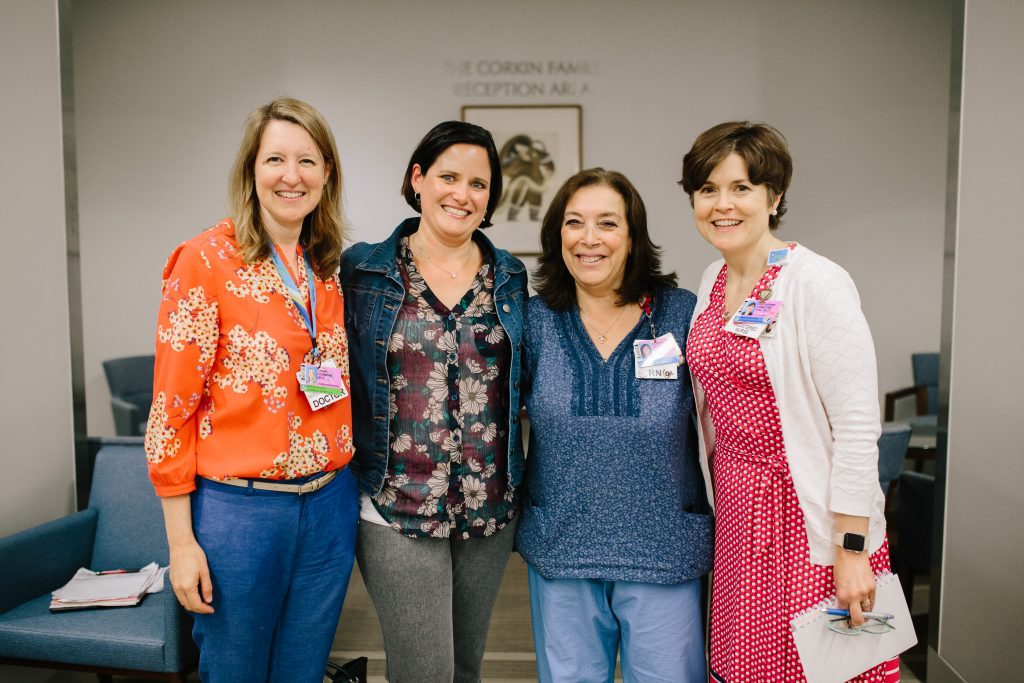 In the four decades since Karen Cashman was a patient in the Neonatal Intensive Care Unit (NICU) at the Boston Lying-In Hospital, one of the Brigham’s predecessor institutions, much has changed. Most visibly, the environment of care for premature and sick infants is now the Mary Horrigan Connors Center for Women and Newborns (CWN). Yet, as Cashman was heartened to see during a recent visit to the Brigham, the exceptional warmth and compassion of those caring for the babies has remained the same.

To celebrate her upcoming 40th birthday and honor her beginnings, Cashman returned to the Brigham last month to mark a lifetime of gratitude for the excellent care she received for three months following her premature birth. She said coming back was an unforgettable experience and one made especially memorable when she reconnected with a Brigham nurse, Corinne Cyr-Pryor, RNC, MSN, IBCLC, who had cared for her at the Lying-In so long ago.

“This visit provided me with the gift to not only celebrate how far I’ve come but also to recognize and thank the providers who invest so much of themselves in the care of the Brigham’s tiniest patients,” said Cashman, who lives in Maine with her husband and two daughters.

Cashman said it was an honor to meet with Cyr-Pryor, who continues to work in the NICU as a staff nurse and lactation consultant, and express her appreciation for her commitment to patients and their families. For Cyr-Pryor, seeing former patients like Cashman thrive and live happy, healthy lives is what has kept her working in the NICU for so many years.

“Babies are awesome, and the proof was in the wonderful woman, Karen, standing before us that day,” Cyr-Pryor said. “Helping these tiny patients and their families is a passion and a privilege.”

Cashman learned about the evolution of the NICU and advancements in care that have taken place there throughout the years, including the installation of the first NICU-dedicated MRI in the country in 2018 and the recent NICU renovation and expansion.

Reflecting on her visit, Cashman said everyone she met welcomed her and made her feel she has always been a part of the Brigham family.

“Forty years ago, the Brigham made my family feel reassured, like we were in good hands, and that we had the best care on our side,” she said. “I believe no matter if you had a healthy start, have met great adversity or are somewhere in between, it’s beneficial to pause and reflect on your life, celebrate who you have become and acknowledge those who’ve helped to get you where you are today.”

As an infant and throughout childhood, Cashman and her mother participated in Harvard Medical School studies. Cashman was surprised to find out much later in life from her mother that her baby teeth did not go to the “tooth fairy” but to research. Today, her family still believes in the importance of improving care through discoveries.

“While I know I am just one of many babies who contributed to the advancement of care, it’s amazing that somehow my contribution helped with the progress of medicine, in particular premature births,” Cashman said. “I like to think what I was a part of at the time helped to create a more promising world. I believe my care, possibly my life, could have been much different if I did not end up at the Brigham.”

Her experiences as a patient also inspired her to pursue a career in the health care industry, most recently as public relations director for Northern Light Health, an integrated health care system in Maine. Through her job, she enjoys paying her gratitude forward.

“I use my love of words and communication to uplift others and help them find hope and reassurance when they may need it most,” she said. “Having a career in health care is an important piece of who I have become.”