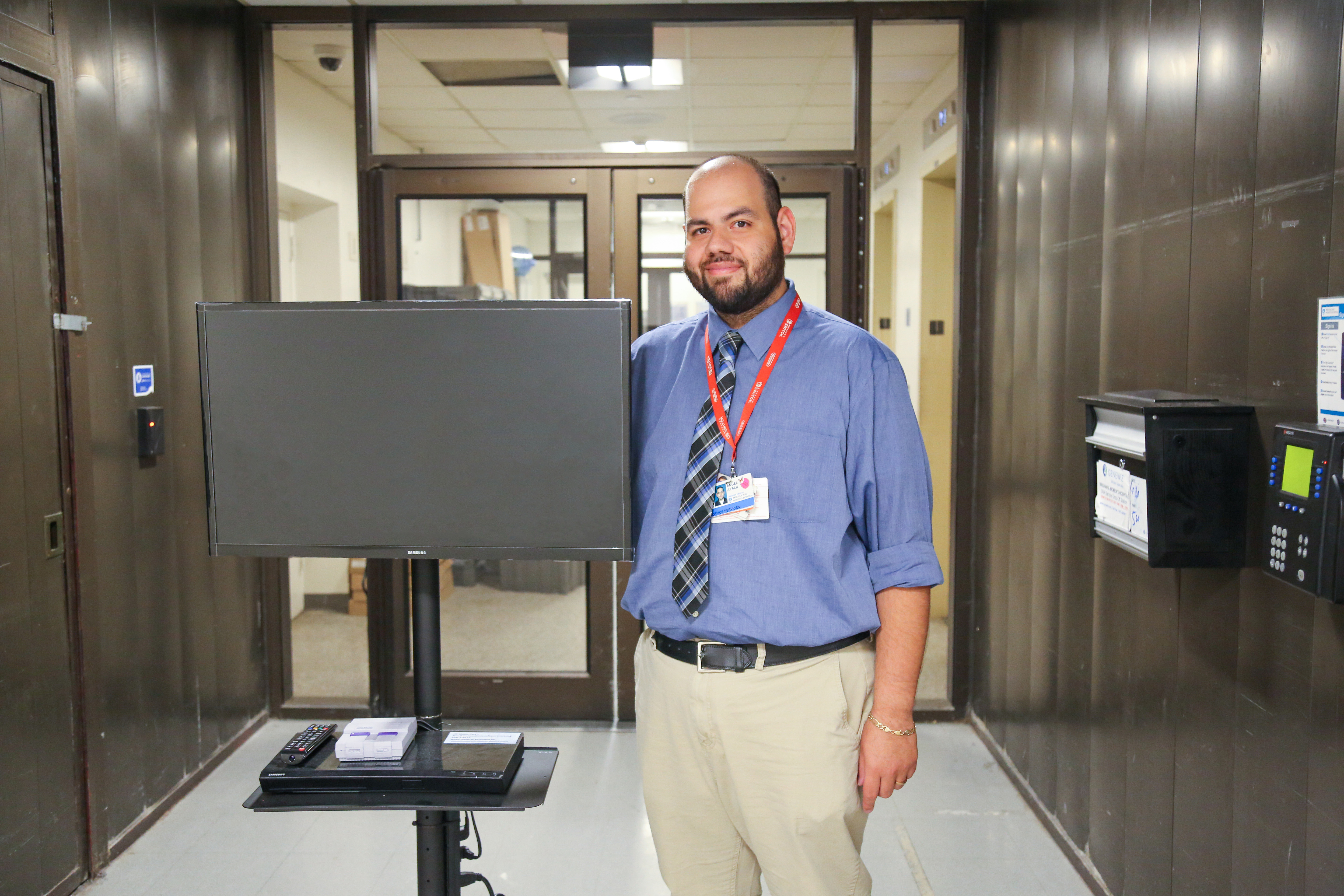 Angel Ayala displays one of the new media carts.

When a Brigham patient realized being hospitalized meant she wouldn’t be able to watch the Game of Thrones series finale in May, she was disappointed. But thanks to the compassion and creativity of the Brigham’s Audiovisual Services team, she was able to see who ended up ruling the fictional world of Westeros, after all.

Angel Ayala, a senior Office Services technician, provided the patient with a custom-made media cart — equipped with a 32-inch smart TV, Wi-Fi capability, a Blu-ray player, USB ports and a retro Super Nintendo game console — that he had recently designed and assembled. Patients can borrow one of the four carts upon request during their stay.

Ayala created the carts to provide an entertainment option that offers some of the digital comforts of home, such as streaming video services. The inspiration to create the media carts came from Ayala’s observations as a member of the Audiovisual Services team and from his personal experience as a patient at the Brigham. While there are TVs installed in patient rooms at the hospital, they have limited capabilities.

“The carts help to bring a little joy to patients while they are staying at the Brigham and makes their time here a little easier,” Ayala said. “Whether they’re having a bad day, recently received some difficult news or just need some time to unwind, patients can use the cart to watch a favorite show or view something on YouTube, for example.”

Following the initial idea, Ayala began researching parts and devices for the carts that could work within the space limitations of patient rooms and be easily maneuvered so as not to block medical equipment. He contacted other departments, including Patient and Family Relations, to share his idea and see how they could help deliver the carts to patient rooms.

The first media cart was ready for patient use just a few weeks after Ayala started working on the project in April.

Requesting to use one of the media carts is easy. Patients and their families, as well as faculty and staff, can contact Patient and Family Relations or the Audiovisual team directly. Ayala or one of his team members will deliver the cart and walk the patient or family member through its components.

Ayala also worked with the Department of Biomedical Engineering and Central Transport to equip the carts with tracking devices so that Ayala and his team can monitor their real-time location and coordinate pickup and return. The team also collaborates with Infection Control to ensure the carts are sanitized before and after each use.

“Most departments under Materials Management don’t usually have direct interactions with patients, so the AV team taking this opportunity to build the media carts is such a great gesture — helping our patients and their family members feel more comfortable during their stay here at the Brigham,” said Jonathan Santiago, director of Materials Management.

A fifth media cart is in the works thanks to a donation from Red Thread, a vendor that works with the Brigham to design and equip workspaces.

Lisa Lauritzen, RN, noticed firsthand how the media carts made a difference for one of her patients.

“It was an opportunity for my patient to keep his mind active and enjoy a fun activity,” said Lauritzen, a nurse in the Orthopaedic Surgery unit on CWN 7. “It made me feel like, for that one brief moment in time, I made a difference in this patient’s day.”

While Ayala had originally envisioned his project as a tool to help patients pass the time in a hospital bed, he quickly realized that the carts had other uses, too. One of the first requests for the media carts came from a patient approaching end of life who wanted to use the screen to display family photos and videos. Using USB ports installed on the cart, family members were able to connect their phones and enjoy the heartwarming images during an otherwise difficult time.

“It felt nice knowing that the media cart was helping them share memories with each other,” he said.

Ayala is also considering adding some other updates to the carts, such as a mini-computer and a streaming media device — all aimed at continuing to improve the patient experience.

“This is exactly the kind of work that Angel is best at: developing ideas, inspiring others to join in the work and building on the interest and feedback generated from such exciting projects, all of which, in turn, lead to future ideas,” Linck said.

For more information about the media carts and how to reserve them, contact Patient and Family Relations at 617-732-6636 or Audiovisual Services at bwhaudiovisual@partners.org or 617-732-8627.