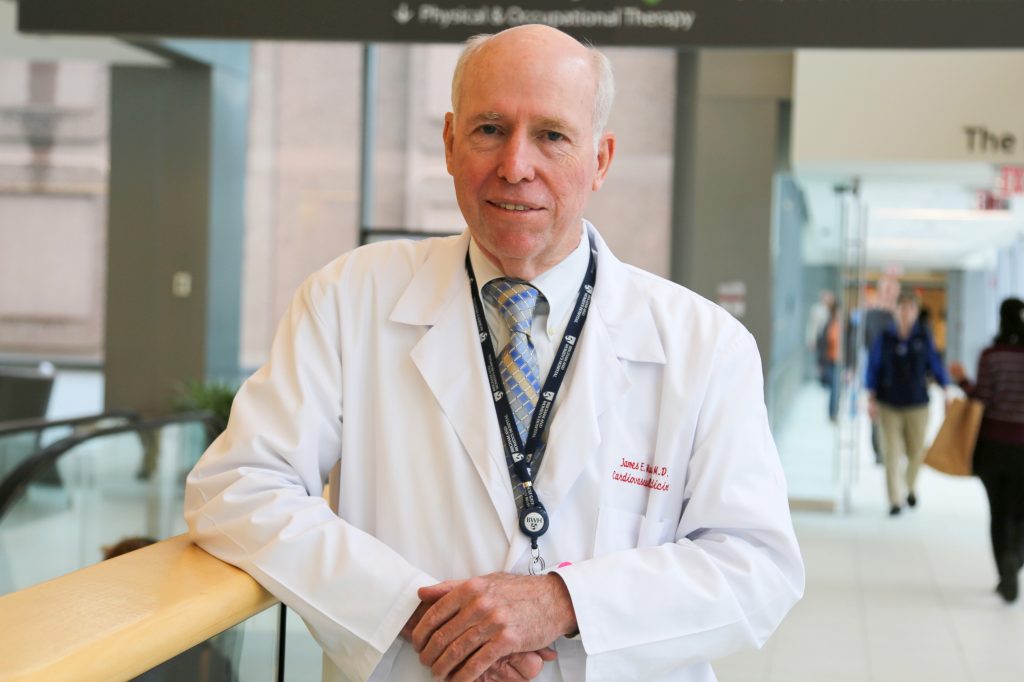 As a teenager growing up in Indiana, James Muller, MD, was impressed by the Soviet Union’s 1957 launch of Sputnik, the world’s first artificial satellite. The event inspired him to study the Russian language and subsequently spend six months in the Soviet Union during medical school — decisions that would shape his career as a cardiologist and advocate for reduction of the risk of nuclear war.

As the Cold War intensified, so did Muller’s awareness of the threat of nuclear war. He went to work with the U.S. Public Health Service, where he helped draft agreements between President Richard Nixon and Leonid Brezhnev, leader of the Soviet Union, that increased cooperation between the two countries on heart disease, cancer and other medical problems. In 1973, Muller left the Public Health Service to work for Eugene Braunwald, MD, then-chair of the Brigham’s Department of Medicine.

U.S.-Soviet health cooperation led Bernard Lown, MD, a renowned Brigham cardiologist, and Muller to the concept that Russian and American physicians could jointly and publicly oppose the nuclear arms race. In 1980, this idea spurred their co-founding of the International Physicians for the Prevention of Nuclear War (IPPNW) with Herbert Abrams, MD, then-chair of the Brigham’s Department of Radiology, and Eric Chivian, MD, of the Massachusetts Institute of Technology. The organization is a nonpartisan federation of doctors, medical students, other health care professionals and concerned citizens who share the common goal of a world free from the nuclear threat. The group was awarded the Nobel Peace Prize in 1985.

In this Q&A, originally published in Brigham Clinical and Research News, learn more about why Muller sees nuclear war as humanity’s greatest health threat, how it intersects with cardiology and how he hopes to help the next generation of activists.

Q: How did you become invested in this issue?

JM: The turning point for me occurred in medical school, prior to going to Russia during a lecture by Dr. Jerome Frank. He said that human aggression plus nuclear weapons could lead to annihilation of all of us. Later in Moscow, I saw nukes paraded through Red Square that I knew were aimed at the U.S. I also knew that about a hundred American nuclear weapons were aimed in my direction. I decided to devote part of my life to trying to build bridges with Russia to decrease the threat of nuclear war.

After the award of the Nobel Peace Prize to IPPNW, the Nuclear Freeze movement and the fall of the Soviet Union, nukes decreased from over 60,000 to about 15,000 today which is an improvement. However, the weapons have spread to nine countries and terrorism has increased. The computer systems that control them are very complex, and the weapons are on high alert. President Trump can launch over 300 nuclear weapons in 10 minutes without consulting anyone. Kim Jong-un has threatened to hit California and Washington.

The devastating effects of nuclear war are not talked about because they are difficult to imagine. But you cannot prevent something you cannot imagine. Part of the medical work is to help people conceptualize the effect of a nuclear bomb on a city: millions killed and injured in an instant.

Q: Why should the nuclear threat be regarded as a health concern?

JM: It’s a permanent obligation of the medical profession to inform the public of threats to life and health. We frequently work against health threats like cigarette smoking that have hidden, devastating consequences. If you take that up a great scale, you have nuclear war. It’s the ultimate medical issue. The continuation of civilization on Earth depends upon solving the nuclear problem.

Q: You recently published a paper in Circulation about why cardiologists are well-positioned to speak out on this issue. Can you talk more about that?

JM: Cardiologists are particularly well-suited to work on the nuclear threat because we spend our days working to prevent cardiac events that are infrequent but catastrophic. Nuclear war is the extreme of that. Fortunately, it’s a low-probability event, but it’s not zero probability and therefore is almost certain to occur if the risk is prolonged.

Q: Can you talk more about the Brigham’s connection to this work? 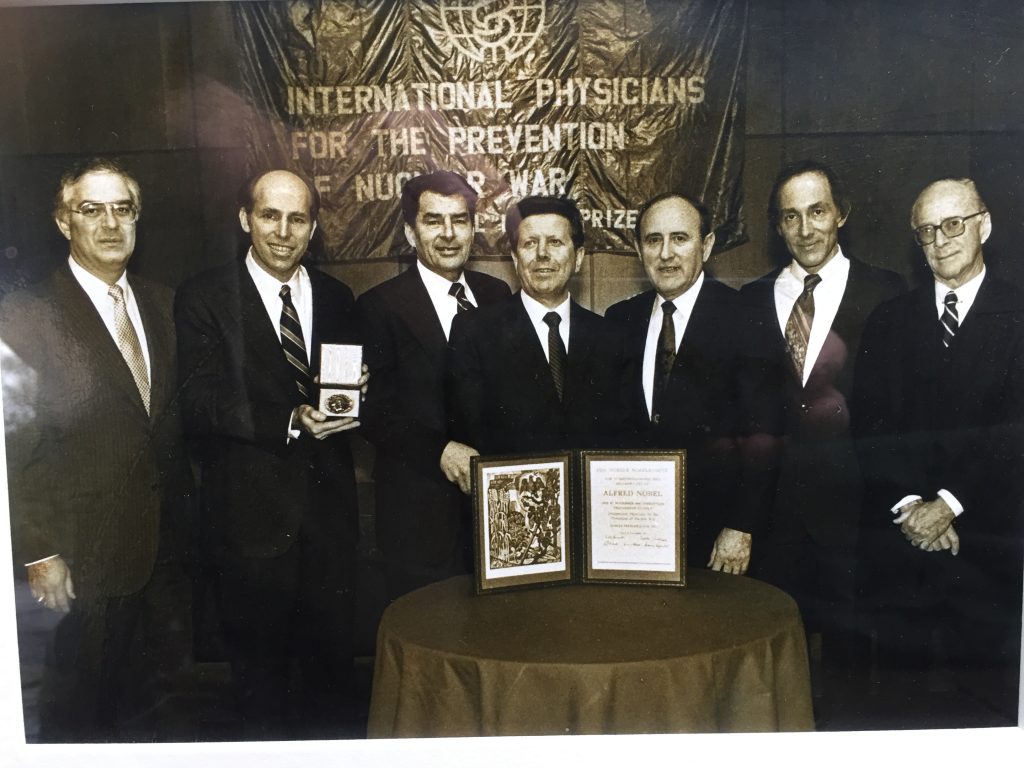 JM: The Brigham is a place that fosters a certain boldness about attacking big problems in medicine and even extending boundaries of medicine. That Brigham spirit helped us do what we did. The work was strongly supported by my mentor, Dr. Eugene Braunwald, for whom the Braunwald Tower is named, and three of the four American co-founders of the IPPNW came from the Brigham.I think it’s our obligation to pass on what we learned about dealing with the nuclear threat to the next generation, and there are some young people working on this topic at the Brigham.

Dr. Joe Hodgkin, a resident, is very active with Back from the Brink, e-step program to reduce the nuclear threat. Noy Kaufmann, a research trainee in Cardiology, and I are working on writing an intergenerational dialogue about the nuclear threat; she grew up in Israel during the Israeli-Lebanese war, which has led her to work to prevent the ultimate war.

Q: Do you see the nuclear threat ever going away?

JM:  We had the Russian-American arms race in the ’50s, the Cuban Missile Crisis in ’62 and the Cold War in the ’80s. Now we have the North Korean-U.S. crisis. The problem keeps resurfacing. Unfortunately, the real difficulty is it will continue to return because human aggression and the knowledge of how to produce nuclear weapons are permanent. Every new generation will have to learn how to manage the threat of nuclear war.

Nuclear war is a terrible and frightening prospect. But that leads to me to this question: How frightened do we have to be to take the massive steps necessary for survival? Will we be able to come to the brink of disaster, as we did with the Cuban Missile Crisis, and back off? Or will we come close to disaster and then the computer systems controlling these weapons will leave no room for human judgement to prevail? It takes a bit of looking into the darkness in order to see the light.

A Televised Plea for Peace

In 1982, Brigham cardiologists Bernard Lown, MD, and James Muller, MD, participated in a Soviet television broadcast with their Russian colleagues from the International Physicians for the Prevention of Nuclear War. The U.S. and Russian physicians described the great humanitarian disaster that would result from a nuclear attack on either country. It was a highly unusual time for Americans to be on Soviet TV, as it was an especially tense period in geopolitics, but their plea reached millions worldwide. Muller, who delivers an address in Russian toward the end of the taping, says he considers it the most important talk he’s ever given. View a recording of the PBS rebroadcast here.