2019 Brigham Health B.A.A. 10K team members get together with the B.A.A.’s mascot, Spike the Unicorn, prior to the race.

Ten thousand runners took to the streets of Boston on June 23 to participate in the annual Boston Athletic Association (B.A.A.) 10K, presented by Brigham Health, the exclusive fundraising partner of the race.

Brigham Health’s fundraising team comprised 550 runners, including 315 Brigham Health employees and 48 sub-teams. Together, the team raised an impressive $250,000 to support the Brigham’s work in areas most meaningful to them — with runners bringing stories of gratitude and inspiration as their personal fuel for the 6.2-mile race.

Mary Curran, a member of the Brigham’s Development Office, ran to raise funds and awareness for postural orthostatic tachycardia syndrome (POTS), a rare condition in which a change from lying to standing causes an abnormal increase in heart rate. After being diagnosed 10 years ago and informed she would never complete a marathon or climb a mountain, Curran ran triumphantly with the hope of helping others. 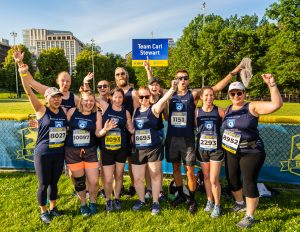 View more photos from the race.

“The only thing harder than getting sick was not knowing what was going on with me, and that was a really long and scary journey,” Curran said. “I’m hoping to spread awareness so I can shorten that path for anyone else who is suffering from POTS or doesn’t know it yet.”

After being critically injured in combat, U.S. Army veteran Brandon Korona underwent the Ewing amputation, an innovative surgery pioneered at the Brigham that enables amputees to interact with a robotic prosthetic as they would with a natural limb. Korona ran to support The Gillian Reny Stepping Strong Center for Trauma Innovation — and to prepare for the 2020 Boston Marathon.

“With a new chance to do things like this, I am absolutely taking it to show myself that I can be even better now than I was when I had two working legs,” Korona said.

And Lisa Knoppe-Reed, who donated one of her kidneys to a friend in 2015, raced to support the Brigham and Women’s Kidney Transplant Living Donor Center.

“Giving is such an important and rewarding deed that the short-term discomfort was worth it,” she said. “I ran the B.A.A. 10K to give back again to the place that allowed me to give so much.”