In honor of Father’s Day on Sunday, June 16, Brigham Bulletin is highlighting several Brigham dads with children who work here. 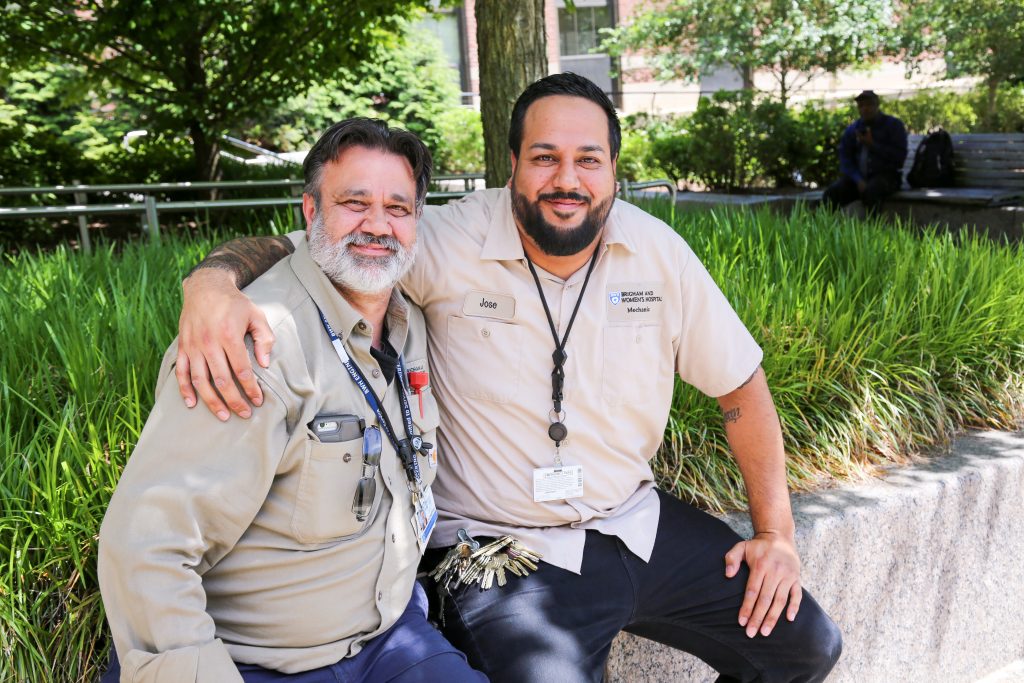 Two years ago, Jose Diaz Jr. found himself in an unexpected, difficult position. Shortly after purchasing his first home and learning he would soon welcome a daughter to the world, he was out of work. He turned to his father, Jose Diaz Sr., for guidance.

A member of the Brigham’s Engineering team, Jose Sr. alerted his son about a job opening in his department. At the time, Jose Jr. had already developed a diverse range of engineering skills and was in the midst of completing a training program to work on heating, ventilation and air conditioning systems.

After a competitive application and interview process, Jose Jr. was thrilled when he received the news that he would become a mechanic in the department.

“I just led him to the door; he opened it up,” said Jose Sr., an engineer supporting the Hale Building for Transformative Medicine. “I’ve really enjoyed working at the Brigham, and it feels great to have him here as well. At the same time, I’ve always encouraged him to be his own person here. We’re family, of course, but at work we’re two professionals.”

For Jose Jr., the story is a prime example of his father’s supportive, caring approach as a dad.

“He’s very wise, very knowledgeable and extremely, extremely reliable. He’s given me a sense of confidence to do things that I might not otherwise try to tackle on my own,” Jose Jr. said.

Jose Jr. said he’s learned a lot from his father over the years, but among the most important lessons has been to take his time when completing a task.

“Growing up, I used to rush things — whether it was because I wanted to be independent or just wanted to get ahead — and it didn’t always go well,” Jose Jr. said. “My dad came to the rescue every single time, but he’s also taught me how to avoid placing myself in situations like that in the future.”

Working together at the Brigham has also given Jose Jr. the opportunity to witness some of his dad’s expertise firsthand.

“It’s fascinating to see him do what he does, and he really practices what he preaches,” Jose Jr. said. “Growing up, I always heard his work stories at dinnertime, and now I’m part of those stories, which is pretty great.” 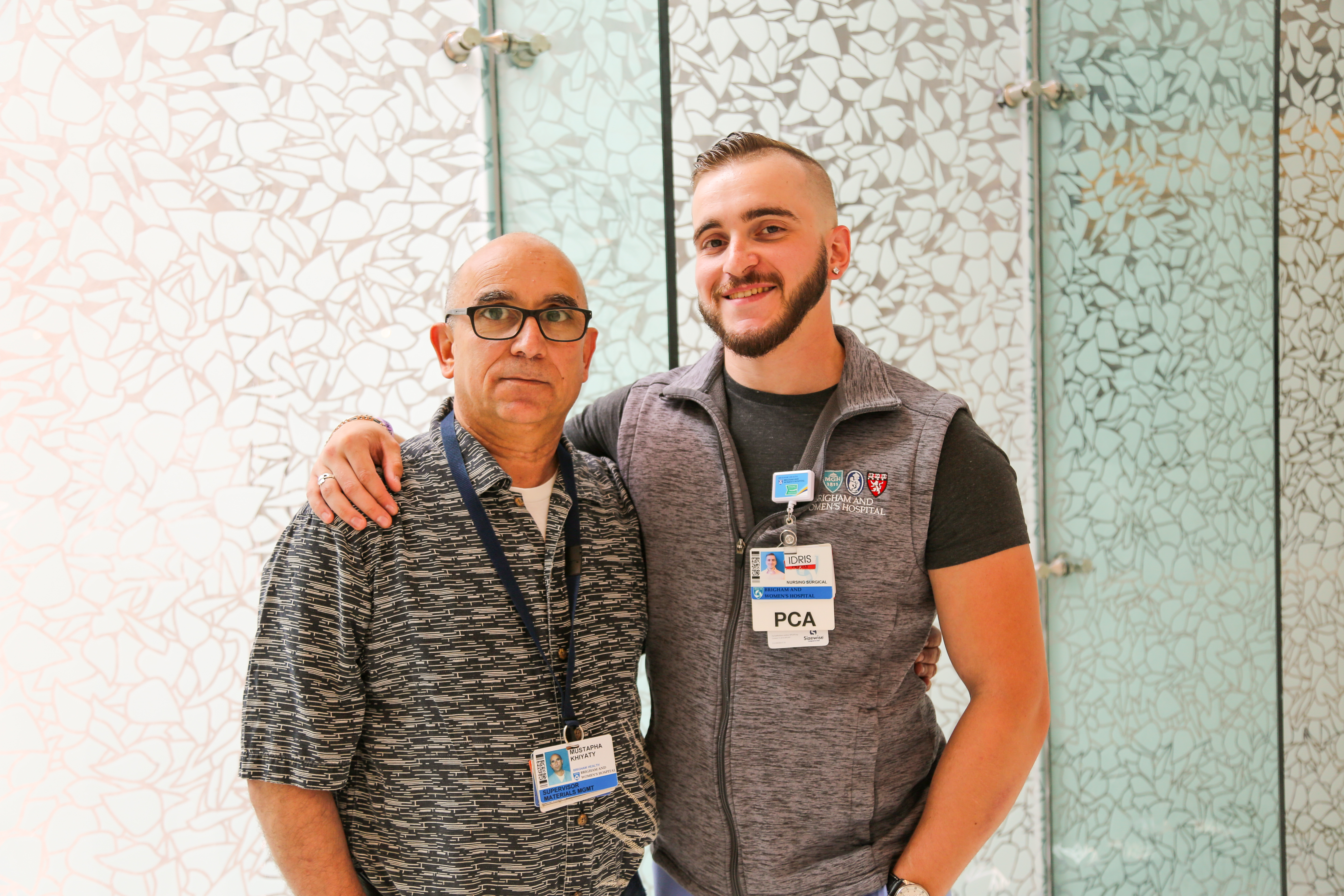 From left: Mustapha and Idris Khiyaty

Idris Khiyaty, BSN, looks up to his father, Mustapha, every day.

“He’s my role model,” said Idris, a patient care assistant on Braunwald Tower 8, who earned his bachelor’s degree in nursing from Curry College last month. “For his entire life, he’s worked hard to support our family and is always there for us. I hope to be like him one day.”

“When I think about the future, I think about Idris and all the wonderful things that are in store for him. No one can replace him — he’s perfect to me,” said Mustapha.

Throughout his life, Idris said his dad has taught him many things, including the importance of hard work and handling responsibilities while also taking time to appreciate life’s small pleasures.

“Whether it’s completing a project at work or watching a sunset at the beach, I’ve taught Idris to never take a day for granted,” Mustapha said.

Outside of work, Idris and Mustapha enjoy watching sports together. As an early Father’s Day gift, Idris surprised his dad with tickets to an upcoming Liverpool Football Club soccer game at Fenway Park.

Always Part of the Brigham Family 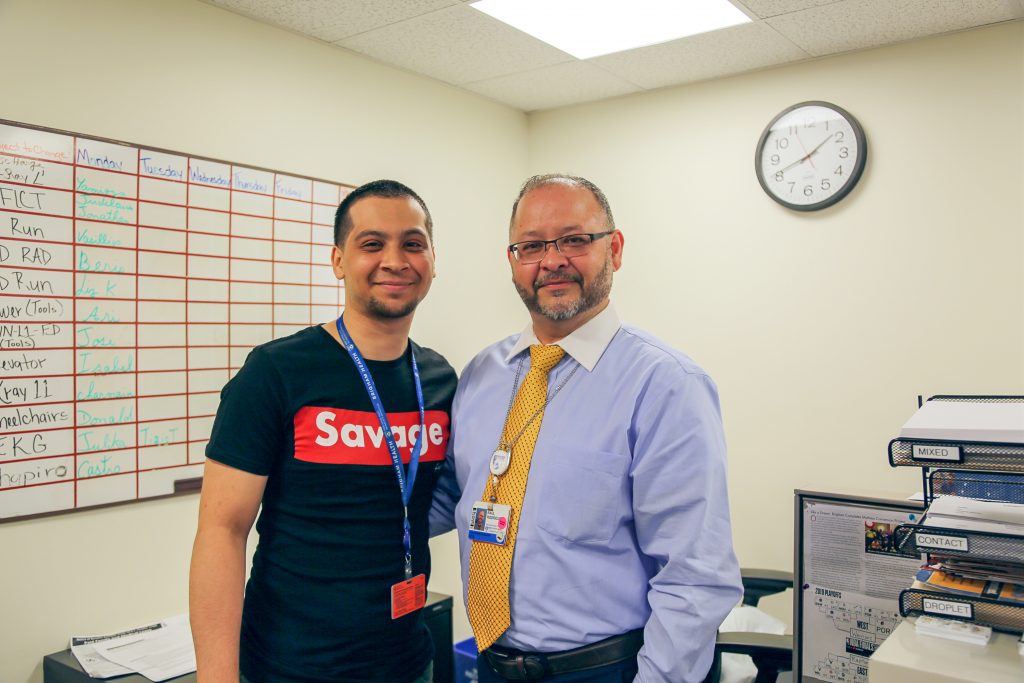 From left: Xavier and Raul Rodriguez

Since joining the Brigham a year ago as part of the Materials Management team, Xavier Rodriguez quickly became accustomed to hearing the same question whenever he bumped into someone at the hospital: “Hey, aren’t you Raul’s son?”

For Xavier, the question never gets old and continues to fill him with pride. His father, Raul, serves as senior manager of Central Transport and Equipment and has been with the Brigham for nearly 30 years.

“He’s so well-respected throughout the whole hospital,” said Xavier. “He’s a great leader.”

While the two enjoy spending time together, it’s rare they run into each other on the job. Raul works during the daytime, and his job often positions him behind the scenes as he manages and optimizes the transport of patients and equipment. Xavier typically works evenings, delivering materials and supplies to inpatient units.

In addition to having an appreciation for his dad’s professional accomplishments, Xavier — a father of two himself — said he hopes to live up to his example as a parent.

“The way my father raised me is the same way I want to raise my kids,” Xavier said. “Throughout my life, my dad pushed me to be better. I used to be a hard-headed kid, and he would still push me to be good because he knew what I was capable of doing. He never gave up on me, even when I thought about giving up on myself.”

Raul said he’s so proud to see his son become such a caring, hardworking father and employee.

“It’s funny how the circle works. He was born here. When he was little, he always came and visited me while I was working. And now he’s working for the Brigham himself,” Raul said. “It just goes to show: Once you’re in the Brigham family, you’re always family.”