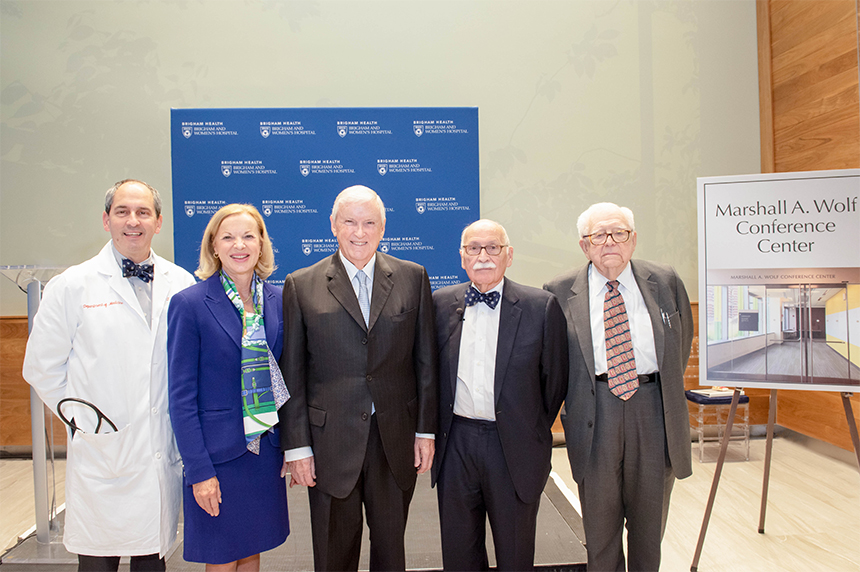 When Joel T. Katz, MD, learned in 1991 that he had matched to the Brigham’s Internal Medicine Residency Program, he knew it would be an important professional milestone. But it wasn’t until he trained under the program’s then-director, Marshall Wolf, MD, MACP, that he realized just how profoundly his life and career would be shaped by the lasting example his mentor set.

“Marshall was renowned for bringing the best out in people by thoughtfully demonstrating what a great doctor is,” said Katz, who now serves as director of the same program. “He turned over — and insisted we as interns turn over — every stone that could potentially help a patient. He taught us to question dogma, seek out feedback and ways to improve, and advocate for our patients and our colleagues.”

Wolf, who trained 1,200 physicians in his 28-year tenure as head of the residency program and who continues to mentor the next generation of practitioners, was honored during a celebration on May 16 for his innumerable contributions to medical education and tenacious pursuit of excellence. The event marked the dedication of the Marshall A. Wolf Conference Center on the third floor of the Hale Building for Transformative Medicine.

“Marshall talks about medicine being a team sport, not a competitive activity,” said Katz, one of several colleagues and former trainees who offered heartfelt reflections about Wolf’s influence on their personal and professional lives. “He taught us to define our own success by the accomplishments of those around us, and I still look up to that as my North Star.”

Eugene Braunwald, MD, who served as chair of the Department of Medicine when he hired Wolf as the residency program’s director in 1972, applauded him for creating a learning environment that became a nationwide model.
“Becoming a Marshall Wolf-trained internist became a badge of honor,” said Braunwald, founding chair of the Thrombolysis in Myocardial Infarction (TIMI) Study Group. “You brought dazzling intelligence, a deep knowledge of internal medicine and an uncanny ability to apply that knowledge to the benefit of your patients.”

A graduate of Harvard College and Harvard Medical School, Wolf completed his training in medicine and cardiology at the Peter Bent Brigham Hospital between 1963 and 1972. In practice for a half century at the Brigham, he became one of Boston’s most sought-after cardiologists and primary care physicians. He retired from clinical practice in 2015, transitioning to the role of emeritus vice chairman for Medical Education.

As a clinician and educator, Wolf instilled in his residents that humanity and compassion are every bit as essential in medicine as academic rigor and technical skills. He also created innovative pathways to train physician-scientists, primary care providers and every type of medical specialist.

“Your program became the standard by which other medical residency programs are measured,” said Brigham Health President Betsy Nabel, MD, who trained under Wolf as a resident. “This center will stand in your honor — letting every patient, physician, researcher and trainee who walks through our doors know how your work has improved and will continue to improve the lives of people today and generations to come.”

Wolf thanked his patients, trainees and his own teachers for keeping his practice anchored in kindness and the continual pursuit of knowledge.

He noted that among his proudest achievements was working with Braunwald to open the residency program to more women and underrepresented minority physicians. Before Wolf assumed the role of residency director in 1972, the hospital had only accepted one female applicant in the previous 15 years. Since then, the two physician leaders have trained more than 400 female residents, and today all four of the Brigham’s chief medical residents are women.

Over the years, Wolf also placed high importance on creating a nurturing environment for trainees — hosting dinners with his wife, Katie, at their home each year to welcome the newest class of interns — and expressed genuine concern for his students’ professional and personal success.

“He always puts the needs of others above his own, whether they be patients, interns, professors or friends. In doing so, he sets a standard of behavior that the rest of us can only hope to mirror,” said Joseph Loscalzo, MD, PhD, Brigham physician-in-chief and current chair of the Department of Medicine.