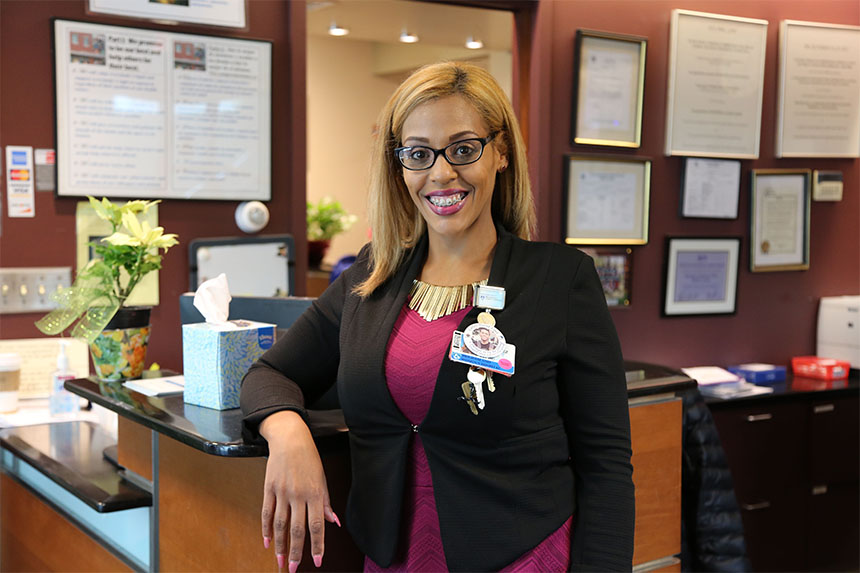 Like she did every time one of her children left the house, Yoselín Rodríguez instinctively glanced at the clock as her eldest, Carlos David Lind, 19, went out one Saturday night in October 2016 to meet up with friends. It was 9:54 p.m.

“Be careful,” Rodríguez said while he got ready to leave. He assured her there was no need to worry. They were going to a family party — nothing crazy. “Just be careful,” she urged.

Before stepping out the door of their Jamaica Plain home, Carlos repeated an affectionate goodbye Rodríguez had instilled in her three children since they were little: “Bendición, mami.” Blessings, Mommy. “I love you,” he added. Exactly one hour later, Rodríguez would later learn, Carlos was tragically killed by gun violence.

At the beginning of this year, Rodríguez, a community resource specialist and obstetrics case manager at Southern Jamaica Plain Health Center (SJPHC), resolved to channel a mother’s unimaginable grief into a positive force for change. With support from her family, friends and Brigham colleagues, she joined hundreds in marching in the 2019 Mother’s Day Walk for Peace on May 12.

Organized by the Dorchester-based nonprofit Louis D. Brown Peace Institute, the annual charity event brings together friends and neighbors to support mothers of murdered children and advocate for peaceful communities. The institute — a self-described center of healing, teaching and learning for families and communities affected by murder, trauma, grief and loss — was founded by Joseph and Clementina Chéry after the 1993 murder of their son, the organization’s namesake.

More than 50 people joined Rodríguez on Team Brigham this year to complete the walk from Fields Corner to Boston City Hall in memory of Carlos. A staunch advocate for achieving safer streets through community programs for young people and families, Rodríguez hopes to see the tide turn against violence locally and beyond.

“Everything I do is in his honor,” Rodríguez said. “As a mom, it is frustrating to see the number of homicides in our community. I ask myself, ‘When is this violence going to stop? Is it ever going to stop?’ Nobody should have to walk down the street with fear.”

Rodríguez said so many loved ones, including her Brigham colleagues and patients at SJPHC, have helped her heal.

After returning to work three months after Carlos’ death, Rodríguez, then a medical assistant at the center, said she was enveloped in kindness, patience and understanding. Advocates from the Brigham’s Violence Recovery Program, part of the Center for Community Health and Health Equity, and the resources provided by the Peace Institute helped her navigate the ups and downs of her family’s tragic loss. And above all, Rodríguez added, her children and Catholic faith give her strength.

Acknowledging her heart will always be heavy with the loss of her firstborn, Rodríguez said it fills her with joy to talk about Carlos and hear people ask or share stories about him. She wears a button with his photo every day.

In advance of the Mother’s Day Walk for Peace, Rodríguez said she couldn’t imagine being where she is today without so much support.

“It makes me feel powerful and blessed,” she said. “I know that I am surrounded by so much love.”

As part of their support for Rodríguez in the immediate wake of her son’s death, Violence Recovery Program advocates contacted the principal at Greater Egleston High School, where Carlos had been a senior. He was due to graduate that June and had already started taking college courses, with hopes of becoming an architect.

The team asked if the school would be willing to issue Carlos a high school diploma, which his mother would collect on his behalf during the graduation ceremony, explained Masika Gadson, an advocate in the program. The principal happily worked with school district officials to make it happen.

During the graduation ceremony, Rodríguez delivered a speech to the students and remained there to congratulate each one as they received their diploma. When Carlos’ name was called, she walked across the stage with pride in his honor.

As the event concluded, the principal announced that each student had been given a rose to gift to the person they most admired. “Carlos wanted you to have this,” the principal told Rodríguez as she handed her the flower.

It was an emotional day, but Rodríguez knew there was one more thing to do. She and her family went to the cemetery to show Carlos his diploma.

Fundraising for the Mother’s Day Walk for Peace, which benefits the Louis D. Brown Peace Institute, is ongoing. If you would like to contribute to Yoselín Rodríguez’s fundraising efforts for the charity event, click here.