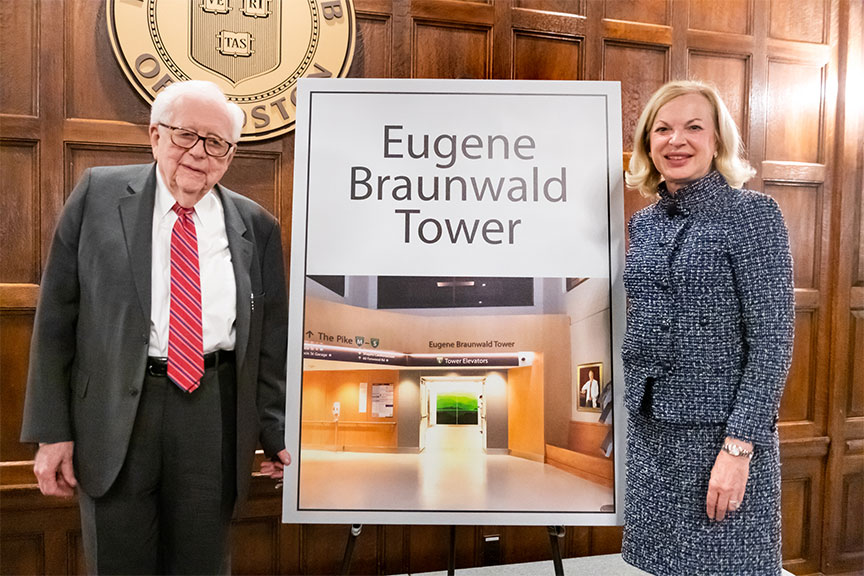 Describing his colleague and mentor’s career and legacy at the Brigham as “towering,” Victor Dzau, MD, president of the National Academy of Medicine and former chair of the Brigham’s Department of Medicine, said it’s only fitting that the hospital’s Tower building be named in honor of world-renowned cardiologist Eugene Braunwald, MD.

“Dr. Braunwald is a living legend,” Dzau said. “We recognize the Tower as a symbol of Brigham and Women’s Hospital. It is where patients are cared for and lives are saved, and, of course, it’s where generations of physicians, nurses and providers are trained. If the Tower is a symbol of the Brigham, Dr. Braunwald is the heart and soul of the institution.”

On April 29, family, friends and colleagues, including Dzau, joined Braunwald at the Harvard Club in Boston for a celebration of his distinguished career and the dedication of the Eugene Braunwald Tower.

Speaking to guests, Brigham Health President Betsy Nabel, MD, said since Braunwald joined the Brigham in 1972 as chair of the Department of Medicine, he’s set the highest standards of excellence in clinical care, research and education. Nabel also applauded his achievements in “recruiting outstanding faculty and reinvigorating groundbreaking programs,” including partnering with Marshall Wolf, MD, emeritus vice chair of medical education, to co-establish one of the most sought-after medical residency programs in the nation.

“The Brigham will stand in your honor, letting every person who walks through our doors know how your work has and will continue to save lives for generations of patients to come,” Nabel said.

A cardiovascular medicine specialist at the Brigham and the Distinguished Hersey Professor of Medicine at Harvard Medical School (HMS), Braunwald was chair of the Department of Medicine for 24 years. He was instrumental in the creation of the Tower — a 16-story inpatient building for medical and surgical patients.

In 1984, he was named the founding chair of the Thrombolysis in Myocardial Infarction (TIMI) Study Group, which to date has completed 62 clinical trials in cardiology. In 1996, he became a founding trustee and then chief academic officer of Partners HealthCare, as well as faculty dean for academic programs at HMS.

Braunwald was born in Vienna, Austria, from which he and his family escaped after the Nazi annexation and emigrated to New York. He earned his undergraduate and medical degrees from New York University, followed by a medical residency at John Hopkins Hospital. He began his career at the National Heart, Lung and Blood Institute, where he became the first chief of its Cardiovascular Branch and later clinical director of the institute.

During the event, guests heard heartwarming remarks from two other people who’ve worked closely with Braunwald throughout the years: Joseph Loscalzo, MD, PhD, Brigham physician-in-chief and current chair of the Department of Medicine, and Thomas H. Lee, MD, chief medical officer at Press Ganey and a physician in the Phyllis Jen Center for Primary Care. The night concluded with a proclamation and toast and words from Braunwald himself.

Lee, a resident when he first met Braunwald, reflected on the moment that amazed him the most about his mentor and friend. It was when Braunwald surprised him by granting Lee permission to write a biography about him. After spending a year interviewing Braunwald periodically, the biography, Eugene Braunwald and the Rise of Modern Medicine, was published in 2013.

Describing Braunwald as the “personification of the Brigham,” Loscalzo thanked his friend, colleague, teacher and role model for his contributions to medicine and the Brigham.

“His values are our values. His values are the Brigham’s values,” Loscalzo said. “With the designation of the Tower in his name, we provide institutional recognition of his central role in the modern history of Brigham and Women’s Hospital.”

4 Responses to “Tower Dedicated in Honor of Eugene Braunwald, MD”