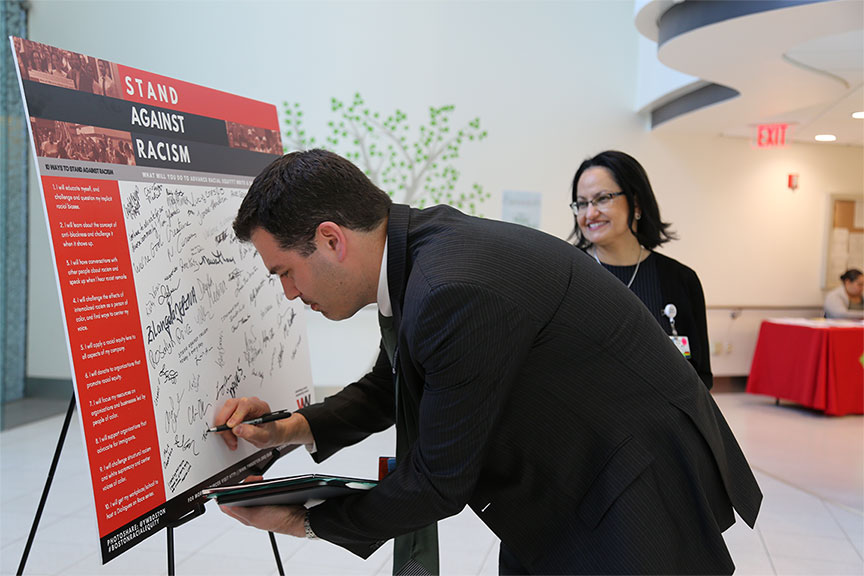 As RonAsia Rouse, MPH, reflected on the many signatures from her Brigham colleagues pledging to advance racial equity and oppose racial injustice, one word came to mind: unity.

The collection of approximately 300 names represented those who had participated in the Brigham’s third annual Stand Against Racism event on April 25, part of the nationwide movement by YWCA USA to raise awareness about racism and empower efforts to eliminate it.

Co-hosted by the Center for Diversity & Inclusion (CDI), Center for Community Health and Health Equity (CCHHE), Association of Multicultural Members of Partners (AMMP) and Office of Mediation, Coaching, Ombuds and Support Services, the initiative provided hospital leaders, faculty and staff with education and resources for supporting racial justice.

In her role as education and college success coordinator at CCHHE, Rouse works closely with many young people of color through the center’s Student Success Jobs Program, which partners with select Boston-area high schools to match students with mentors and paid internships across the Brigham.

When adding her signature to the pledge, Rouse said she thought about the powerful message the Brigham’s participation in this campaign sends to the next generation of health care workers.

“As a person of color working here myself, I think it’s really important to represent our collective stand against racism,” she said. “We’re standing against it not only as individuals but as a whole organization.”

Raising awareness and engaging in conversations around racial justice is a crucial aspect of cultivating an environment of inclusion, belonging and respect, explained Nawal Nour, MD, MPH, chief diversity and inclusion officer for faculty, trainees and students at Brigham Health.

“As a large and diverse community, Brigham Health has the unique privilege to engage in hospital-wide initiatives that work to foster, strengthen and promote racial justice,” said Nour, who also serves as division director of Ambulatory Obstetrics and Gynecology and founding director of the African Women’s Health Center. “By uniting so many of our voices in the Campaign Against Racism, our community has shown that we are committed to the ongoing work to advance racial equity and justice, and that we are stronger because of it.”

Brigham Health President Betsy Nabel, MD, who stopped by the event to pledge her support, pointed to the initiative as one example of living our values.

“Racism has no place in our society, let alone an environment of healing,” Nabel said. “By participating in this campaign, we are reaffirming our commitment to inclusion and our belief that we are stronger together.”

Pledge participant Elizabeth Harry, MD, assistant medical director and director of faculty development and well-being in the Brigham and Women’s Physicians Organization, agreed that it was paramount for the Brigham community to publicly express its support through efforts like this.

“It is important to re-anchor into our values often,” said Harry, who also serves as assistant program director and director of wellness for the Internal Medicine Residency Program. “This allows us to stay on course and remember the things that are important to us. It is vital to come together, as a community, and say out loud what we value.”

Rachel Brown, a senior administrative assistant in Hospital Administration, applauded the hospital for hosting the event, noting it was a meaningful acknowledgment of systemic racism and the Brigham’s commitment to stand against it.

“I think it’s important for members of the Brigham community to participate in this pledge because it shows solidarity that we stand behind racial justice,” said Brown, who also signed the pledge. “I was happy to see the number of signatures on the board, as they authenticated the unity that we have in our Brigham community.”

In addition to facilitating open and honest dialogue around issues of institutional inequity, the campaign provided an opportunity for faculty and staff to learn more about the ongoing work of the CDI to implement systemic changes that advance diversity, inclusion and equity, Nour added.

“The signatures are small yet significant, and they are part of a larger effort to foster an inclusive environment here at Brigham Health,” she said. “The main message for me, and our community, is power in numbers. Creating a diverse and inclusive community requires everyone to be involved.”