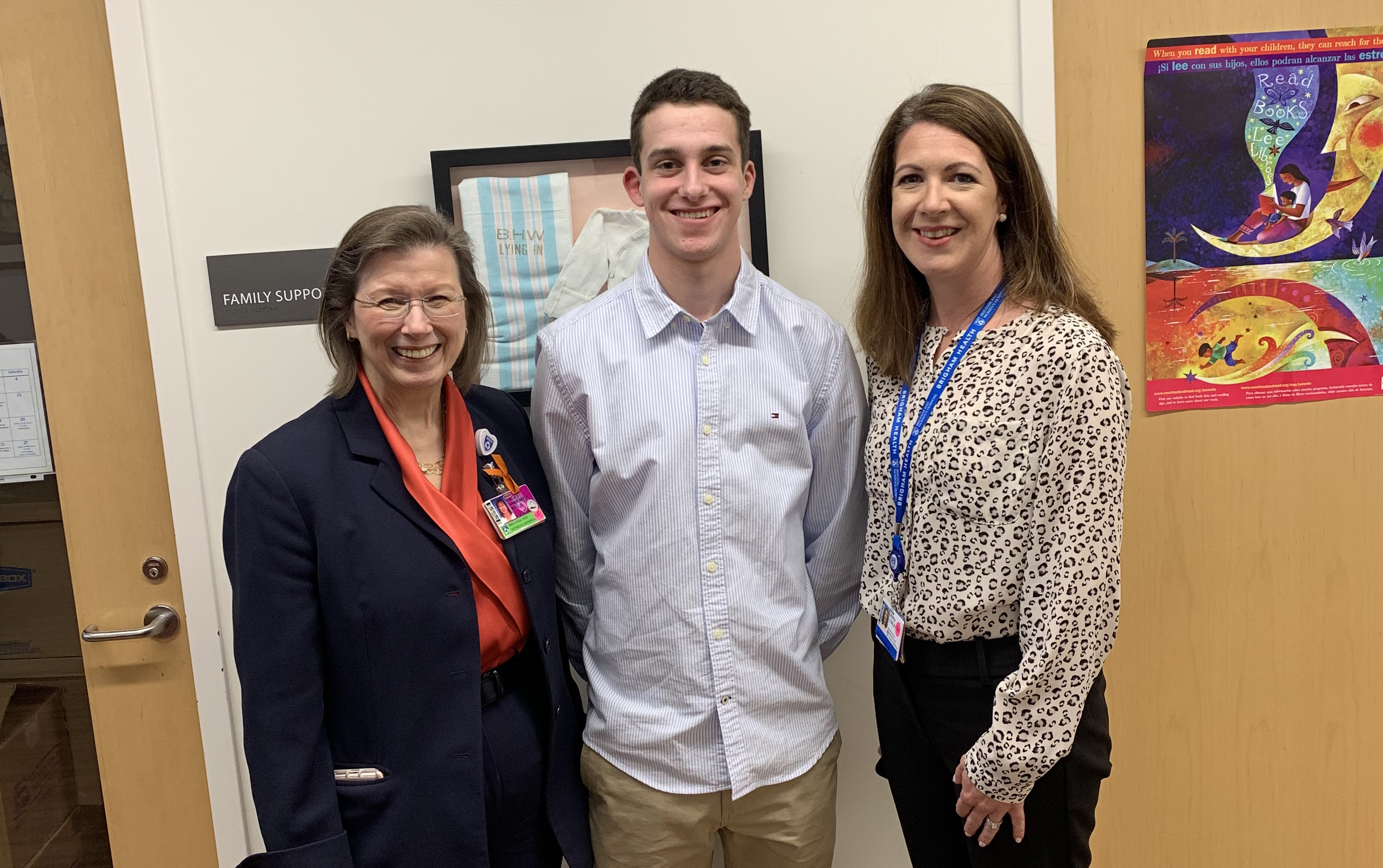 Kyle Wilcox spent the first 81 days of his life in the Brigham’s Neonatal Intensive Care Unit (NICU). Eighteen years later, he’s a healthy high school senior who is preparing for graduation and college. Inspired to give back to the hospital that he and his family called home for nearly three months, Wilcox visited the Brigham on April 18 and donated gifts to parents whose babies are currently in the NICU.

“I wanted to do something special for the Brigham — the place where my life began,” said Wilcox, who was born prematurely, weighing 1 pound, 15 ounces. “The NICU team helped my family so much when I was a patient here.”

A senior at Millis High School, Wilcox was required to complete a community service project before graduation. When he received his assignment at the beginning of the school year, he knew right away he wanted to do something with the Brigham’s NICU to enhance the experiences of families whose infants are being cared for here.

“Having a newborn in the NICU can be a very stressful time for parents,” Wilcox said. “My parents still talk about those early days often and the miracle that the NICU provided for me.”

For the last several months, Wilcox has raised close to $1,700 to provide NICU parents with gifts, including baby clothes and gift cards for meals and parking at the Brigham. Last Thursday, he delivered 20 care packages to the unit and met two families who received his donations.

Wilcox said coming back to the Brigham and saying thank you to the hospital that helped him thrive was special.

What made the experience even more meaningful was he had the opportunity to work on this project with neonatologist Linda Van Marter, MD, MPH, vice chair of the Department of Pediatric Newborn Medicine, who cared for Wilcox when he was a patient in the NICU in 2001.

Van Marter said Wilcox’s gifts were chosen to help parents with some of the challenges with having a baby in the NICU, making life a little easier for families and honoring his own parents’ journey in the process.

“I can’t help thinking that the greatest gift Kyle has given each of them is his presence with them in the NICU,” Van Marter said. “Here we have a young man, formerly a tiny preemie, offering not only material gifts but also the hope and inspiration to parents that their babies might someday grow up to be as healthy, smart, kind and generous as he is. Kyle’s project touches the hearts of all who knew him when he was a patient in our NICU.”

Patrice Droney and her husband, Brian, were spending time with their daughter, Maggie, in the NICU when Wilcox stopped by to deliver a basket of items to them.

Droney said it meant a lot to her family that Wilcox donated these gifts to NICU families. She plans to tell her daughter about Wilcox someday and what he did to help others.

“Kyle is an inspiration,” she said. “We’re so grateful to him and everyone at the Brigham for everything they’ve done for us.”

Wilcox’s mother, Kris, and father, Reg Wilcox, III, PT, DPT, MS, OCS, executive director of Rehabilitation Services, also came to the NICU and watched their son deliver the packages. They couldn’t help but smile as he interacted with NICU staff and families.

“It was definitely one of those times when I was a proud dad,” Reg Wilcox said.