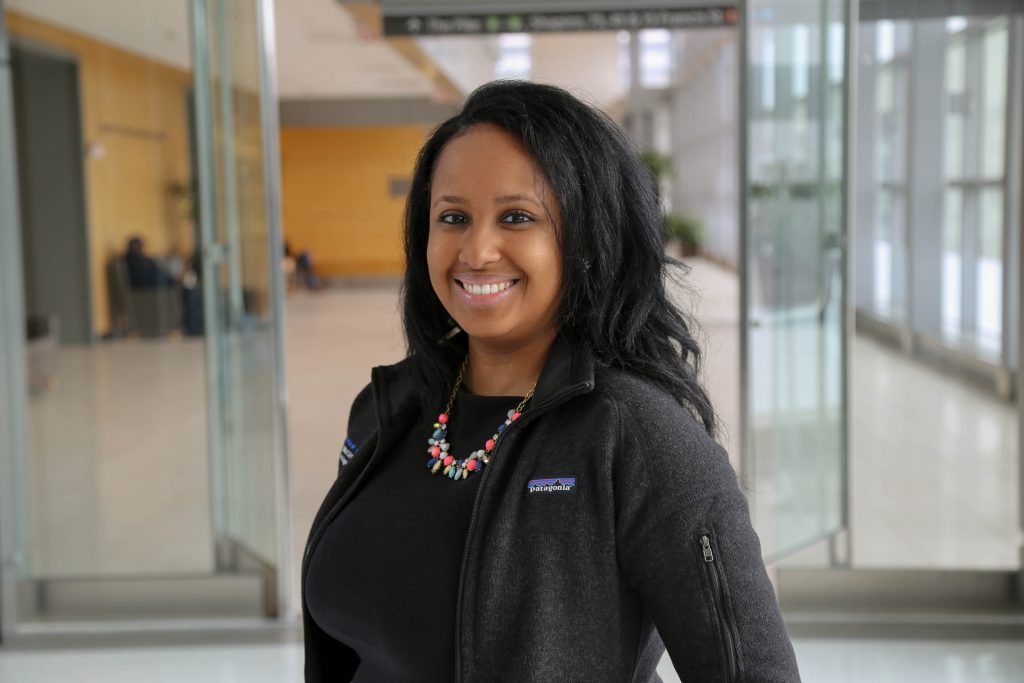 When Carla Monteiro learned a few months ago that she would receive the Future of Social Work award from the National Association of Social Workers (NASW), she burst into tears.

“I thought back to 20-year-old me,” Monteiro said. “I was a new and single mom. I didn’t have a car. I wasn’t working. I didn’t have a degree. Receiving this award meant so much to me because it has allowed me to reflect on where I was then and where I am now.”

Since she was young, Monteiro has been driven to help others. Growing up, she witnessed violence and substance use disorder in her Dorchester community — experiences that would have a profound influence on her career and fueled her dedication to alleviating suffering.

“The things I saw when I was younger brought me to want to become a social worker and help people who are struggling with mental health and substance use,” she said. “It’s truly my calling.”

Today, Monteiro is working hard to achieve these dreams.

She’s a care transition specialist in the Bridge Clinic and completing a social work residency in the Emergency Department (ED). In addition, she’s an advanced standing student at Boston College and will graduate next month with a master’s degree in social work.

Although most of her days are packed, Monteiro says she wouldn’t trade her schedule for anything in the world.

“When I walk through the doors each day when I come to work, I still feel the same excitement as I did on my first day here,” she said. “The Brigham has truly exceeded my expectations of what I thought it would be like to work in a hospital setting.”

Trancy Escobar, director of Care Continuum Management and one of Monteiro’s supervisors, said her team is thrilled Monteiro is part of the Brigham family.

“Carla exemplifies the true definitions of advocacy, empathy, compassion and dedication toward the patients and their families served in the Bridge Clinic, Emergency Department and Brigham community,” Escobar said. “We are excited to watch Carla progress through the next stage of her career.”

The experiences Monteiro has had in her career have shaped her path to becoming the social worker she’s always aspired to be.

Last year, she completed a social work residency in the Department of Neurology at the Brigham. Earlier in her training, Monteiro pursued internships that gave her the opportunity to work with at-risk youth and incarcerated men and women.

Working at the Brigham for a year now, Monteiro said it has been a blessing to continue doing what she loves in a health care setting. In the Bridge Clinic, she works with patients grappling with addiction and facilitates continuity of their care and connection with community resources. In the ED, Monteiro performs assessments on patients and provides emotional support to them and their loved ones.

Christin Price, MD, program administrative director in the Bridge Clinic, said Monteiro has been a critical part of the clinic since it opened last year.

“Carla is not only dedicated to serving our patients, but she also has such a tremendous set of skills and community connections that truly bring her service to a new level,” Price said.

Monteiro is grateful for her Brigham mentors and colleagues who’ve supported her. She hopes she can be an example for other women and show them that anything is possible if you set your mind to it.

“What I love about the Brigham is that we all work together, every day,” she said. “Everyone’s opinion matters.”

Jeffrey Robbins, LICSW, clinical social worker in Neurology, mentored Monteiro when she worked as a resident in the department. He said her commitment and work ethic set the bar not only for students seeking a career in social work but also for experienced clinicians.

“Carla is the quintessential ambassador for the ideals and principles of social work practice,” Robbins said. “Her dedication to her work with individual patients is matched only by her steadfast efforts on behalf of the communities she represents.”

When asked what keeps her motivated, Monteiro didn’t hesitate to answer: her 17-year-old son, Mesiah, whom she calls her “mini social worker” because of his supportive and empathic nature. For eight years of his life, Monteiro raised him as a single mom — they did everything together and became inseparable.

“I’m so proud of him and the person he has become,” said Monteiro. After accepting her recent award, she sent a text to Mesiah, thanking him for being such an important part of her life.

6 Responses to “‘Truly My Calling’: Aspiring Social Worker Advocates for Those in Need”