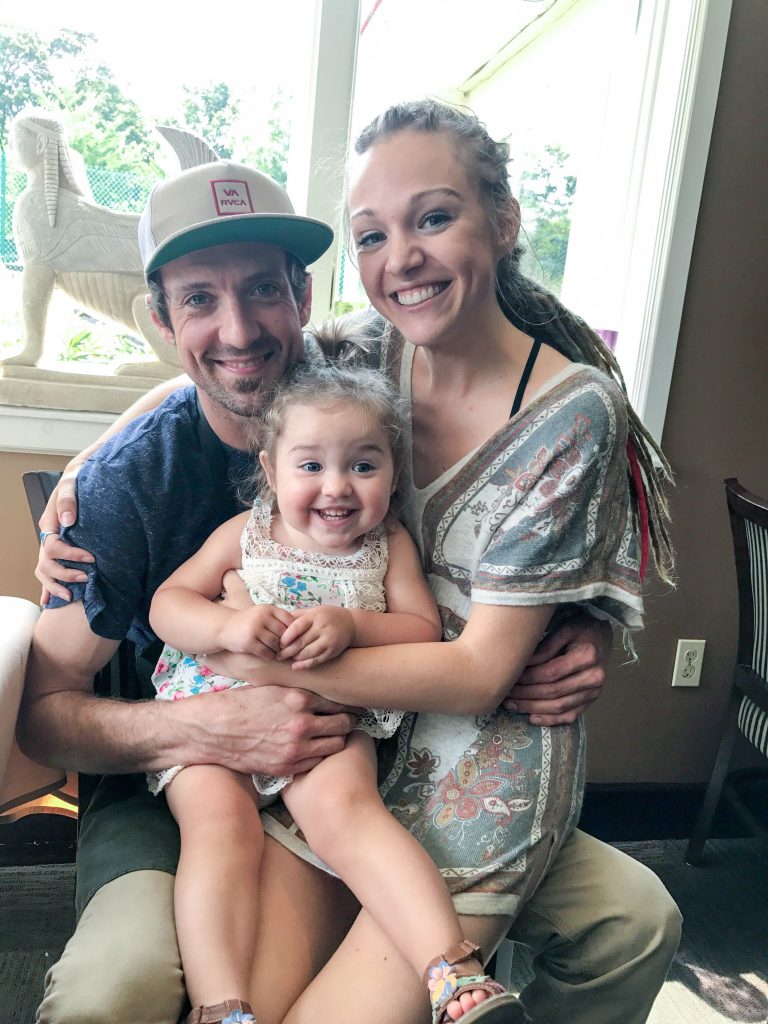 Mel McFayden with her fiancé, Spencer Thomas, and their daughter, Harper

As long as she can keep putting one foot in front of the other, Mel McFayden is not going to let anything slow her down. Diagnosed in 2017 with an autoimmune disease that is known to cause muscle fatigue, the lifelong runner said she’s never let her diagnosis get in the way of achieving her goals.

Among them is completing the Boston Marathon, which she’ll set out to do on Monday with her teammates on the Stepping Strong Marathon Team to honor and pay tribute to those who aren’t able to run.

“I cannot imagine anything more inspiring than running in my first Boston Marathon with the Brigham team,” said McFayden, an Ipswich resident. “Since I was little, I’ve always gone into Boston on Marathon Monday to cheer on all of the runners. It’s surreal that I’ll be running the 26.2 miles in just a few days.”

Two years ago, McFayden began to experience issues with her eyes. One of her eyelids started to droop, her vision became blurry and she was seeing double. Referred to the Brigham, she saw specialists in the Division of Neuro-Ophthalmology. Soon after, she was diagnosed with myasthenia gravis, a chronic autoimmune disorder in which the body attacks its own neuromuscular connections. The disorder causes problems with communication between nerves and muscle, resulting in weakness and often affects the voluntary muscles of the body, especially the eyes, mouth, throat and limbs.

McFayden had surgery at the Brigham in 2018 to remove her thymus gland, a butterfly-shaped organ that sits in front of the heart and makes immune cells. While the role of the thymus gland in myasthenia gravis is not fully understood, people who have their thymus removed often don’t need as many medications to manage their symptoms and tend to have fewer problems related to the disorder within three years of surgery.

Since having the procedure and another surgery to help repair her vision, McFayden says she’s feeling great. Her eye problems have been corrected and she hasn’t had further issues. But that isn’t her only source of joy lately — she and her fiancé, Spencer Thomas, are welcoming their second child, due this summer.

McFayden said in addition to running for those who no longer can, she’s participating in the marathon to raise awareness of Stepping Strong’s mission and to thank the hospital that helped her regain control of her life.

“The Brigham cared for me from the moment I became a patient here,” she said. “My care team has always believed in me and listens to what I have to say. That means everything to me.”

Since learning she was selected for the Brigham team, McFayden has been counting down the days until the big race. She’s eager to join her teammates in crossing the finish line and hopes her story inspires others to never give up.

“I can confidently say that I am ready to run Boston because of the care I received at the Brigham,” McFayden said. “I am happy to raise money for the hospital and show people that by staying hopeful and optimistic, a story like mine is possible.”

Established five years ago, The Gillian Reny Stepping Strong Center for Trauma Innovation has evolved from one family’s bold response to a personal tragedy to a thriving, multi-institutional, multidisciplinary hub that is transforming trauma research and care for civilians and military heroes who endure traumatic injuries and events. You can advance this critical work by supporting the Stepping Strong Marathon Team. Click here to meet members of the team or make a gift. Learn more about the center at BWHSteppingStrong.org.