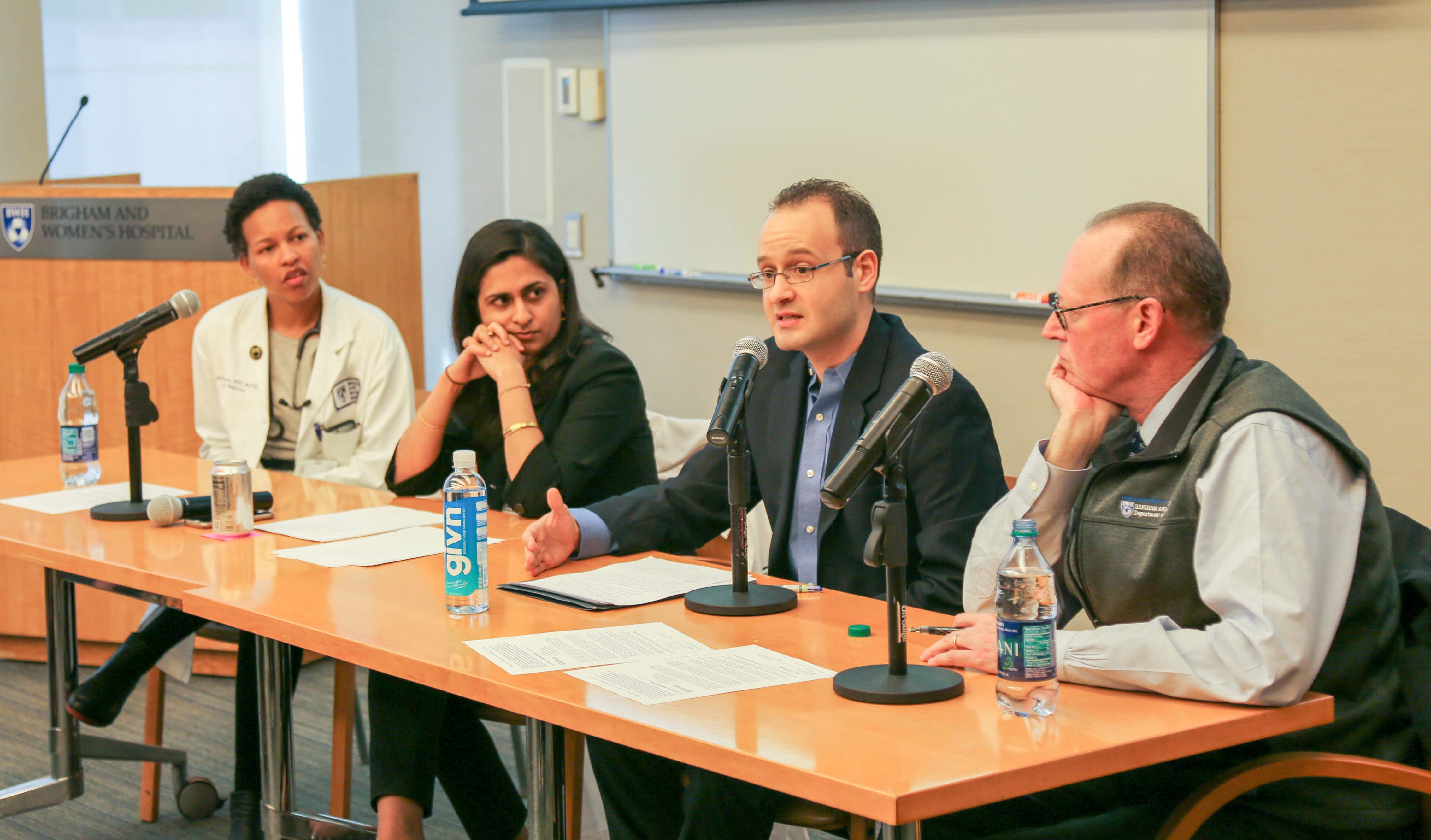 When an uninsured, 44-year-old Latino patient arrived at a Philadelphia clinic to seek help for severe back pain, neither he nor his provider was prepared for the complex web of structural barriers that would ultimately affect his care.

Presented as a case study to a panel of Brigham physicians, the patient’s story sparked a lively discussion about how providers could address the challenges this man and his care team encountered. The event kicked off The New England Journal of Medicine (NEJM)’s new “Case Studies in Social Medicine: Seeing Patients Through a Social Lens” series. The case presentations, which complement a monthly NEJM “Perspective” feature by the same name, explore social medicine concepts and their clinical implications.

The Brigham event, held March 29 in a packed Zinner Breakout Room with overflow via webcast in Bornstein Amphitheater, was co-sponsored by the Residents’ Social Justice Committee and NEJM’s case series editors.

As told by George Karandinos, a student in the Harvard/MIT MD-PhD Program at Harvard Medical School, who co-authored the original case study and presented it to the panel, the Philadelphia patient was attempting to manage several chronic medical conditions, including diabetes and asthma, in addition to his back pain. He also had a history of incarceration and poverty, and nearly a lifetime of emotional and physical trauma.

Over the course of his life, the patient had spent 10 years in prison, in which time he suffered a weight lifting injury and was beaten by a prison guard. After his release, his back pain continued to flare up due to heavy lifting required by his job. In the clinic, the patient disclosed to his provider that he occasionally purchased oxycodone illicitly on the street to help manage his pain.

Hoping to help his patient begin to heal, the provider gave him ibuprofen and a five-day prescription for oxycodone, enrolled him in the clinic’s diabetes and hypertension programs, and booked a follow-up appointment. But fearing rearrest after his earlier disclosure about obtaining painkillers illegally, the patient refrained from filling his prescription and did not return for his next appointment.

In a conversation guided by Paula Chatterjee, MD, MPH, a chief medical resident in Internal Medicine, panelists Paul Farmer, MD, PhD, chief of the Division of Global Health Equity, and Michelle Morse, MD, MPH, a hospitalist and assistant program director of Internal Medicine Residency, examined how issues around structural violence can intersect with patient care. Structural violence refers to the ways in which large-scale inequities in social, political, institutional or economic systems — such as racism or the criminal justice system — can cause physical harm.

“As clinicians, one of our jobs is to understand the embodiment of structural forces as disease,” Farmer said. “Social forces get in the body as specific pathologies.”

A patient from a poor neighborhood might be suffering breathing problems due to asbestos exposure in dilapidated housing, panelists noted. Similarly, a patient who was recently incarcerated may be experiencing chest pain due to tuberculosis, which has a much higher incidence in prisons.

Acknowledging that these are difficult issues for providers to navigate in everyday patient interactions, speakers offered attendees a framework for different scales of intervention, ranging from individual patient encounters to large-scale social change. For example, when treating a patient who has a history of opioid use disorder, a provider can prescribe medication-assisted treatment, such as buprenorphine, or refer them to the Brigham’s Bridge Clinic, Chatterjee said.

As for the case study patient, he later obtained reliable access to health care after Pennsylvania expanded Medicaid in 2015. Karandinos noted that while he began regularly seeing a primary care physician and improved some aspects of his health, he also continued to face setbacks due to complications related to existing chronic illnesses and his family’s precarious economic situation.

“I don’t think it’s enough to simply be nicer to patients or more culturally sensitive, or to look for magical screening questions, even though being kind, sensitive and attentive are critical in a case like this,” Karandinos said. “For our most vulnerable patients, well-meaning clinical care has to be paired with a structural imagination to envision interventions that are proportional to the challenges our patients face.”