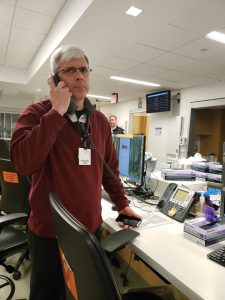 Steven Palmer responds to a call in the Emergency Department as part of the exercise. 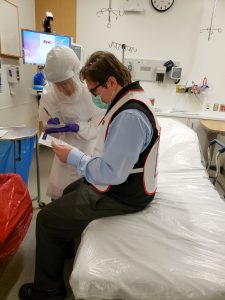 How would we respond if there was a patient infected with Ebola at the Brigham?

“During an actual crisis, we know it would be extremely challenging to remember every detail of our Emergency Management protocol,” said Eric Goralnick, MD, MS, medical director of Emergency Preparedness. “This was a chance for us to activate and implement our Ebola response plan, ask and answer questions, and identify barriers and successes as a team.”

This exercise was the culmination of a yearlong Ebola planning process, which included a tabletop drill — a meeting to discuss a simulated emergency — last month and the development of a viral hemorrhagic fever disease and Ebola virus disease control plan.

Since May 2018, the Democratic Republic of Congo has faced the world’s second-largest Ebola epidemic in history, resulting in 676 deaths and more than 400 untreated cases to date. According to the World Health Organization, the outbreak is spreading faster than ever throughout the country as medical responders and care providers do everything they can to mitigate it.

Like most U.S. hospitals, the Brigham would serve as a frontline health care facility during a local outbreak. In this role, the hospital would identify and isolate patients with possible Ebola, notify Infection Control and public health officials, and have enough personal protective equipment (PPE) on hand for staff to provide at least 12 to 24 hours of care. The Brigham would also prepare patients for transfer to an Ebola assessment hospital or treatment center, such as Massachusetts General Hospital, if needed.

The latest Ebola preparedness exercise began with a 7 a.m. briefing in the Zinner Board Room, during which participants discussed these objectives and other pertinent protocols, such as establishing the definition of a suspected Ebola case (also known as a patient under investigation, or PUI), the characteristics of Ebola and the process for Emergency Department (ED) evaluation and management of the patient.

After the briefing, the on-call Infectious Disease attending was notified that a mock patient was under investigation with symptoms consistent with Ebola and a travel history to an area with active Ebola cases. Response staff quickly donned training vests to signal they were part of a planned exercise and sprang into action in the ED.

During an initial screening process, triage staff learned the patient had recently traveled to the Democratic Republic of Congo and was a public health researcher who visited Ebola treatment centers and had contact with people evaluated for Ebola. The patient received a surgical mask to wear and was directed to the triage room while the triage nurse and ED attending were immediately notified that a patient had screened positive for Ebola. From there, role-players carried out the next steps for safely isolating and providing care to the patient actor while wearing the appropriate PPE and communicating the situation to other teams.

Reflecting on the event while still in character as the patient, Mark Litvak, program coordinator in Emergency Preparedness, expressed his appreciation for the team’s response. “They were stellar in that I came in as a ‘father’ and they kept me up to date on how my ‘daughter’ was doing throughout the process,” he said. “They brought her to the ED Family Room to keep her healthy and safe while ensuring I received the care I needed.”

Other reported strengths included excellent teamwork, clear communication and troubleshooting on the fly, and the identification of unmet needs and real-time solutions.

While the Ebola response plan laid a good foundation for the multidisciplinary response, there are always lessons to be learned when a plan is activated, said Chris Smith, MHA, MEP, senior manager in Emergency Preparedness. Looking ahead, the Brigham will refine its ED incident command framework, create a more inclusive and structured coordination call with DPH and streamline the intake of patient data across teams to support effective communication and decision-making.

“These valuable insights will ultimately strengthen our response and better prepare us for the future,” Smith said.