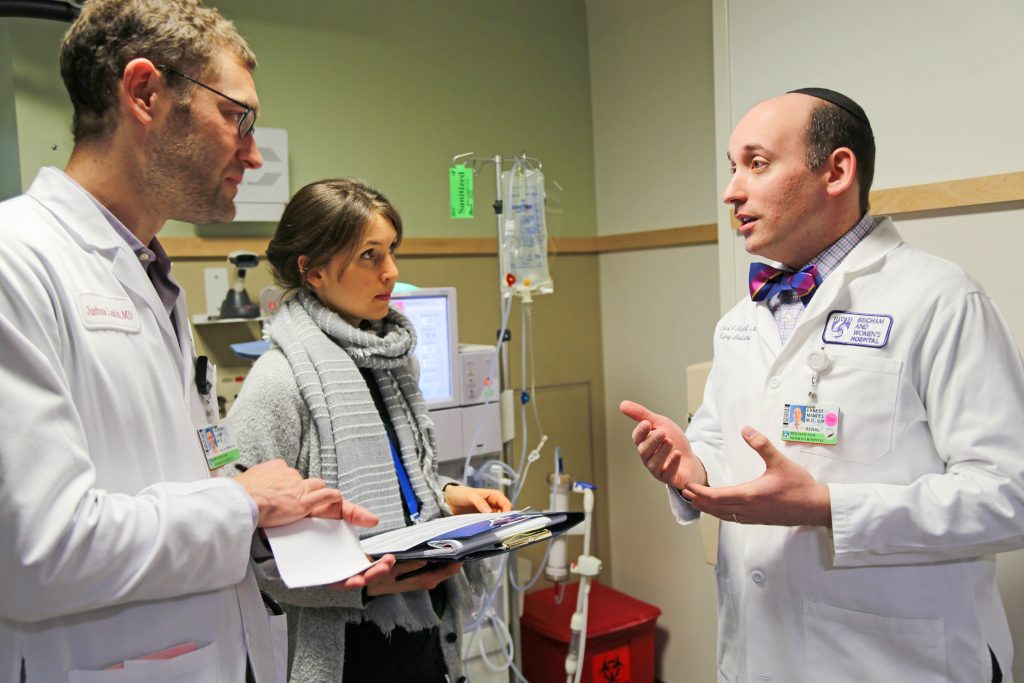 Since he began working more closely with the Division of Renal Medicine over the past several months, palliative care physician Josh Lakin, MD, says one thing has become abundantly clear: Patients with kidney disease face a complex constellation of medical complications, psychosocial concerns and quality-of-life issues.

In addition to dealing with the symptoms of kidney failure, patients with end-stage renal disease are often managing other serious, related illnesses and disorders, including cardiovascular disease, depression, diabetes and malnutrition. On top of that, dialysis — the only treatment for kidney failure besides an organ transplant — tethers patients to a machine for about four hours at a time, multiple days per week, to clear toxins from their bloodstream.

“I have not met a single patient yet whose only health issue is kidney disease,” Lakin said. “These patients spend a lot of time in the health care system.”

Treating a serious illness like kidney failure requires a delicate balance that can be challenging to navigate not only for patients and families but also the multidisciplinary teams that care for them. While attending to the disease itself is of paramount importance, so is preserving a patient’s quality of life and ensuring end-of-life care plans are consistent with his or her wishes.

This is the crossroads at which faculty and staff across several divisions are hoping to make a difference by reimagining the way palliative care is delivered and expanding access to these important services through two new, novel programs: Kidney Pal and Heart Pal.

Developed in collaboration with their respective clinical partners, each Pal program embeds a three-person team of palliative care specialists — consisting of a physician, nurse practitioner and social worker — directly in inpatient units, with plans to expand to outpatient settings. Kidney Pal supports patients with end-stage renal disease. Heart Pal, which grew out of an existing collaboration with several teams in the Division of Cardiovascular Medicine, supports the Advanced Heart Disease program in the Heart & Vascular Center.

Launched in January, the programs stem from a broader strategy to extend the reach of palliative care services throughout the Brigham, explained James Tulsky, MD, chief of Palliative Medicine. “We wanted to align with specialty areas where need was high and create integrated models through which we could not only provide those services but also train local providers in palliative care skills and competencies,” Tulsky said. “We hope Heart Pal and Kidney Pal will be models for future Pal programs across the Brigham.”

Members of the Pal teams participate in their respective unit’s daily rounds, huddles, and patient and staff meetings to proactively identify and address any palliative care needs.

“We know palliative care and hospice are very underutilized by heart failure patients, and that’s part of the reason we’re targeting this population,” said Kristen Schaefer, MD, medical director of Heart Pal. “We’re really trying to lead the charge to figure out how to help people live well with whatever serious illness they have and prepare for the final periods toward the end of life.”

Apart from these two programs and a specialized Intensive Palliative Care Unit at Dana-Farber/Brigham and Women’s Cancer Center, palliative care at the Brigham primarily operates as a consult service.

“One of the things that’s been really nice about being integrated with the team is we’ve had the opportunity to see patients earlier than we normally would,” said Lakin, who serves as medical director of Kidney Pal. “Now, a nephrologist or nurse will point us to patients they’re concerned about but who aren’t yet at end of life, giving us time to get to know them and learn about their priorities before we push on the more difficult conversations.”

Pal team members emphasized that the programs’ strength is a direct result of its multidisciplinary model.

“We each have such a different lens,” said Kate Sciacca, MSN, the nurse practitioner for Kidney Pal. “If the three of us walk into a room to see a patient, we’re each thinking about different aspects of care. The ability to consider nursing, medical and social needs together in the context of palliative care is invaluable.”

Schaefer agreed: “Palliative care is built as an interdisciplinary practice,” she said. “Without that model, it’s like practicing with one hand tied behind your back.”

The partnership has been mutually beneficial for the clinical specialties that the Pal programs support.

“Over the past several years, I have learned a tremendous amount from Dr. Schaefer while caring for heart failure patients as they make very difficult decisions about advanced therapies or palliative and hospice care,” said Joanne Weintraub, APRN-BC, a nurse practitioner in the Center for Advanced Heart Failure. “I look forward to collaborating with the new Heart Pal team, including Stephanie Cassone, MSN, FNP-BC, and Tracy Ng, MSW, to give our Advanced Heart Disease patients the very best care.”