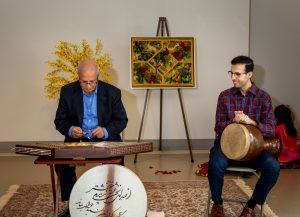 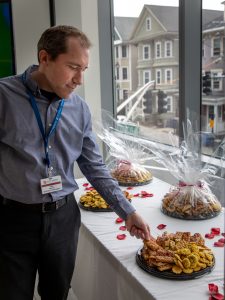 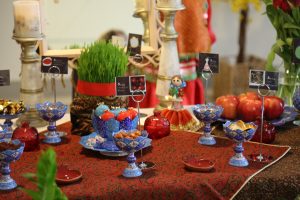 A Haft-sin table is adorned with symbolic items.

On March 21, a Persian New Year celebration filled with live music, dance, food and fun on the Tower 2 mezzanine, near the Shapiro Bridge, was a vibrant example of the Brigham’s commitment to celebrating its diverse community.

Also known as Nowruz, Persian New Year is a secular holiday and marks the first day of the new year on the Iranian solar calendar. Celebrated for more than 3,000 years by people of different faiths from what was once the Persian Empire, Nowruz also coincides with the beginning of spring in the northern hemisphere, occurring when the sun crosses the celestial equator and equalizes day and night. Families traditionally gather on Nowruz to observe several rituals, such as meeting at the home of their oldest family member to pay their respects.

“I am a fortunate Iranian-American woman who has had the chance to emigrate from Iran and live in the U.S. and Canada for the past 21 years,” said Marjan Sadegh, PharmD, a senior pharmacist in Pharmacy Services, who hosted last week’s event alongside her family and friends and with the help of a multidisciplinary team of Brigham colleagues. “My life experience during this time — from starting out at a bagel store as a new immigrant to becoming an established professional and licensed pharmacist in both countries — has taught me so much.”

During the Nowruz celebration at the Brigham, Ryan Sameen Meshkin, a student at Harvard Medical School, and Ali Karimi, grandfather of two of the performers, played Persian music on a santoor, tonbak and daf. A colorful table known as a Haft-sin was filled with items symbolizing spring and renewal, assembled with help from Sadaf Atarod, PhD, of the Department of Pediatric Newborn Medicine, and Faranak Farrohi, of the Cardiovascular Imaging Program. Sadegh performed a traditional holiday dance with her daughter and two friends.

“The Persian New Year celebration was remarkable,” said Kristin Schreiber, MD, PhD, of the Department of Anesthesiology, Perioperative and Pain Medicine, who stopped by the event. “It brought a mixture of beautiful music, graceful dance and fascinating facts about an ancient culture. The dancing, costumed children were a breath of fresh air. It was a perfect example of the diversity of our community — it really brightened my day.”

Sadegh feels a sense of responsibility to share her Iranian heritage with her colleagues, represent her country of origin in an authentic way and counter negative portrayals of it in mainstream media.

“I feel extremely fortunate to be a role model for my children to show them the true value of freedom. I wish this gift could be given to every woman in the world, including those in Iran,” she said. “The humanitarian treatment I’ve experienced in both Canada and America has lifted me up and gifted me the ability to live a free life.”