Howard Hiatt, MD, a physician, scientist, educator and mentor whose career spans seven decades, continues to heed the call to service. At 93, the co-founder and associate chief of the Division of Global Health Equity eagerly seeks to elevate the next generation of health care professionals and push the boundaries of health equity locally and globally.

Among his long roster of mentees was the late H. Richard Nesson, MD, former president of the Brigham and first CEO of Partners HealthCare. Nesson had trained under Hiatt as a resident at Beth Israel Hospital, where Hiatt was chairman of its Department of Medicine before accepting an appointment as dean of the Harvard School of Public Health. 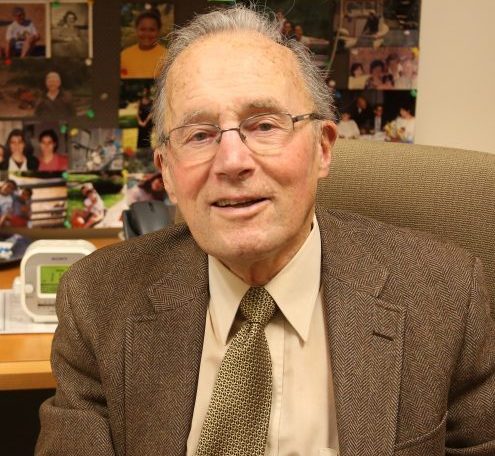 Nesson eventually followed his mentor to the School of Public Health — where Hiatt served a 12-year tenure defined by his transformation of the school’s approach to teaching public health — before coming to the Peter Bent Brigham Hospital. Shortly after Hiatt stepped down from his deanship, his former mentee, by then serving as president of the hospital, invited Hiatt to join the Brigham family.

Hiatt said it quickly became clear how he could make a difference here.

“Two of the residents whom I knew said to me, ‘We’re interested in global health. Would you work with us?’” Hiatt said. Those two residents were Paul Farmer, MD, PhD, and Jim Yong Kim, MD, PhD, who later co-founded Partners In Health.

Along with Hiatt and Victor Dzau, MD, then the chair of the Brigham Department of Medicine, they consolidated and confirmed their global efforts with the launching of the Division of Global Health Equity at the Brigham in 2002. In recounting the story, Hiatt points out a framed photo on the wall of his office in One Brigham Circle today: a jubilant group shot of the team taken the day the Division was born.

Nearly two decades later, the Division of Global Health Equity has made innumerable contributions in reducing disparities in disease burden and improving outcomes here and abroad. It also boasts a novel residency program in global health equity, launched in 2004, that combines rigorous training in internal medicine with the advanced study of public health.

“We knew that the creation of a residency in global health equity for young physicians was the most important step to be taken by the new division,” Hiatt said in a recently published biography, Howard Hiatt: How This Extraordinary Mentor Transformed Health with Science and Compassion. (The biography is authored by Mark Rosenberg, MD, who is, perhaps unsurprisingly, one of Hiatt’s former students and mentees.)

While the concept had enthusiastic backing from hospital leaders, there were challenges — notably, funding.

“The Brigham residency program, like those in every American teaching hospital, is supported by federal funding from Medicare, but this funding is restricted to programs that train physicians for medical care in the U.S.,” Hiatt noted in the book. “A residency in global health, directed at patients in other countries, must find its funding elsewhere. Therefore, we were going to have to do some serious fundraising.”

Hiatt turned to the best financial advisor he knew: his brother, Arnold, who recommended he reach out to a close friend, Francis Hatch Jr., a businessman, philanthropist and former state politician. After a series of meetings, Hatch extended financial support for the division’s faculty and trainees. To acknowledge his contributions, Hiatt suggested the faculty-funding program be named after Hatch, but Hatch declined.

“He would not welcome such an arrangement. Only after rather extensive discussions did he agree to permit his name to be used for the faculty endowment — with a condition,” Hiatt said in the book. “I would [have to] agree to have my name on the future residency program. I was no more eager than he to have my name used, though for a different reason. I saw the naming rights as an enticement for a serious donor who might endow the residency, and I was reluctant to give it away for free, as it were.”

Ultimately, Hiatt agreed to the condition, and the program continues to bear his name and that of his late wife, Doris.

In the book, Rosenberg closes this story with an important clarification: “What Howard left out was that Frank Hatch wanted to have Doris and Howard Hiatt’s name on the residency program because Doris and Howard had, in their push for global health equity, done so much for so many for so long.”

It is difficult to overstate the scope of Hiatt’s influence of public health, which continued after his departure from the deanship. With Harvard Law professor Paul Weiler, LLM, he spearhead the landmark 1991 Harvard Medical Practice Study, described as the largest and most comprehensive investigation ever of the medical malpractice system’s performance. Closer to home, he collaborated with then-Brigham colleague Lee Goldman, MD, MPH, to establish the Program in Clinical Effectiveness, a joint program between the Brigham’s Department of Medicine and the Harvard School of Public Health to bring quantitative sciences into physician training. This program continues, so sought after that the School of Public Health eventually enlarged its biggest auditorium to accommodate the demand.

But for his many accomplishments, Hiatt is most at ease talking not about himself but rather his effusive admiration for his mentees and his appreciation for those who nurtured his own growth. There is another framed photo in his office — a black-and-white portrait of a smiling scientist examining a specimen — that serves as a subtle but meaningful homage to the advisor who had such a profound effect on him.

Hiatt was just a few years out of medical school when he met the man who altered the course of his life and career. It was the early 1950s, and Hiatt, then in his mid-20s, had been invited to join a new endocrinology unit at the new National Institutes of Health (NIH) Clinical Center in Bethesda, Md. Construction of the unit had been delayed due to a labor strike, however, and Hiatt arrived to find that his position was on hold. Not wanting to be idle, as he later put it, he found his way to the research lab of an NIH biochemist whom he had never met before: Bernard Horecker, PhD.

Horecker happily took Hiatt under his wing and served as a caring, supportive mentor for the young physician who, until that point, had little experience in the lab. Working under Horecker, Hiatt found a passion for science and flourished as an investigator. After two years, Hiatt accepted a clinical position at Beth Israel Hospital back in Boston, but Horecker continued to serve as a dedicated mentor.

“At one point, Horecker said to me, ‘If you want to really do serious science, you ought to learn something in this new field of molecular biology,’” Hiatt recalled. One hub of molecular biology then was the Pasteur Institute in Paris. Horecker urged him to go, and, to Hiatt’s surprise, his department chair at Beth Israel agreed. Once accepted to the institute, Hiatt joined the research team that went on to prove the existence and function of messenger RNA — a tremendous breakthrough.

Described in the biography, the story is among the first to illustrate how much mentorship has shaped Hiatt’s prolific career.

“When you consider how crucial mentoring has been in my life, you get a sense of why I feel mentoring is not just an obligation but also a privilege,” Hiatt said. “I’ve been very lucky to be involved with so many marvelous young people. Mentoring really has been a wonderful privilege.”

Sonya Shin, MD, MPH, an associate physician in the Division of Global Health Equity who founded, with Hiatt’s encouragement and backing, the Community Outreach and Patient Empowerment (COPE), a PIH-affiliated program in the Navajo Nation, said she has always been touched by the genuine admiration Hiatt shows for mentees like her and her colleagues.

“I’ve often been surprised when he’s provided me with encouragement and admiration. Here is a great man who has stood alongside so many other great leaders. How can I compare?” said Shin, who now serves as a consulting physician at Gallup Indian Medical Center in New Mexico. “Yet Howard genuinely sees greatness in everyone, and his encouragement brings out that talent in those he mentors. It’s not only an amazing gift, but it also means that mentoring is a source of joy and discovery for Howard as well.”