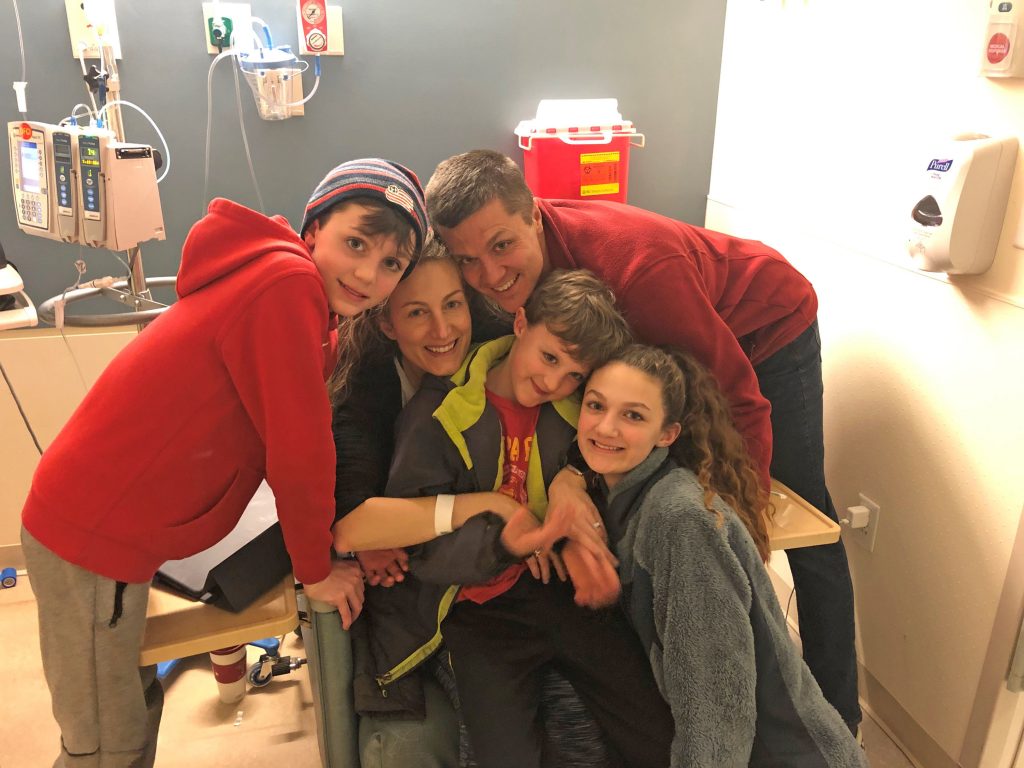 Tamara Barber (second from left) with her family on her final day of chemotherapy last December.

Six years ago, Tamara Barber couldn’t fathom being at risk for colon cancer. It wasn’t just that she had no family history of the disease. Barber was 34 years old.

Yet that was the age when she began noticing persistent abdominal discomfort and rectal bleeding. She initially chalked up the symptoms to something less serious, such as hemorrhoids, and pushed aside any concerns for the next 18 months. “I was thinking, ‘Maybe it’s just my body changing,’” recalled Barber, a mother of three and consumer-market researcher from Sudbury.

As her symptoms continued and then worsened, Barber’s husband prodded her to make an appointment with her doctor. Her primary care physician referred her to Kunal Jajoo, MD, clinical director of the Brigham’s Division of Gastroenterology, Hepatology and Endoscopy, who recommended Barber undergo a flexible sigmoidoscopy exam, a procedure used to evaluate the colon. The mass was quickly evident and soon confirmed as cancerous. Two weeks later, after being diagnosed with stage 3 colon cancer at age 35, she was in surgery.

“It surprised everybody. It had never really occurred to me that it could be anything more than hemorrhoids,” Barber said. “Had it not been for Dr. Jajoo’s intuition to do that first procedure, I am sure I would have ended up in a more critical situation.”

While primarily known as a disease that affects older adults, colorectal cancer is increasingly affecting people under 50. To better support the unique needs of this patient population, Dana-Farber/Brigham and Women’s Cancer Center (DF/BWCC) announced the launch of the Young-Onset Colorectal Cancer Center on March 5.

The center will provide expert, compassionate and cutting-edge care to young-adult colon and rectal cancer patients. Research is also at the heart of the center, which is committed to understanding the growing incidence of colorectal cancer in young adults and developing new ways to prevent, detect and treat it.

Colorectal cancer patients are considered young-onset if they are diagnosed before they turn 50 years old. Since 1994, cases of young-onset colorectal cancer have increased by 51 percent, according to the National Cancer Institute. This rising incidence recently led the American Cancer Society to revise its colorectal screening guidelines to start earlier — at age 45 instead of 50 — for individuals at average risk.

“By the year 2030, colon cancer is estimated to rise 90 percent and rectal cancer to rise by a staggering 124 percent in these young patients,” said Kimmie Ng, MD, MPH, director of the Young-Onset Colorectal Cancer Center and a member of Barber’s care team. “This highlights the urgency of trying to identify new ways to prevent, treat and catch these cancers earlier at a curable stage.”

One of the first of its kind nationally, the new center is supported by a multidisciplinary team that includes surgeons, radiation and medical oncologists, in addition to radiologists with specific expertise in colorectal cancers. In addition, each patient is paired with a program coordinator dedicated to young-adult patients who focuses on the patient’s needs, oversees appointment scheduling and referrals, and serves as a direct point of contact with the treatment team for care coordination.

“The center will address the unique issues faced by these young patients, including therapies that affect fertility,” said Ron Bleday, MD, co-director of the Brigham’s Colon and Rectal Cancer Center, chief of the Division of Colorectal Surgery and a member of Barber’s multidisciplinary surgical team. “We will offer molecular testing to determine the best course of treatment for our patients and, if genetically related, screening for family members is available.”

While Barber became a patient before the center was formally developed, she said she has benefited tremendously from DF/BWCC’s comprehensive, coordinated and compassionate model of care.

“A really good example of this is when I had my surgery. Not only did Dr. Bleday come to visit me and follow up, but also my medical oncologist, radiation oncologist and my gastroenterologist — whom I hadn’t seen in nine months — all stopped by to say hello and check in,” Barber said. “That in and of itself was super touching.”

Last year, Barber’s care team at DF/BWCC spotted a small recurrence of cancer, necessitating radiation therapy, chemotherapy and a temporary ileostomy. As she recovers from that most recent round of treatment, Barber said she is feeling stronger each day and optimistic about the future.

“If the team hadn’t been so comprehensive in their surveillance, I don’t think this recurrence would have been caught as early as it was,” she said. “I feel I’m in good hands with my team — that they’re not going to let me out of their sight for many years to come.”