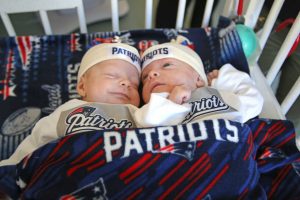 Benjamin and Samuel snuggle in their Patriots gear. 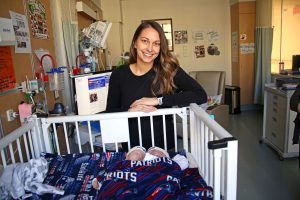 Mother Wendy Samaha shares a moment with her twins in the NICU.

On Jan. 31, two of the Brigham’s tiniest patients geared up to cheer on the New England Patriots in Super Bowl LIII.

Twin brothers Benjamin and Samuel, who were patients in the Brigham’s Neonatal Intensive Care Unit (NICU), cuddled up next to each other as they wore Patriots onesies and hats made and donated by NICU nurse Karen Smith, RN. Smith also made two Patriots blankets for the babies, who were discharged from the hospital the following day. The twins’ mother, Wendy Samaha, PAC, a physician assistant in Thoracic Surgery at the Brigham, couldn’t wait to get them home in time for the Super Bowl last Sunday.