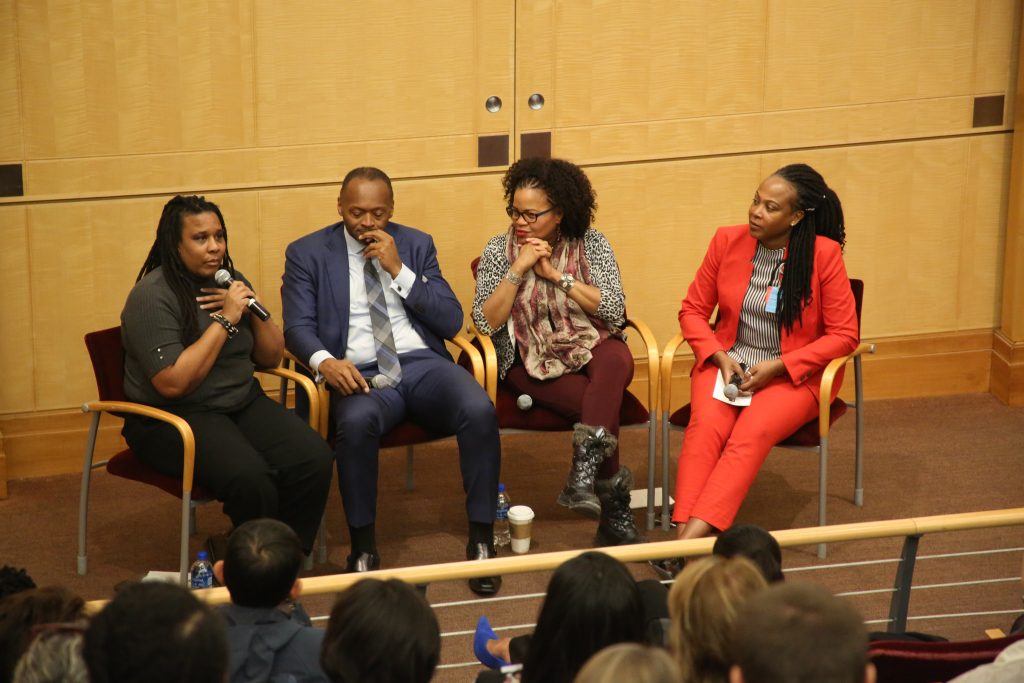 Boston City Councilor Kim Janey has a special place in her heart for the Egleston Square branch of the Boston Public Library. Growing up with two working parents, she went there every day after school and found not only a welcoming, safe place to study but also a sense of community.

“The librarians there were like second moms to me,” Janey recalled, highlighting them as just one example of countless unsung heroes in our neighborhoods who serve their communities in ways big and small.

Janey shared the story during a panel discussion with other local civic leaders as part of the Brigham’s annual celebration of the life and legacy of the Rev. Dr. Martin Luther King Jr., which focused this year on “The Impact of Serving Others.” Moderated by Tim Ewing, PhD, vice president of Employee Diversity, Inclusion and Experience, the discussion highlighted the importance of linking service with community.

“I think we really have to get back to—and I think we are getting back to—this notion that we are responsible for our sisters and brothers,” Janey said. “We are all better off when we understand our connectivity to others around us. We either rise together or we fall together.”

Fellow panelist Shelita Bailey, director of Workforce Development and Volunteer Programs at the Brigham, agreed that building personal relationships in a community is just as important as larger-scale political action.

“On my street, every child there knows that if you’re doing something that you’re not supposed to being doing, Miss Bailey is coming outside to talk to you,” Bailey said. “But that’s not expected anymore; people are afraid to talk to our children, and each other, and lend a hand. We can’t all be Dr. King, but we all have something to give, and we all have a way that we can reach out and be great in our own roles.”

Michael Curry, JD, senior vice president and general counsel of the Massachusetts League of Community Health Centers, said he felt called to service from a young age and, like others, drew inspiration from the examples he saw in his own community. His mother, despite facing the challenges of single parenthood and poverty, often gave clothing and food to neighboring families in their Roxbury public housing development.

This experience also ultimately shaped the focus of his service. As he entered adulthood, Curry said he better understood the context surrounding the racial, socioeconomic and health inequities he saw in the low-income, predominantly black neighborhood in which he grew up—and, notably, how that differed from the experiences of his white college classmates in Minnesota or the affluent family for whom his mother worked as a housekeeper in Chestnut Hill.

“I made a commitment in my time at Macalester College that I would come back and do this work, and, like Dr. King, I think it’s a calling. It’s an example that you give, and it becomes a lifetime passion,” Curry said.

Speakers also underscored the importance of nurturing relationships with people with diverse backgrounds and identities.

“When we think about building community, we have to be ready for some hard work, and some moments will be easier than others,” said Nia Evans, co-founder and director of the Boston Ujima Project, a community-organizing and economic-development initiative supporting underserved communities of color. “We have to build bridges. If we don’t do that work, we won’t arrive at real justice or real peace.”

Ewing agreed: “It’s very easy to associate and connect with those whom we’re most comfortable, but the opportunities lie when we stretch ourselves to move beyond our comfort zones and go somewhere we haven’t been before.”

Janey shared her advice for achieving that. “There’s an approach that I’ve taken in my own neighborhood, which is this notion that you build bridges while the sun is shining, and you don’t wait for the storm come,” she said. “What I mean by that is it’s important to build these relationships while things are good. If you wait until there’s a dispute around a parking spot or the music’s too loud, it’s harder to have an ongoing relationship with someone.”