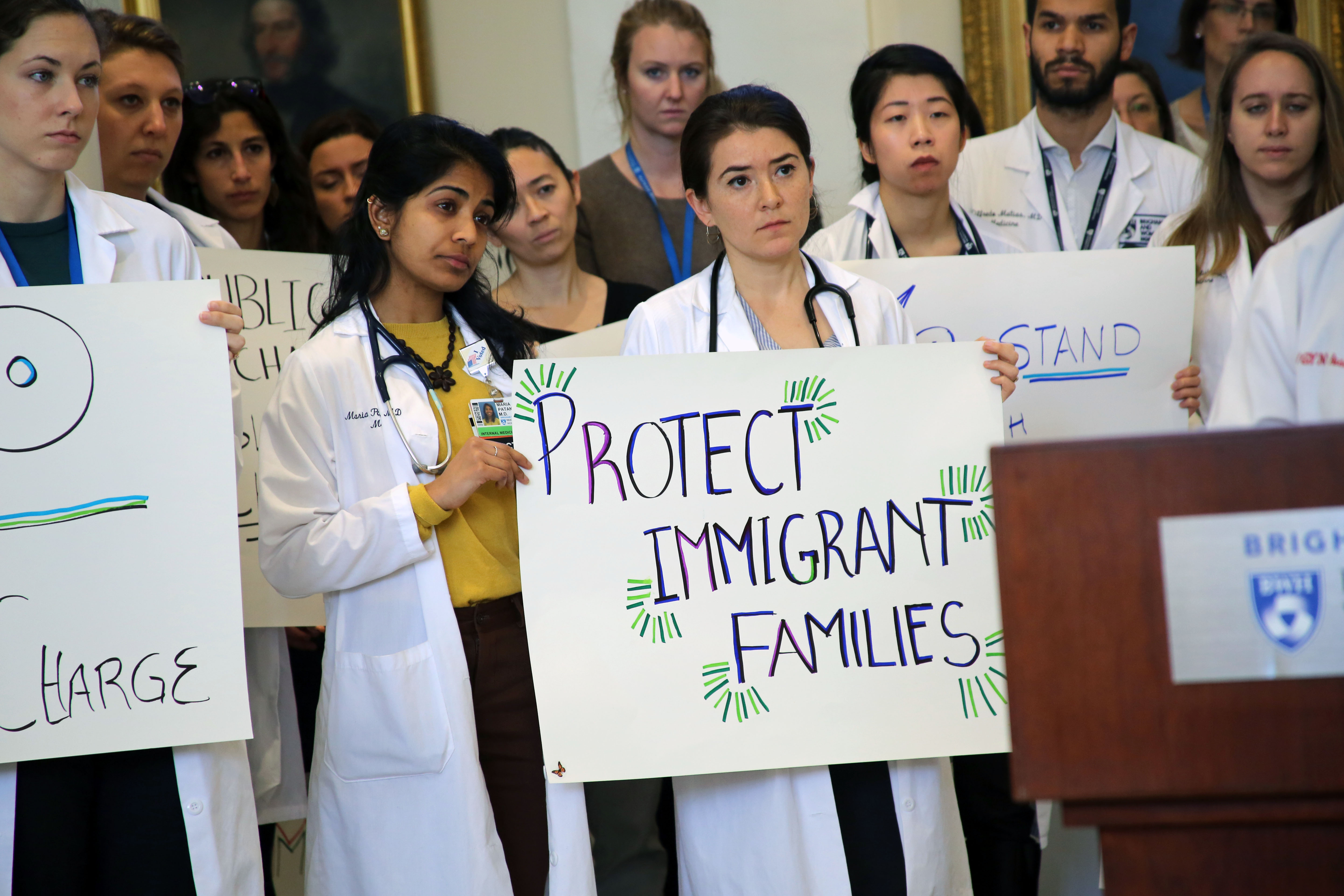 From left: Residents Maria Patanwala and Fabiola Molina join colleagues in rallying against changes to the public charge rule.

When he reviews the list of patients assigned to him in clinic each day, Internal Medicine resident Doug Jacobs, MD, MPH, begins to worry—but not about whether he can determine the correct diagnosis or treatment plan. As he cares for immigrant patients with complex health care needs, Jacobs fears their next visit might be their last at the Brigham.

That’s because proposed changes to a federal process known as the public charge rule threaten to affect the legal status of documented immigrants who access public benefits, including health care and food assistance programs.

When the government defined a “public charge” in 1999, the use of most public benefits was excluded from this determination. Changes proposed by the Trump administration this fall are expected to have widespread effects that could scare immigrants into declining benefits.

Jacobs, founder and first president of the Brigham’s House Staff Council, was among those in the Brigham community who voiced their opposition on the issue during a rally to support the Brigham’s immigrant patients, families and staff on Dec. 4.

Organized by residents, the event brought together Brigham Health leadership, clinicians, researchers, trainees and staff, who held posters declaring, “We stand with immigrants,” and chanted, “No to public charge!” in the Fish Rotunda at 15 Francis St.

Historically, documented noncitizen immigrants, such as those with student or work visas, have been subjected to the public charge determination. This process allows the government to assess how likely an individual is to become dependent on the government for subsistence, and it uses this information to influence immigration decisions. Immigrants labeled as a “public charge” can be denied lawful permanent resident status (green cards) or entry into the U.S.

In the past, only cash-assistance programs like Temporary Assistance for Needy Families and Supplemental Security Income have counted toward the public charge designation. However, drastic changes have been proposed to expand the definition to encompass most public benefits—including Medicaid, the Supplemental Nutrition Assistance Program, Medicare Part D and housing assistance. If the rule is amended, an immigrant’s eligibility to obtain a green card could be jeopardized if he or she accesses these public benefits.

Brigham Health President Betsy Nabel, MD, expressed her firm opposition to the proposed changes both personally and as a physician, noting that she will submit a formal public comment on behalf of the Brigham to the Department of Homeland Security.

“We have always believed that access to health care is a basic human right. That’s been part of our values since our doors opened in 1913,” she said. “We also take pride in that we are an organization that welcomes everyone, and I want to underline and underscore ‘everyone.’”

Nawal Nour, MD, MPH, chief diversity and inclusion officer for faculty, trainees and students at Brigham Health, said that as an obstetrician and gynecologist, she has seen firsthand how the current political climate has distressed immigrant patients.

“‘Now what?’ is a question that many of my patients have been asking recently,” said Nour, who also serves as director of both the Ambulatory Obstetrics practice and the African Women’s Health Center at the Brigham. “It’s not, ‘Now what’s wrong with me?’ or, ‘Now what should I be doing with my medication?’ It’s, ‘Now what else is going to happen to us?’”

Reflecting on a recent appointment with a Somali patient who is pregnant, Nour said she worries about this growing distrust influencing how immigrant patients view the health care system.

“Here’s my real concern: If immigrant families lose confidence in us because of continued actions taken by this administration, already well-documented racial and ethnic disparities in care could be even further exacerbated,” she said. “We have worked so hard to achieve culturally competent care here at Brigham and Women’s Hospital. We now must go that extra mile to assure them of our commitment to them and their families, and that they should feel safe here—that they belong.”

Nabel thanked residents and attendees for demonstrating their support at the rally, urging everyone to continue making their voices heard before the public comment period ends on Monday, Dec. 10.

View more photos from the rally