Standing on the roof of the Tower – 262 feet in the air, to be exact – Brigham leaders and staff watched in awe as a Boston MedFlight helicopter made its inaugural landing atop the hospital’s new helipad.

Braving the chilly temperatures and winds on the Tower roof, representatives from the Brigham, Boston Children’s Hospital (BCH), Boston MedFlight and members of the project’s design team came together on Oct. 16 to celebrate the completion of the helipad, which officially opened for use the following day.

Speakers congratulated the teams from the various institutions for their work over the last few years to plan, design and construct the new helipad, which will be used jointly by the Brigham and BCH. The landing site replaces the Brigham’s former helipad on the Mary Horrigan Connors Center for Women and Newborns (CWN). 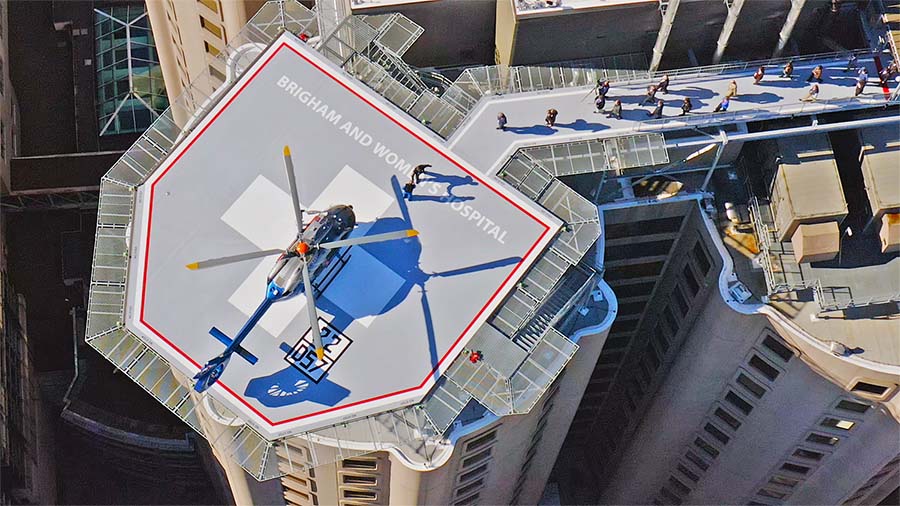 “Thanks to the incredible work of Boston MedFlight, patients start that world-class continuum of care long before being placed in the helicopter, and it continues all the way through their experience here or at BCH,” Walls said.

The helipad was relocated to accommodate a building project at BCH that, upon completion, would interrupt the flight path to the CWN landing site. As an added benefit, the new helipad provides improved obstruction clearance for aircrafts, ensuring greater safety during landing and takeoff on the Tower. Crews began construction on the Tower roof last October.

Throughout the project, many teams and departments at the Brigham, BCH and Boston MedFlight collaborated to complete the relocation without disrupting patient care.

“It was an extraordinary effort, and I want to thank everyone who had a hand in making this construction project such a success,” said Steve Dempsey, executive director of Planning and Construction at the Brigham, noting that more than two dozen departments were involved in different aspects of the overall project.

Aside from the new location, there are a few other differences between the current and former helipads: The Tower landing site is 50 feet higher in elevation, driving a need for crews to raise two of the building’s service elevators by two stories to match its height. Additionally, the new helipad is larger than its predecessor. This expansion enables the Tower site to support the landing of a U.S. Coast Guard Jayhawk helicopter – a larger, heavier aircraft than MedFlight choppers – which the Coast Guard uses to conduct medical evacuations from offshore environments. The Brigham is the first Longwood Medical Area hospital with a helipad capable of accommodating the Jayhawk.

“This helipad is representative of what both Boston Children’s Hospital and the Brigham do every day – providing incredible, lifesaving care,” said Hogarty.

View a photo gallery from the event.