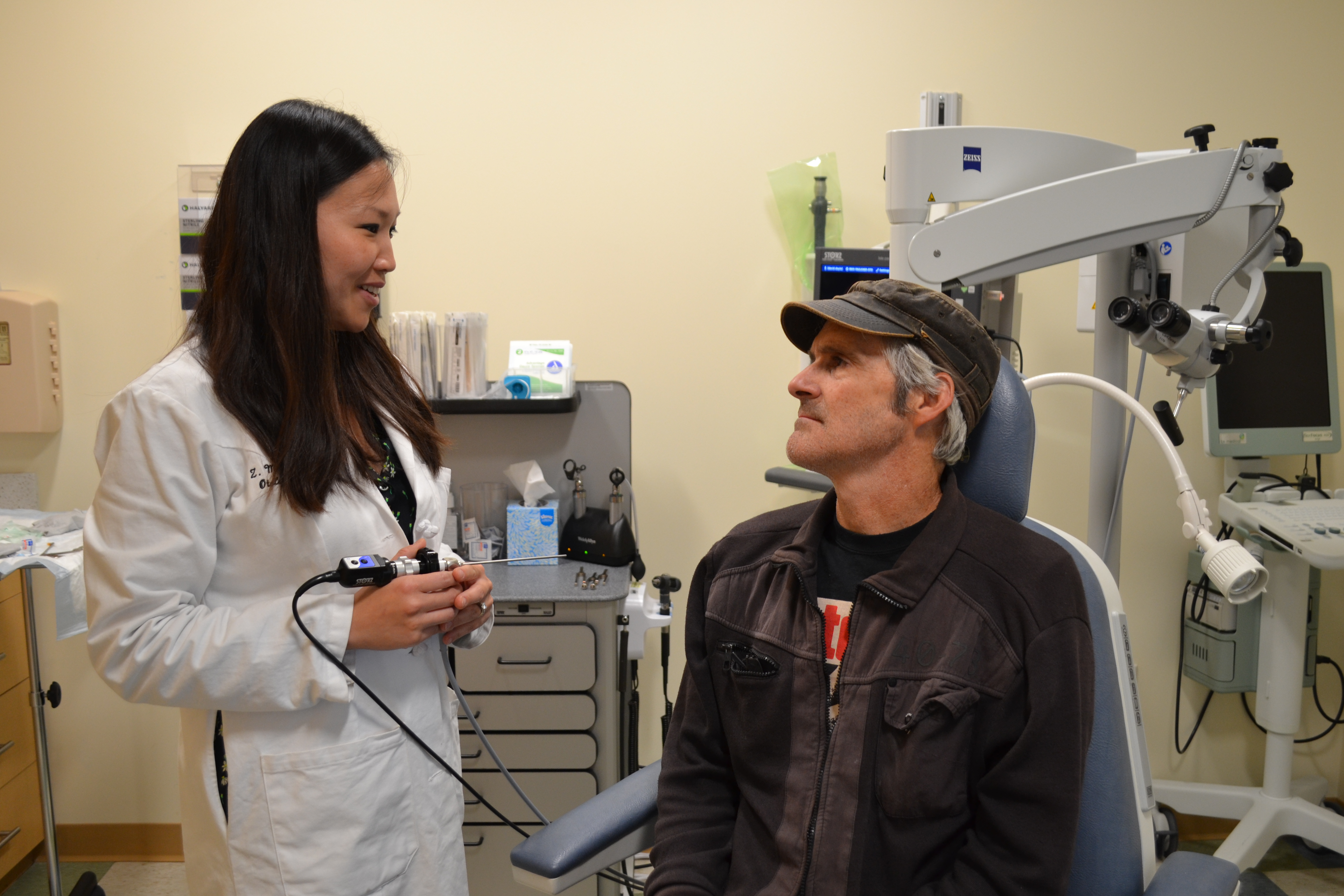 From left: Alice Maxfield speaks with David Doyle during a recent follow-up appointment.

For David Doyle, 54, taking in the flavors and aromas of food is more than his passion – as co-owner of several restaurants in Jamaica Plain, it’s also his livelihood. So when what seemed like unusually intense seasonal allergies caused his senses of smell and taste to diminish three years ago, Doyle grew concerned.

First experiencing severe nasal and chest congestion, he tried several over-the-counter allergy medications. Nothing worked – in fact, his symptoms worsened. Within a few months, Doyle not only felt miserable physically, but he was also devastated to find he could no longer smell or taste anything.

“I didn’t really want to eat because there was no joy in it,” Doyle said. “On a professional level, it was also really hard to work with these great chefs who would ask, ‘David, can you taste this?’ and all I could comment on was the texture.”

Hoping his symptoms would eventually subside, he continued taking allergy medications and pain relievers, even though their effects were minimal. It wasn’t until after suffering a frightening medical event that Doyle would learn the very medications he was taking to feel better were actually making him sick.

Doyle was on vacation with his family in Spain when he realized something was gravely wrong with his health. Suffering from a bad headache and congestion, he took some ibuprofen, a treatment he had used before without incident. This time, however, he began experiencing serious respiratory distress within a few hours and was rushed to a local hospital.

“My lungs were filled with fluid. I felt like I was suffocating,” Doyle said. “I had no idea what had prompted that reaction, but I was starting to suspect something had changed inside me.”

After returning home, he was referred by his primary care provider to Tanya Laidlaw, MD, director of Translational Research in Allergy in the Division of Rheumatology, Immunology and Allergy, who diagnosed him with aspirin-exacerbated respiratory disease (AERD). Triggered by a sensitivity to aspirin and other non-steroidal anti-inflammatory drugs (NSAIDs) like ibuprofen, AERD is a chronic condition that includes severe asthma and recurrent, fast-growing nasal polyps.

Also known as Samter’s Triad, the disease often strikes otherwise healthy adults and progresses rapidly. Its cause is unknown, and effective treatments are elusive.

“This is a disease that is really not well-known and is underdiagnosed,” said Laidlaw, who also serves as director of the Brigham’s AERD Center. “It requires a multidisciplinary approach, particularly between ear, nose and throat surgeons and allergists – specialists who don’t ordinarily talk to each other about patients with these symptoms. Without that communication, an ENT surgeon is unlikely to ask about an aspirin allergy, and an allergist doesn’t typically look for nasal polyps.”

Founded five years ago, the Brigham’s AERD Center brings together allergists, ENT surgeons and researchers to explore new treatments and improve the lives of patients with AERD. The center’s clinicians diagnose and treat hundreds of patients per year, and its investigators manage an international research registry of more than 1,000 people with AERD. Combined with its robust clinical trials program, these efforts make the Brigham’s AERD Center the largest clinical and research center for the disease worldwide.

“We have an incredibly collaborative relationship between bench scientists and those of us who see this disease in patients,” Laidlaw said. “We are all in constant communication. Every patient with an aspirin allergy seen by an ENT surgeon is likely referred to us. That proves education can solve the diagnosis gap. However, there is still an enormous need for broader awareness and research funding.”

Upon returning home and beginning treatment at the Brigham, Doyle enrolled in a clinical trial at the AERD Center to initiate high-dose aspirin treatment, which involves administering increasing doses of aspirin to patients and closely monitoring them for the next several hours.

After starting this daily therapy and seeing only marginal improvement, Doyle underwent two surgeries to remove nasal polyps under the care of Alice Maxfield, MD, an ENT surgeon in the Department of Otolaryngology. A third procedure adjusted the blood flow in his nose to reduce inflammation. Within days of the last surgery, Doyle said he felt dramatically better.

Today, Doyle estimates he’s recovered about 90 percent of his senses of taste and smell, and his respiratory symptoms are largely under control. Although it was a long road, Doyle said he is deeply grateful for the expert, compassionate care he has received at the Brigham.

“I feel like my experience mirrors many others with AERD. It’s really frightening to develop symptoms that don’t make sense to you, so it was a huge relief just to know what was happening,” he said. “My hope is more clinical trials will shed light on not only the causes of this disease but also treatments for it.”

Shortly after recovering from his final surgery, Doyle and his family returned to Europe to vacation in Italy. It was on this trip that he realized his senses started to return. The first food he remembers tasting? Truffles.