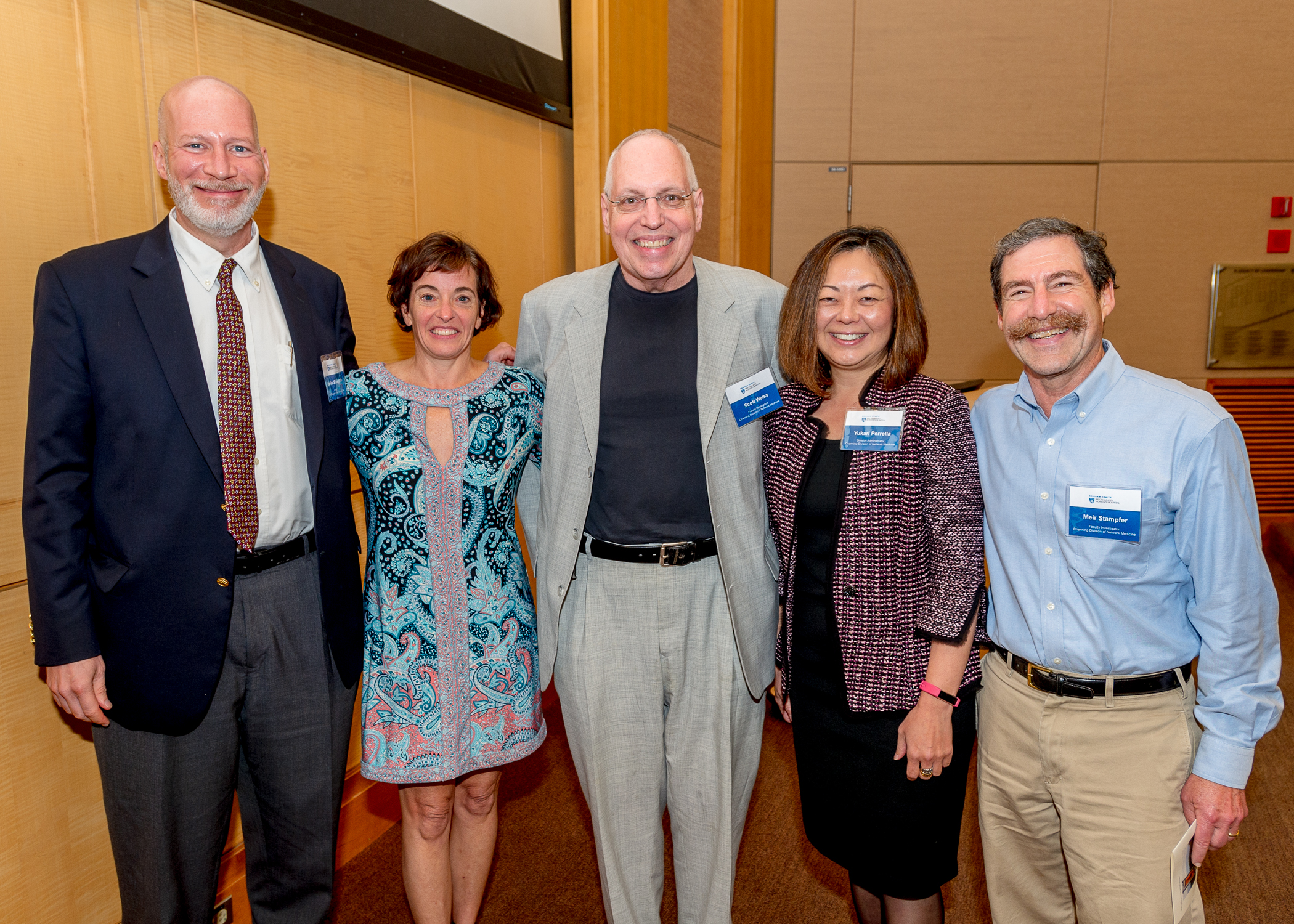 When Fran Grodstein, ScD, associate director of the Channing Division of Network Medicine and director of its Chronic Disease Epidemiology Unit, reflects on the many seminal discoveries made by Channing investigators over the past 50 years, there is no shortage of groundbreaking research that comes to mind.

Underpinning all of those accomplishments – from findings about the risks associated with consuming foods containing trans fats to the role of aspirin in preventing colorectal cancer – is not just academic excellence. Equally essential has been the Channing’s longstanding culture of professional and personal support that inspires dedication to its mission, Grodstein told an audience of investigators, clinicians and staff during a recent event celebrating the Channing’s 50th anniversary.

“It’s a true culture of kindness, generosity and support that I have absolutely no doubt is the only reason we’ve remained as successful as we have been,” said Grodstein, one of several speakers at the ceremony and symposium commemorating the Channing’s anniversary milestone in Bornstein Amphitheater on Sept. 20.

In 1968, the Channing Laboratory became an independent research entity at Boston City Hospital with its own building on Albany Street. The Channing moved to Longwood Avenue in 1977 and joined what is now the BWH Department of Medicine. In 2012, it became the Channing Division of Network Medicine.

Edwin Silverman, MD, PhD, chief of the division, chronicled his own history with the Channing and reflected on the many opportunities it has given him to learn and grow. Joining the lab as a postdoctoral fellow in 1994, he established the Boston Early-Onset Chronic Obstructive Pulmonary Disease (COPD) Study, which sought to identify genetic factors associated with the disease in young people.

Silverman recalled driving 40,000 miles over four years to administer questionnaires, perform breathing tests and collect blood samples in participants’ homes. A map illustrating those travels still hangs in his office as a reminder of those early days.

Over the years, he said, it has been exciting to witness the extraordinary research contributions made by Channing scientists and staff. Numerous studies transformed the perception of COPD from a purely smoking-related to disease to one defined by both genetic and environmental risk factors.

Silverman also highlighted several discoveries that led directly to U.S. policy changes to improve public health, including the labeling and removal of trans fats in foods after Channing researchers in the Nurses Health Study found a link between trans fats and increased risk of coronary heart disease and overall mortality. In another example, Channing-led research resulted in changes to federal environmental regulations after investigators showed that fine-particulate air pollution levels were associated with increased mortality.

“A key principle in all of this has been the willingness and ability to integrate population-based research, laboratory research and innovative data analysis,” Silverman said.

Looking ahead, the division will continue its multidisciplinary research studies of many diseases, while working to intensively develop research programs in three major areas of study: healthy aging, the microbiome and the study of multiple “omics” (a term referring to the group of sciences ending in the suffix “-omics,” such as genomics and metabolomics) to better understand what causes complex diseases to emerge and progress.

“I am very proud of what Channing investigators have accomplished, both historically and in the current era,” said Joseph Loscalzo, MD, PhD, chair of Medicine and physician-in-chief at BWH. “But I’m even more excited about what Channing investigators will contribute in the future as their approach to big data, systems analysis, systems dynamics and network medicine come to full fruition.”

Brigham Health President Betsy Nabel, MD, applauded the division for its remarkable work and commitment to improving public health over the past five decades.

“I want to congratulate and thank all of you, the entire Channing team – including investigators, staff and trainees – for your valuable contributions to the Brigham, to our knowledge of medicine and all that you’ve done for our patients and families,” Nabel said.