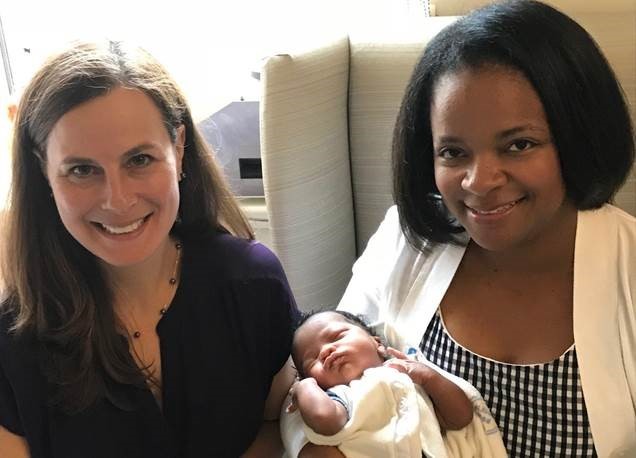 During a prenatal visit for their second child, Valencia and Jude Koomson were surprised to learn Valencia had pre-eclampsia, a form of high blood pressure that can occur during pregnancy. The diagnosis, just 28 weeks into her pregnancy, led to immediate hospitalization and, within days, the premature birth of their son.

That was the best option for the health of both Valencia and baby Justin, born 12 weeks before his due date and weighing just over 3 pounds. He would require intensive support to continue to grow and develop in the Brigham’s Neonatal Intensive Care Unit (NICU).

With breathing assistance for Justin’s developing lungs and a feeding tube to deliver human breast milk to his belly, he grew and thrived. He soon graduated from the Intensive Support area to the Growth and Development area, no longer needing oxygen support and becoming strong enough to feed on his own.

One novel technology available to him was a breast milk analyzer, a device that assesses nutritional composition of human breast milk. Justin was among the first babies enrolled in a new study at BWH to examine whether knowing the exact nutrition in individual feedings of human milk, and adding the right nutrients (also known as fortification), could aid the smallest babies.

“We know that more optimal nutrition is a predictor of better growth and neurodevelopment,” said Mandy Brown Belfort, MD, MPH, of the Department of Pediatric Newborn Medicine.

Human breast milk is uniquely equipped to meet nutritional needs of full-term infants. But pre-term babies – especially those born before 35 to 36 weeks’ gestation – generally require that a fortifier containing calories, protein, calcium and micronutrients such as zinc and Vitamin A be added to a breast milk diet. This aims to replicate the nutrition the baby would receive from the mother’s placenta if still in the womb.

Typically, a premature infant’s growth is followed carefully, but the fortifier is only adjusted if the baby’s weight gain slows over several days. Belfort and her team are using the milk analyzer to avoid this lag, with the goal of delivering accurate, customized fortification with each feeding.

The milk analyzer was initially developed and used in the dairy industry. Recently adapted for human breast milk, it is approved for use in Europe and Canada. In the United States, it is currently available only for research purposes. BWH is one of a few NICUs engaged in that research.

Prior research by Belfort and others has shown surprising variations in the nutritional composition of a mother’s milk throughout a given day. Nutritional makeup also varies from one mother to the next, and it is not necessarily related to the mother’s diet. It’s also known that nutritional quality can degrade as expressed milk is handled and stored.

In Belfort’s current study, each feeding of milk is sampled and analyzed using the countertop device that sits in the NICU’s milk storage room. A tiny syringe, containing less than a teaspoon of milk, is inserted into the analyzer. A readout shows within seconds the milk’s nutritional elements. The results determine how much fortifier should be added on top of the standard fortifier to ensure that nutrient targets are met.

Study results won’t be known immediately as to whether this nutritional fine-tuning will improve growth and development in pre-term babies. The first patients began in the study in spring 2018. Belfort’s team is continuing to offer NICU families the opportunity to volunteer.

Valencia, a scientist herself, was glad to know that she was giving her baby every opportunity to grow, while contributing to newborn science.

“We are thrilled and blessed that he could participate to customize his feedings to his specific nutritional needs,” Valencia said. “Particularly for NICU mothers, there is so much anxiety and uncertainty about what your baby needs. It’s a great comfort to know he’s being fed well here. A baby needs to eat to grow.”

She also expressed her gratitude for the high-quality, compassionate care that she and her family received.

“All the people here are so consistently amazing,” Valencia said. “I want to say a big thank you to the staff at Brigham and Women’s Hospital and the NICU. At all levels of staff, there are such wonderful, caring and loving people here.”